Two of China’s largest English-language state newspapers, the Global Times and the People’s Daily, published an illustration this weekend and on Monday showing what appeared to be a BBC reporter in Ku Klux Klan garb, interviewing a scarecrow in a field worked by black slaves.

The CGI illustration, by “patriotic cartoonist” Wuheqilin, depicts three people as Klansmen: a cameraman, a reporter, and someone in what appears to be a security guard uniform holding up the scarecrow.

“Can you tell us what unfair treatment you have suffered, Miss Scarecrow?” the reporter Klansman asks the scarecrow, who is decorated with a sign that reads “I’ve been sexually assaulted and abused.” The interview appears to take place in a cotton field worked by black slaves — apparently a reference to antebellum America. The scarecrow appears to represent the Uyghur people, as it is wearing Uyghur clothing. The Chinese Communist Party has been subjecting the Uyghur people to genocide and, extensive evidence shows, slave labor in the cotton fields of their native land, Xinjiang. 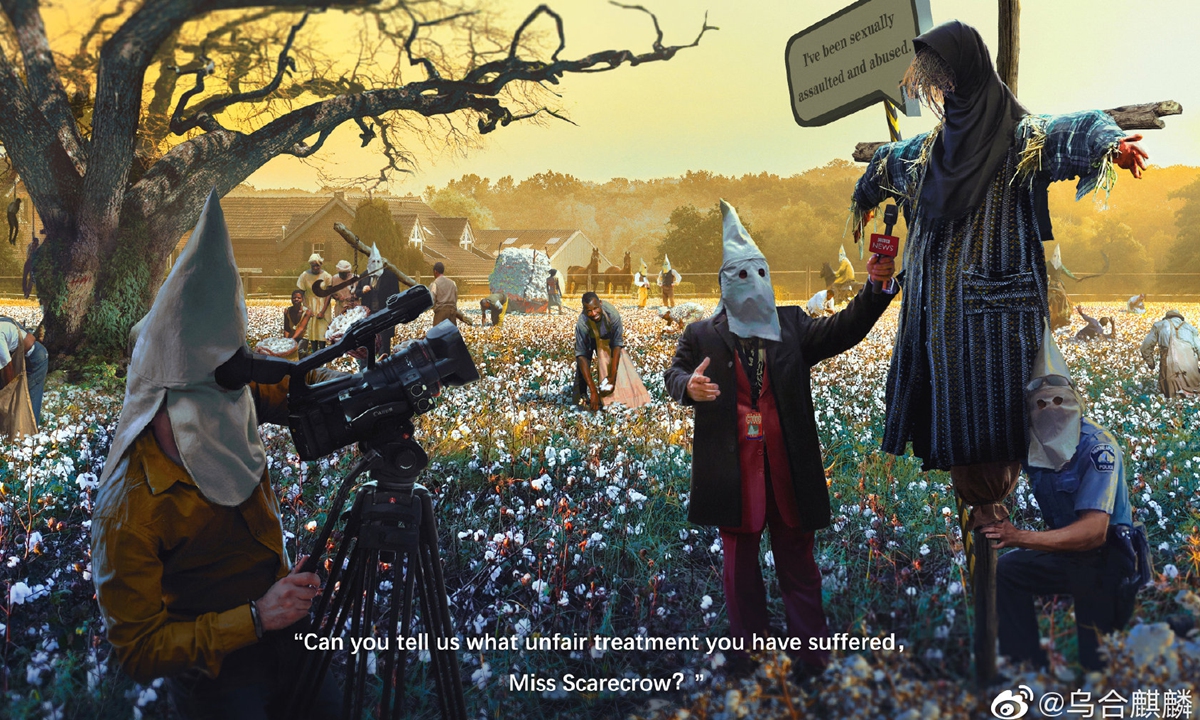 The illustration appeared to be a condemnation of Western media outlets that have devoted time to researching the genocide of the Uyghur people and other Muslim ethnic minority groups in Xinjiang. In February, the BBC published an extensive report, including on-the-record interviews with survivors of China’s Uyghur concentration camps, detailing the extent of the abuses and tortures that those imprisoned in the camps endure. Satellite evidence indicates the Chinese Communist Party has built over 1,000 concentration camps in Xinjiang housing as many as 3 million people at their peak. Beijing claims the camps are schools where poor people learn trade skills.

In reality, as the BBC report detailed, survivors endure regular, nightly gang rapes at the hands of unidentified men tied to the state. Some endure sexual torture, including the electrocution of genitals with penetrative batons.

“They don’t only rape but also bite all over your body, you don’t know if they are human or animal … They didn’t spare any part of the body, they bit everywhere leaving horrible marks. It was disgusting to look at,” one witness told the BBC.

The “patriotic cartoonist” appears to have confused the BBC report with several other studies published by academic experts, most prominently Dr. Adrian Zenz, on the use of Uyghur slaves to man cotton fields in Xinjiang. Xinjiang produces about 20 percent of the world’s cotton. A report published by Zenz in December revealed China is using mobile phone applications to organize the mass enslavement of Uyghur people for the purpose of picking and processing cotton, a claim China denies without refuting the evidence. Zenz’s report estimated China has enslaved over half a million people in its cotton trade.

The report in question was notably not a BBC publication. The BBC is also a British company; the Ku Klux Klan was founded in America and is not believed to have any significant British presence. Neither Britain nor the United States currently maintains slave-worked cotton fields, as China does.

Despite the offensive and inaccurate nature of the computer illustration, the government-run Global Times praised Wuheqilin on Saturday, claiming the “painting” had become extremely popular on Chinese government-run social media in light of a government campaign to shame international companies that have distanced themselves from China’s slave trade. The state newspaper described the illustration as “satire.”

“The piece received nearly 20,000 comments, 450,000 likes and was reposted more than 101,700 times as of press time. The topic has also trended among the top three on Weibo,” the Global Times claimed, referring to China’s largest legal, and thus government-controlled, social media site. “The satire piece touched the heart of many netizens, who have been engulfed in anger and grievance over the deliberate smearing and disinformation from the Western media on Xinjiang cotton.”

The promotion of the illustration follows a coordinated campaign against Western apparel companies launched in China last week, seemingly months after the relevant companies had condemned slavery. The two most prominent targets have been H&M and Nike, both of which insisted they were working to keep their supply chains free of Xinjiang cotton in mid-2020. It is not clear why Beijing chose to launch a nationwide boycott attempt last week, though the initial incident that rekindled concern over slavery in China was a report that the Better Cotton Initiative (BCI), an oversight group, suspended licenses to Xinjiang companies last week. Wuheqilin’s “satire” piece is titled “Blood Cotton Initiative.”

Wuheqilin is allegedly a professional artist working in China’s movie industry who has taken on the mantle of “Wolf Warrior artist.” Wolf Warrior is a Chinese propaganda film depicting the alleged might and triumphs of the Chinese military that has become synonymous with the Communist Party’s insulting, obnoxious diplomatic attitude.

In a video profile by the Global Times in June, Wuheqilin expressed frustration with those who opposed the Chinese Communist Party’s rampant human rights atrocities and increased belligerence to its neighbors. He also apparently addressed Hong Kong pro-democracy protesters in particular, describing them as “bewitched.”

“The rise of China is irreversible in history, why don’t they just stand by our side and open their arms for a brighter future?” the artist asked. “Why would they like to be bewitched and become something of no importance in history for very little benefit?”

Wuheqilin’s most famous work to date is a realistic illustration appearing to show an Australian soldier beheading an Afghan child, shared prominently by the Chinese Foreign Ministry with no context or background regarding its nature as a work of fiction.

Shocked by murder of Afghan civilians & prisoners by Australian soldiers. We strongly condemn such acts, &call for holding them accountable. pic.twitter.com/GYOaucoL5D

“Australia is seeking an apology from the Ministry of Foreign Affairs, from the Chinese Government, for this outrageous post. We are also seeking its removal immediately and have also contacted Twitter to take it down immediately,” Australian Prime Minister Scott Morrison said in an infuriated statement in November. “It is utterly outrageous and it cannot be justified on any basis whatsoever. The Chinese government should be totally ashamed of this post. It diminishes them in the world’s eyes.”