“Firefighters worked through the night to contain the blaze and started a cooling process to ensure it does not reignite,” Turkey’s Hürriyet Daily News reported on August 5.

“At the moment, there is no fire that is threatening the plant,” Turkish Energy Minister Fatih Donmez told reporters on the morning of August 5. He said the main units of Kemerkoy Power Plant in Mugla province, including its turbines, were not damaged by the wildfire, which reached the plant’s perimeter late on August 4. Kemerkoy authorities said they did not detect any dangerous emissions coming from the coal power plant following the incident. 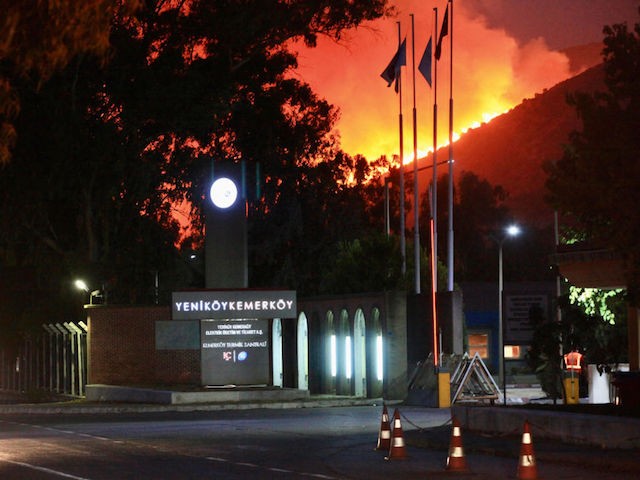 A picture taken on August 3, 2021, shows flames rising from a fire spreading around Yeniköy Kemerköy thermal Power Plant near Oren, in the holiday region of Mugla, as Turkey struggles against its deadliest wildfires in decades. (STR/AFP via Getty Images)

Local firefighters and government officials worked for 48 hours to protect Kemerkoy Power Plant and its surrounding area from the advancing wildfire starting August 3. They evacuated the plant’s employees and residents of Oren, a nearby resort town on the Mediterranean coast, in anticipation of the advancing blaze.

The Turkish Navy deployed vessels to Oren to help ferry people away from the area by sea, Turkey’s Habertürk TV reported. Kemerkoy authorities emptied the plant’s hydrogen tanks and removed all flammable and explosive substances from the site as the wildfire approached, according to Turkey’s state-owned public broadcaster TRT.

A Turkish forestry official on August 5 warned that Kemerkoy Power Plant “and another nearby power station were still at risk due to the unpredictable winds,” according to the AP. 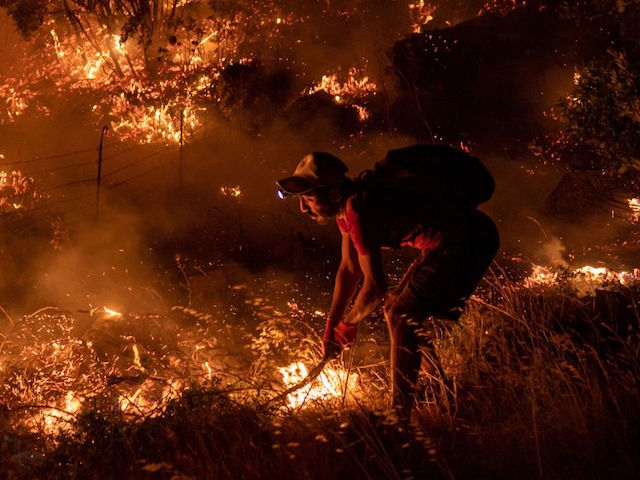 A man tries to extinguish a wildfire spreading in the village of Akcayaka in the area of Milas in the Mugla province, Turkey, on August 6, 2021. (YASIN AKGUL/AFP via Getty Images)

“Authorities blocked roads and were not allowing people to get close to Kemerkoy,” the news agency reported.

“Water tankers and fire trucks have been stationed at the plant in case the fire spreads further towards the main building,” Hürriyet Daily News noted on August 5.

Over 180 wildfires have burned large swathes of forest across Turkey in recent days, killing eight people. The fires have broken out along the perimeter of Turkey’s Mediterranean and Aegean coasts. The wildfires’ collective “radiative power,” or measurable intensity, “has reached unprecedented values in the entire dataset, which goes back to 2003,” according to the European Union’s satellite monitoring service.

Many Turkish citizens have criticized the administration of Turkish President Recep Tayyip Erdoğan for its handling of the country’s wildfires, with some alleging the government was unprepared for the natural disaster. Erdoğan’s administration admitted this week the Turkish government did not have a “useable” fleet of water-dropping planes on hand to douse the wildfires when they first broke out. Ankara has been forced to rely on donated aircraft from several foreign countries including Russia, Iran, Azerbaijan, Ukraine, Croatia, and Spain, to fight its wildfires.

Local mayors of towns in areas affected by Turkey’s wildfires have posted messages on social media in recent days requesting the federal government fly water-dropping planes over their towns. Turkish celebrities have likewise joined in the grassroots campaign for help on social media, with some asking foreign governments to assist Turkey in its fight against the fires. Others claimed they attempted to assist in fighting local wildfires near their residences but were turned away by government officials. 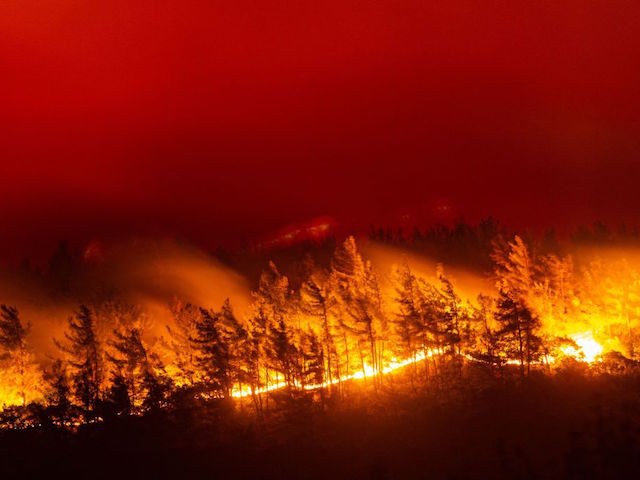 This picture shows flames rising from a forest burning in Akcayaka village in Milas area of the Mugla province, on August 6, 2021. (YASIN AKGUL/AFP via Getty Images)

Turkish police have allegedly arrested some people in connection with their social media postings about the fires.

“In Antalya, security forces discovered videos and photos of a forest fire in the phone of 16-year-old C.Y., who was arrested over his alleged involvement with a forest fire earlier in the week,” Ahval News reported Thursday.