The Afghan media outlet Pajhwok reported on Friday that Taliban jihadists announced a ban on all music and the broadcast of women’s and girls’ voices in at least one province.

The edict reportedly came down in Ghor province, following reports from Kabul that jihadists invaded major news network headquarters and banned women journalists from going to work. Taliban spokesman Zabihullah Mujahid promised in a press conference on Tuesday that the radical Islamist terrorist organization would not interfere with media activities that did not contradict the group’s interpretation of sharia, or Islamic law. 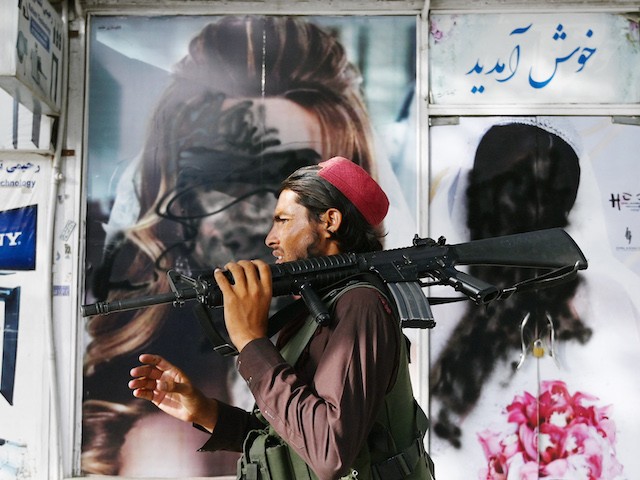 A Taliban fighter walks past a beauty salon with images of women defaced using spray paint in Shar-e-Naw in Kabul on August 18, 2021. (Photo by Wakil Kohsar/AFP via Getty Images)

Under the Taliban’s rule prior to the 2001 American invasion of Afghanistan, the regime forbade women from working, leaving their homes without a full-body covering (burqa), and denied women almost every basic right recognized by international human rights institutions. Current Taliban spokesmen have insisted that their rule would respect women’s rights this time, vowing an “inclusive” government.

The Taliban returned to power on Sunday after surrounding Kabul, the nation’s capital. Taliban jihadists launched a campaign to conquer the nation in April, following President Joe Biden’s announcement that he would not honor an agreement brokered by predecessor Donald Trump that required U.S. forces to leave the country by May 1. Between April and July, the Taliban launched 22,000 individual attacks, according to the former Afghan government.

“Media officials in Ghor say that although all local media outlets have been shut down since the Taliban took control of Ghor province, the group has been unable to resume broadcasting due to strict rules,” Pajhwok reported on Friday. 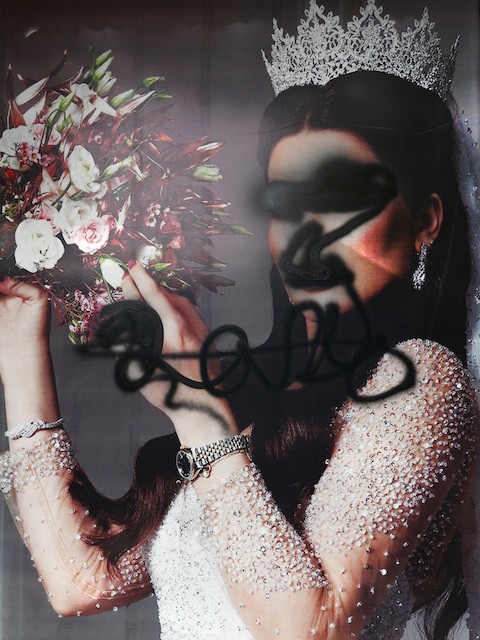 The facade of a beauty salon is pictured with an image of a woman defaced using spray paint in Shar-e-Naw in Kabul on August 18, 2021. (Photo by Wakil Kohsar/AFP via Getty Images)

“The head of culture information of the Islamic Emirate [the Taliban] in Ghor asked us not to publish music in our programs, not to hire female employees,” Maroof Saeedi, the director of the regional Ghorbeh Border Radio, told Pajhwok, “and even the listeners who call in our programs should not publish the voices of girls and should not be published in commercial messages.”

The outlet reported that Ghor hosts four media networks, all of which have been forced to broadcast jihadist propaganda since the Taliban took over the country last Sunday.

A Taliban representative told Pajhwok that the reports were false and that the jihadists had not imposed any new media rules in Ghor, urging the network not to report any news not coming directly from Mujahid, the spokesman.

Mujahid told journalists on Tuesday that the Taliban was “committed to media within our cultural frameworks.” 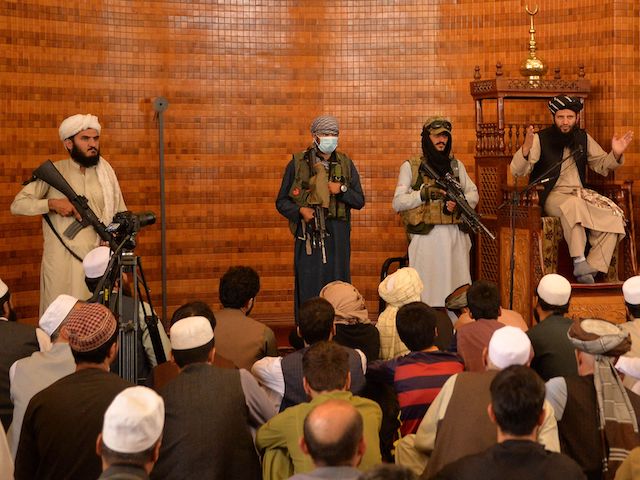 Armed Taliban fighters stand next to an Imam during Friday prayers at the Abdul Rahman Mosque in Kabul on August 20, 2021, following the Taliban’s stunning takeover of Afghanistan. (Hoshang Hashimi/AFP via Getty Images)

The report from Ghor echoes denunciations by outraged women in journalism from Kabul this week who said Taliban jihadis prevented them from going to work. Shabnam Khan Dawran, an anchor for Radio Television Afghanistan (RTA), asserted on Thursday that jihadists did not allow her to enter RTA’s offices and told her never to return because “the regime has changed and you cannot work.”

Another reporter at RTA, Khadija, told Afghanistan’s Tolo News that Taliban jihadists had banned all women from broadcasts and replaced all programming with jihadist propaganda.

Images shared online of televisions in Afghanistan appear to confirm the shift in programming on nearly every major network in the country.

Khadija Amin the new anchor on state TV last week.
Taliban taking over her seat as of Monday.
Ms. Amin told us her boss informed her Taliban have banned women from returning to work at state television.#Afghanistan pic.twitter.com/S4BfISKkaG

After they completion of the Taliban take over of Afghanistan’s second largest city, Radio Kandahar returns to broadcast Koran verses only. pic.twitter.com/UjEg3bFkat

Taliban took control of Afghanistan state tv and started their own broadcast pic.twitter.com/dyVsWP2QNo

Reports of Taliban jihadists conducting door-to-door searches for journalists began spreading as early as Monday, the first full day of Taliban rule after ex-President Ashraf Ghani fled the country on Sunday. Tolo News, one of Afghanistan’s largest news broadcasters, confirmed that it had received a visit from jihadists who confiscated any weapons on the premises and claimed to be present only to ensure the safety of civilians. More sinister reports later surfaced from other journalists on the ground. The German network Deutsche Welle reported that three of their journalists experienced Taliban raids and the Taliban killed a relative of a fourth journalist affiliated with the network.

While reports of Taliban violence outside Kabul are significantly more prolific than in the capital, Khaama Press, an Afghan news outlet, reported on Thursday that the terrorists had imposed a 9 p.m. curfew in the city. While Taliban leaders in the city had not announced a ban on music or women wearing pants, Khaama reports that civilians have largely abstained from both out of fear of retribution.
Follow Frances Martel on Facebook and Twitter.