North Korea shut its borders in early 2020 to prevent the spread of the Chinese coronavirus. The country’s most important border economically is with China; the policy move resulted in a freeze of pivotal imports from Pyongyang’s communist ally. Nationwide floods extensively damaging North Korea’s crops exacerbated a food shortage situation already dire as a result of import limits.

While Pyongyang has yet to publicly encourage North Koreans to simply limit their food consumption, state media arms have begun touting bizarre sources of nutrition as alternatives to real food, among them rare black swans.

“Black swans are rare, ornamental birds. Their meat is delicious and has medicinal value,” the South China Morning Post quoted the official newspaper of the North Korean communist regime, Rodong Sinmun, as declaring last week. “Foundations have been laid to breed them on an industrial scale in order to actively contribute to improving people’s living standards.”

Another state media arm, DPRK Today, claimed that swan meat “contains immunoglobulin, linoleic acid and anti-carcinogenic materials that are hardly found in other sorts of meat.”

The outlet did not specify what “anti-carcinogenic materials” exist in swan meat. Swan meat is not in regular consumption anywhere in the world, and searches did not yield any scientific studies on the benefits of eating it available in public academic databases.

North Korean state media featured a variety of articles highlighting extremely specific food cultivation programs in an apparent attempt to assure citizens the regime would provide them with the food they need to survive. One article published by the state-run Korean Central News Agency (KCNA) on Wednesday applauded the communist Workers’ Party of Korea (WPK) for “developing the fish farming [sic] on a large scale” and “vigorously.”

“Ryongjong fish, Kinyom fish (silver carp) and other fishes [sic] caught in the farms have been supplied to baby homes, orphanages, primary and middle schools for orphans, homes for the aged and commercial networks,” KCNA claimed. “The history of cage-net fish farming in the country was begun under the detailed guidance of the respected Comrade Kim Jong-un.”

Another article promoted the cultivation of fruit trees in personal homes (they are not technically private, as private property does not exist in North Korea).

“In Anbyon County of Kangwon Province, well-known as a persimmon-production area, there are many families cultivating not only persimmon trees but also other various fruit trees,” according to Monday’s report in KCNA. “According to data available, millions of fruit trees were planted around houses in rural areas throughout the country this year.” 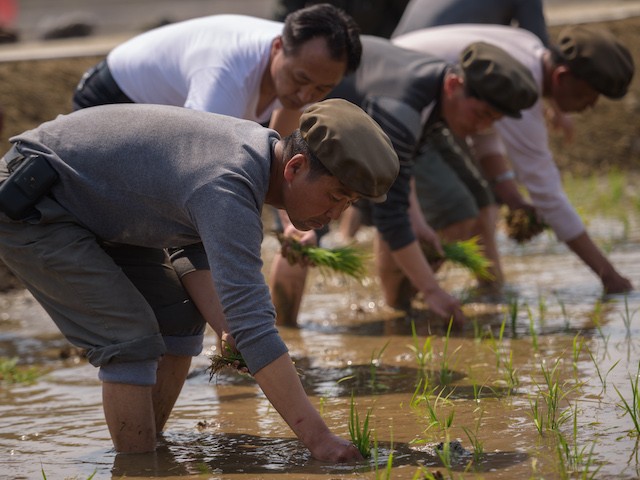 People take part in an annual rice planting event in Nampho City in Chongsan-ri, near Nampho, on May 12, 2019. (Kim Won Jin/AFP via Getty Images)

Rodog Sinmun revealed on Saturday that a regime academic institution had held a “national presentation for mushroom-growing techniques” to encourage residents to “share, popularize, and positively apply the advanced scientific and technical successes and the mushroom-growing experience.”

Anonymous residents of North Korean provinces speaking to Radio Free Asia last week said regime officials on the ground were much less optimistic about the status of the nation’s food supply than state propaganda let on. Local officials, they said, warned that North Korea would not resume trade with China – much of which normally violates international sanctions – until at least 2025 because of the ongoing Chinese coronavirus pandemic. China has failed to curb coronavirus cases within its borders. Half of the country’s provinces are currently enduring some form of emergency coronavirus measures as a result of an outbreak originating with travelers from Shanghai.

“Authorities emphasized that the possibility of reopening customs between North Korea and China before 2025 was very slim,” one unnamed North Korean told RFA. “The food situation right now is already clearly an emergency, and the people are struggling with shortages. When the authorities tell them that they need to conserve and consume less food until 2025 … they can do nothing but feel great despair.”

“They say that telling us to endure hardship until 2025 is the same as telling us to starve to death,” an anonymous source said, referring to the popular sentiment currently among North Koreans.

RFA’s sources on the Chinese border stated, according to a report on Tuesday, that Pyongyang had allowed shipments of goods from China via train beginning on Monday. The U.S.-based news agency noted that China was responsible for as much as 90 percent of North Korea’s foreign trade before the Chinese coronavirus pandemic began in Wuhan, China, in late 2019. While the new shipments are reportedly not restoring all of the trade that existed before, they have begun to ease the food shortage panic in the region along the Yalu River border.

“Entire towns saw their commercial activity dry up as freight ships rusted in their harbors from disuse. People who had made a living through the purchase and sale of goods from China were left with no way to support themselves,” RFA noted.