Chinese dictator Xi Jinping, overseer of what is believed to be the world’s largest concentration camp system, threatened to “burn” American President Joe Biden on Monday night if he supported the democratic nation of Taiwan.

Xi referred to Biden as an “old friend” in a virtual conversation that reportedly lasted over three hours, according to Chinese government media sources. The conversation took place on Tuesday morning Beijing time and Monday night Washington time, a fact that the Communist Party’s Global Times gloated belied desperation on the part of the Biden administration to improve ties with the regime. Chinese coverage of the conversation emphasized that Xi browbeat Biden on the issue of Taiwan, a sovereign nation that China insists, incorrectly, is a rogue “province” under its control.

China’s Xinhua News Agency reported that Xi told Biden he would be “compelled to take resolute measures, should the separatist forces for ‘Taiwan independence’ ‘provoke us, force our hands or even cross the red line.'”

“Xi noted the new wave of tensions across the Taiwan Strait, and ascribed the tensions to the repeated attempts by the Taiwan authorities to look for U.S. support for their independence agenda as well as the intention of some Americans to use Taiwan to contain China,” Xinhua reported, adding:

“Such moves are extremely dangerous, just like playing with fire,” Xi said. “Whoever plays with fire will get burnt.”

Xi’s remarks follow preview reporting in the Global Times, a Chinese government propaganda outlet, asserting that “suppressing” Taiwan was at the top of the dictator’s agenda in his conversation with Biden.

The sovereign government of Taiwan operates entirely separately from Beijing. No Beijing government has ever governed the island. Unlike repressive China, Taiwan is a democratic, free state. The United States does not recognize Taiwan’s sovereignty as doing so would automatically sever all diplomatic ties with China, but maintains a strategy known as “strategic ambiguity” in which it adheres to a set of statements – such as “there is only one China” – that do not clarify a position regarding the island.

Biden had alarmed Beijing throughout the past year by making bizarre statements implying that he believed America was treaty-bound to defend the Taiwanese government from a Chinese invasion. In August, Biden said America had a “sacred commitment” to defend Taiwan in the event of an attack; he made similar remarks in October. Biden has also compared America’s relationship with Taiwan to its ties to NATO, a military alliance that requires, via treaty, all members to attack in the event that one suffers a military invasion. The White House has rapidly walked back Biden’s comments each time.

The Global Times relayed on Tuesday that Biden walked back his support for Taiwan.

“On the most sensitive Taiwan question, the two countries reiterated their respective positions. The U.S. stated its standard American ‘one-China policy,’ but Biden articulated that the U.S. does not support ‘Taiwan independence,'” the propaganda outlet reported.

The White House readout of the call did not mention Xi’s warning to Biden that supporting Taiwan would get him “burnt,” nor did it mention Biden explicitly rejecting the reality that Taiwan is a state – though this has been longstanding American policy for decades. It instead focused on Biden reiterating America’s intentionally convoluted policy on the island.

The White House’s interpretation of the call emphasized cooperation.

Biden, it continued, “noted the need for common-sense guardrails to ensure that competition does not veer into conflict and to keep lines of communication open.” 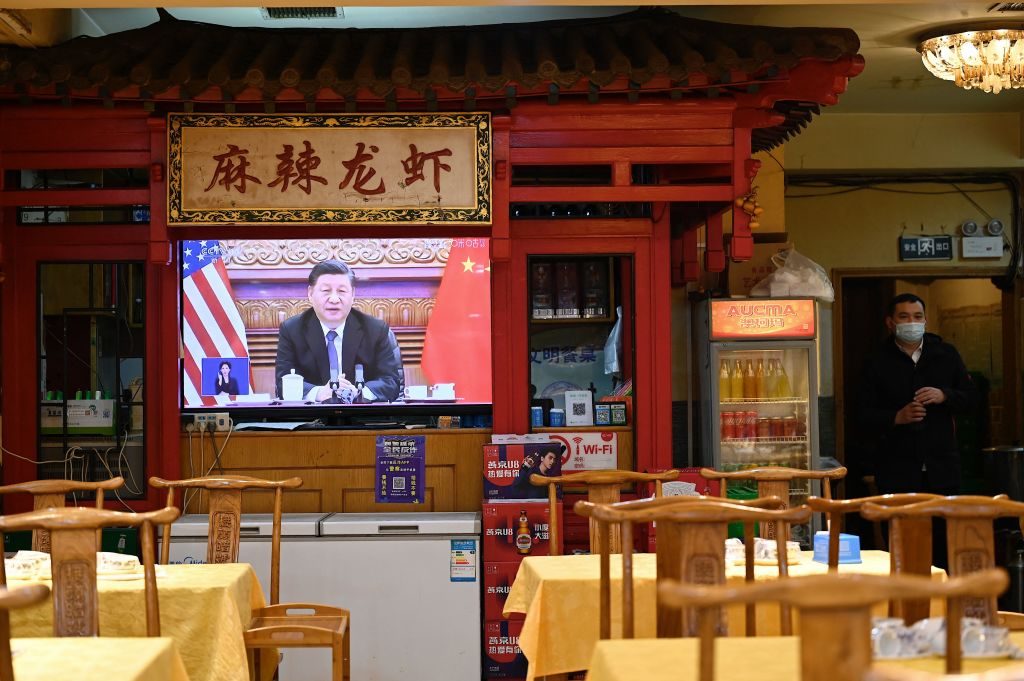 A television screen shows a news program about a virtual meeting between Chinese President Xi Jinping and U.S. President Joe Biden at a restaurant in Beijing on November 16, 2021. (JADE GAO/AFP via Getty Images)

“In particular, the two leaders discussed the existential nature of the climate crisis to the world and the important role that the United States and the PRC [China] play,” the readout continued.

The White House noted that Biden allegedly “raised concerns about the PRC’s practices in Xinjiang, Tibet, and Hong Kong, as well as human rights more broadly.”

Xi Jinping has presided over the construction and maintenance of at least 1,200 concentration camps in Xinjiang, an occupied region locals refer to as East Turkistan, used to torture and indoctrinate millions of members of Muslim ethnic minorities, particularly the Uyghur people.

Tibetans have similarly documented the construction of concentration camps in which survivors say they experienced brutal torture, including systematic rape.

Outside of the camps, extensive evidence suggests the mass enslavement of Uyghurs, sterilization of ethnic minorities, and other policies the Biden administration has asserted constitute genocide, as Breitbart News has extensively reported.

The word “genocide” does not appear in either the White House or Communist Party reports on the Xi-Biden meeting.

Xi unilaterally ended decades of democratic rule in Hong Kong last year with the illegal passage of a “national security” law out of Beijing that criminalizes any dissent from Communist Party ideology. While Hong Kong’s “One Country, Two Systems” policy technically means the law does not apply, Hong Kong police have eagerly abused it to imprison and silence pro-democracy protesters.

Xi has branded any rejection of communism in Hong Kong a form of “separatism” akin to Taiwanese independence.

“Anyone who attempts to split any region from China will perish, with their bodies smashed and bones ground to powder,” Xi said during a speech in Nepal in 2019.

“It seems to me we need to establish some commonsense guardrails, to be clear and honest where we disagree, and work together where our interests intersect, especially on vital global issues like climate change,” Biden told Xi during the public introduction to their conversation before switching to a private setting.