One of the Chinese ships used a water cannon to blast the Philippine boats on November 16 for an entire hour, thwarting their attempt to deliver food supplies to Philippine military personnel stationed at Ayungin Shoal on the BRP Sierra Madre.

“Fortunately, no one was hurt; but our boats had to abort the resupply mission,” Philippine Secretary of Foreign Affairs Teddy Locsin, Jr. said in a statement issued November 17.

The BRP Sierra Madre became a de facto marine outpost after the Philippine Navy intentionally ran the ship aground on Ayungin Shoal in 1999 to stake Manila’s rightful claim to the reef, which has long been illegally claimed by China. 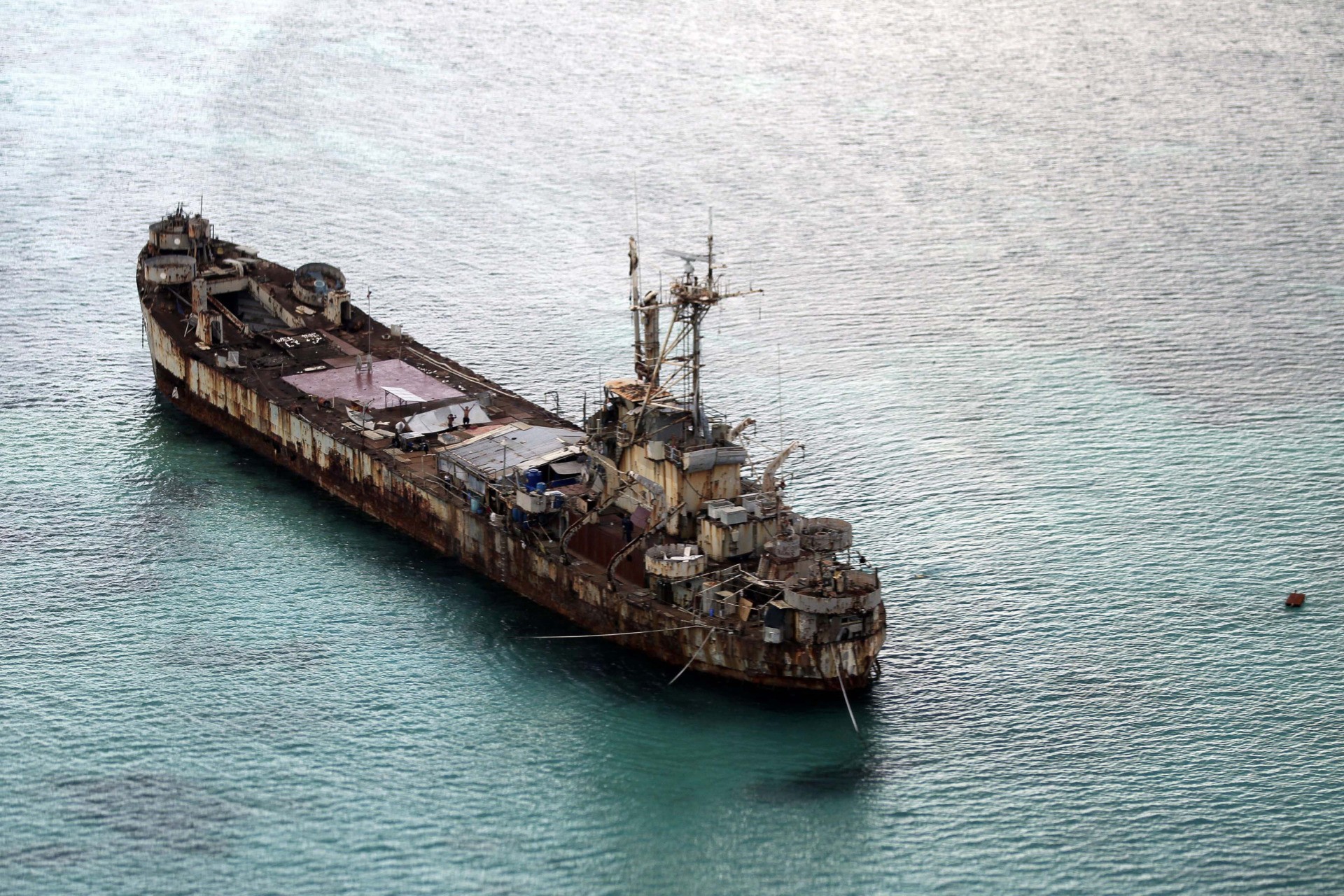 This aerial photo taken through a glass window of a military plane shows the dilapidated Sierra Madre ship of the Philippine Navy anchored near Ayungin Shoal with Filipino soldiers onboard to secure perimeter in the Spratly Islands in the South China Sea on May 11, 2015. Chinese coast guard ships blocked and used water cannons on two Philippine supply boats heading to a disputed shoal occupied by Filipino marines in the South China Sea, provoking an angry protest against China and a warning from the Philippine government that its vessels are covered under a mutual defense treaty with the U.S., Manila’s top diplomat said Thursday, Nov. 18, 2021. (Ritchie B. Tongo/Pool Photo via AP)

Locsin said in his statement on Wednesday he had conveyed “in the strongest terms” Manila’s “outrage, condemnation, and protest” about the Ayungin Shoal incident to China’s ambassador to the Philippines, H.E. Huang Xilian, and to China’s Ministry of Foreign Affairs.

The Philippine foreign minister referred to the Kalayaan Island Group, which is Manila’s name for the Spratly Islands.

“The acts of the Chinese Coast Guard vessels are illegal,” Locsin said Wednesday. “China has no law enforcement rights in and around these areas. They must take heed and back off.”

“The Philippines will continue to provide supplies to our troops in Ayungin Shoal. We do not ask permission to do what we need to do in our territory,” he affirmed.

Beijing illegally claims the entire Spratly Island chain as its own territory, alleging the archipelago lies within the boundaries of its supposed “nine-dash line,” which is an imaginary outline encompassing nearly the entire South China Sea. China continues to push territorial claims citing the “nine-dash line” map despite it being declared unlawful in 2016 by an international arbitration ruling.