Tianjin, a Chinese port city directly bordering Beijing, recorded its “biggest rise in daily cases” of the coronavirus on Monday since a local outbreak of the disease started earlier this month, the South China Morning Post (SCMP) reported.

“The northern Chinese city recorded 80 new local symptomatic cases on Monday [January 17], up from 33 the day before, according to the [Chinese] National Health Commission,” the SCMP relayed.

Travel from Tianjin to Beijing remained restricted as of January 17, according to the newspaper. Chinese Communist Party officials prohibited all of Tianjin’s 15.6 million residents from traveling to Beijing or any destination outside Tianjin on January 9 in response to the municipality’s surging coronavirus caseload.

Tianjin is a major commuter city for Beijing and is located just 30 minutes away from the Chinese national capital via high-speed rail. Chinese Communist Party authorities have been especially vigilant in cutting off travel to Beijing in recent weeks as the city prepares to host the 2022 Winter Olympics from February 4 to February 20. 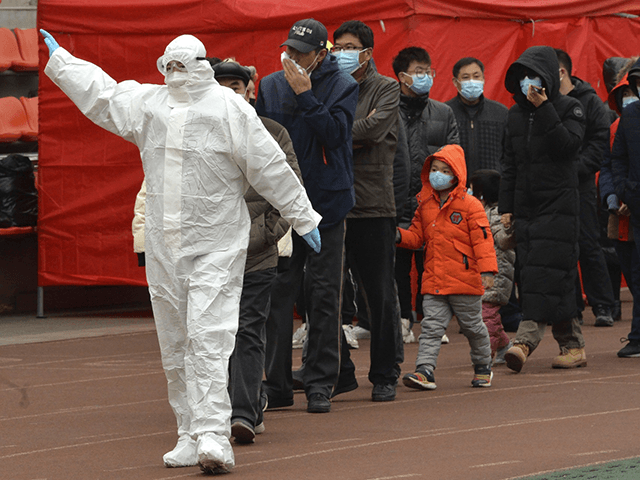 A worker wearing a protective suit gestures to a line of people at a COVID-19 testing site in Tianjin, China, Saturday, Nov. 21, 2020. (Chinatopix via AP)

Tianjin health officials said on January 16 they had recorded 316 new Chinese coronavirus cases as part of the community’s latest outbreak of the disease.

Despite the Chinese Communist Party’s stringent efforts to shield Beijing from Tianjin and greater China’s coronavirus outbreaks, the capital city reported its first new case of the disease’s omicron variant on January 15.

“Officials have sealed up the infected person’s residential compound and workplace, and collected 2,430 samples for testing from people linked to the two locations,” a governing official for Beijing’s Haidian district, where the case was detected, told state media on January 15.

Both Tianjin and Beijing’s latest Chinese coronavirus outbreaks are part of a nationwide resurgence of the disease that has ravaged China for months. The epidemic has prompted China’s ruling Communist Party to lock down an estimated 51.6 million Chinese citizens and residents across the country in recent weeks.