Some 2,000 small animals, including hamsters, will be killed in Hong Kong after several tested positive for the coronavirus Monday at a pet store where an employee was also infected.

AP reports Hong Kong authorities are not ruling out the possibility of transmission between animals and humans as reasoning behind the dramatic culling.

“We cannot exclude the possibility that the shopkeeper was in fact actually infected from the hamsters,” said Edwin Tsui, a controller at the Centre for Health Protection.

“If you own a hamster, you should keep your hamsters at home, do not take them out,” department director Leung Siu-fai said at a news conference. “All pet owners should observe good personal hygiene, and after you have been in contact with animals and their food, you should wash your hands.”

“Do not kiss your pets,” he added.

The Hong Kong move against small pets follows a municipal health worker in south-eastern China’s Shangrao city beating a woman’s pet corgi to death with a crowbar while its owner was undergoing a state-run coronavirus quarantine outside her residence, as Breitbart News reported.

“In a video interview with a local media outlet, the dog’s owner, identified only by her surname Fu, said she witnessed the beating through an app on her phone connected to her home security camera and used a speaker embedded in the camera to beg the workers to leave her dog alone, but her pleas were ignored,” the Wall Street Journal (WSJ) relayed on November 15.

“Ms. Fu said she heard the dog crying off-camera and later saw the workers carrying a yellow bag away after the whimpers stopped. Blood could be seen on the ground afterward, she said,” according to the report. 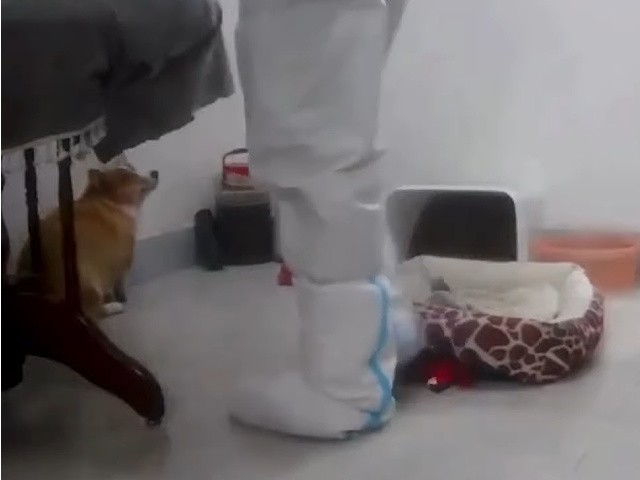 Hong Kong authorities have not detailed how they intend to kill the suspect animals it seeks in the former British colony.