The Chinese government newspaper Global Times broke its unusual silence on the ongoing anti-communist campaign of Boston Celtics player Enes Kanter Freedom on Thursday, dismissing his opposition to genocide in China as a sign that he may be cooperating with the CIA.

Among the “evidence” the Global Times cited that the outspoken basketball player may have ties to covert American government operations was the emergency of a Twitter hashtag and his affiliation with Hizmet, an Islamic movement led by Philadelphia-based cleric Fethullah Gülen. Islamist Turkish President Recep Tayyip Erdogan has brutally repressed anyone accused of following Gülen since 2016, blaming the preacher for the alleged failed coup against him that year. The U.S. government has dismissed Turkish calls for Gülen’s extradition on the grounds that no evidence exists typing him to the alleged failed coup.

While Kanter Freedom has spent many years advocating for the end of the increasingly authoritarian Erdogan regime, last year he shifted focus to China, demanding an end to the genocide of the Turkic Uyghur people of East Turkistan, an end to the cultural genocide of Tibetans in that occupied region, respect for pro-democracy voices in Hong Kong, and recognition of the basic human rights of members of the Falun Gong spiritual movement.

“Freedom was described by some as a ‘hero’ for his radical China remarks focusing on topics such as Xinjiang and [Tibet], which are now new ‘politically explosive’ issues in the U.S.,” the Global Times staff sneered in an editorial published on Thursday. “His so-called outspoken statements have no substantial difference from what the Western media has used to smear China. Many think Freedom is clout-chasing.”

The propaganda newspaper went on to suggest that Kanter Freedom may have traded advocacy for the repressed populations of China for his American citizenship.

“What can one person get in return by hyping ‘politically correct’ issues? Money, prestige, or US citizenship? Freedom may know the answer best,” the Global Times insinuated.

“As Freedom drew headlines with his ‘outspoken’ remarks, ‘Enes Kanter is CIA’ became a meme around the net, with many speculating about his links to Washington,” the outlet claimed. “Danny Haiphong, contributing editor to the Black Agenda Report, told the MintPress, ‘Kanter’s mentor Fathullah [sic] Gulen protected CIA agents and his anti-China operation comes just weeks after the CIA announced a renewed focus on China.'” 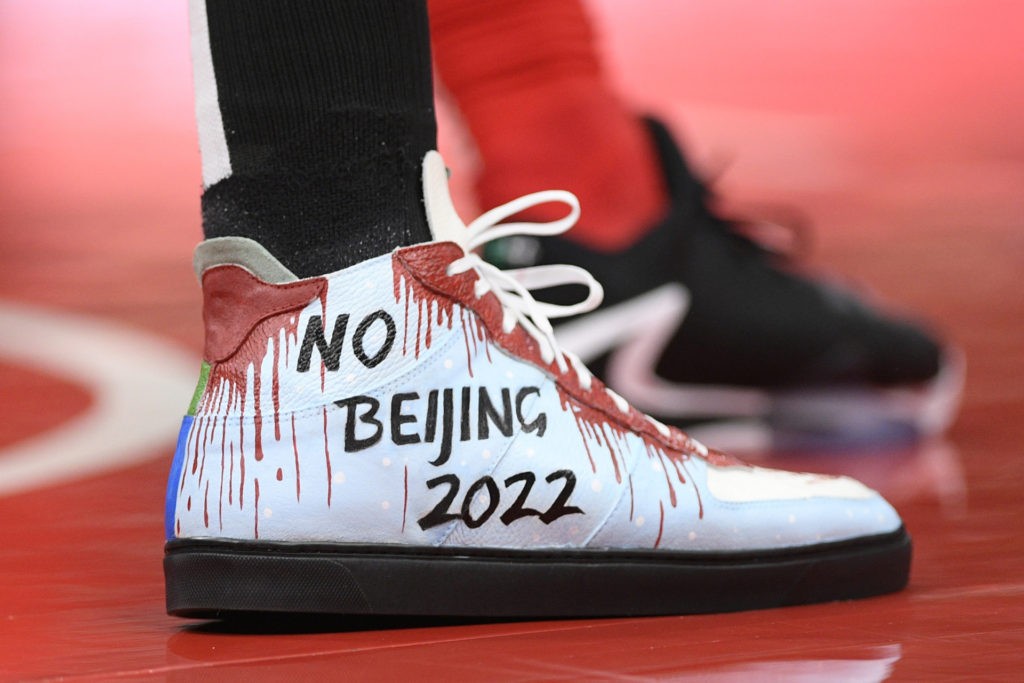 The shoes of Boston Celtics center Enes Kanter as seen during the first half of an NBA basketball game against the Washington Wizards, Saturday, Oct. 30, 2021, in Washington. (AP Photo/Nick Wass)

The Black Agenda Report is a website describing itself as providing “news, commentary, and analysis from the black left.” Haiphong is a former contributor to Chinese state media who has argued in his work that any attempt to seriously investigate the Wuhan Institute of Virology (WIV) for a potential role in the ongoing Chinese coronavirus pandemic is a form of “imperialism.”

The Turkish government has repeatedly levied the same unsubstantiated claim that Gülen has ties to the CIA. In reality, evidence suggests a much more contentious relationship between the American agency and the Islamic religious leader.

“Anyway, Freedom apparently enjoys whatever he is doing now,” the Global Times concluded this week.

The editorial is the first major comment the Global Times, typically the most belligerent English-language propaganda outlet the Chinese Communist Party deploys, has printed since Kanter Freedom’s anti-communist campaign began last year. The Chinese Foreign Ministry mentioned it in passing in October.

“The player you mentioned was clout-chasing, trying to get attention with Tibet-related issues. His wrong remarks are not worth refuting,” Foreign Ministry spokesman Wang Wenbin told reporters at the time.

The muted response to Kanter Freedom – a short commented and the full censorship of all Boston Celtics games in China – stood in stark contrast to the months of outbursts out of the Chinese government in 2019 when Daryl Morey, then general manager of the Houston Rockets, posted a message on Twitter in support of anti-communist protesters in Hong Kong.

Morey’s statement (“fight for freedom, stand with Hong Kong”) was far more tepid than Kanter Freedom’s months of calling dictator Xi Jinping a “brutal dictator,” discussing the harvesting of organs from political prisoners in detail, and wearing shoes illustrated with an image of himself appearing to behead Xi (Xi is depicted as Winnie the Pooh).

Yet the response to Morey in Beijing was far more aggressive. The Global Times compared the peaceful protesters of Hong Kong to al-Qaeda and National Basketball Association (NBA) Commissioner Adam Silver revealed the Communist Party lobbied to get Morey fired.

Prior to the Global Times‘ attacks on Thursday, the Chinese government appeared to express more interest in combatting Kanter Freedom’s campaign against its human rights abuses through Yao Ming, arguably the greatest basketball player in Chinese history and the head of the Chinese Basketball Association (CBA). At an event to promote the 2022 Beijing Winter Olympics – which Kanter Freedom has called for athletes to boycott – Yao invited Kanter Freedom to tour China with him.

“I’m not in a position to comment … but If there’s an opportunity, I hope he could come to China, with me and other basketball fans as his guide,” Yao said. “Seeing China for himself may help them know China in a more comprehensive way.”

Kanter Freedom published a video on social media on Wednesday accepting the invite, but only on the condition that he could witness China’s human rights atrocities in person, meet with missing tennis champion Peng Shuai, and have access to repressed regions like East Turkistan and Tibet.

Yao has yet to respond to the message.