ROME — Pope Francis urged young people to be willing to swim against the tide Sunday, praising by name those who fight in the name of the environment.

“Our world, beset by so many evils, does not need any more ambiguous compromises, people who move back and forth like the tide – wherever the wind blows them, wherever their own interests take them – or swing to the right or left, depending on what is most convenient, those who ‘sit on the fence,’” the pope told young people during his Sunday homily for the feast of Christ the King.

“Those who are always performing a balancing act are looking for ways to avoid getting their hands dirty, so as not to commit their lives, not to take life seriously,” the pontiff warned, while encouraging his hearers to be “the critical conscience of society.”

“Don’t be afraid to criticize! We need your criticism,” Francis continued. “Many of you, for example, are critical of environmental pollution. We need this! Be free in criticism.”

The pope has been a vocal supporter of the Swedish climate activist Greta Thunberg as well as of other young people involved in the fight against climate change. 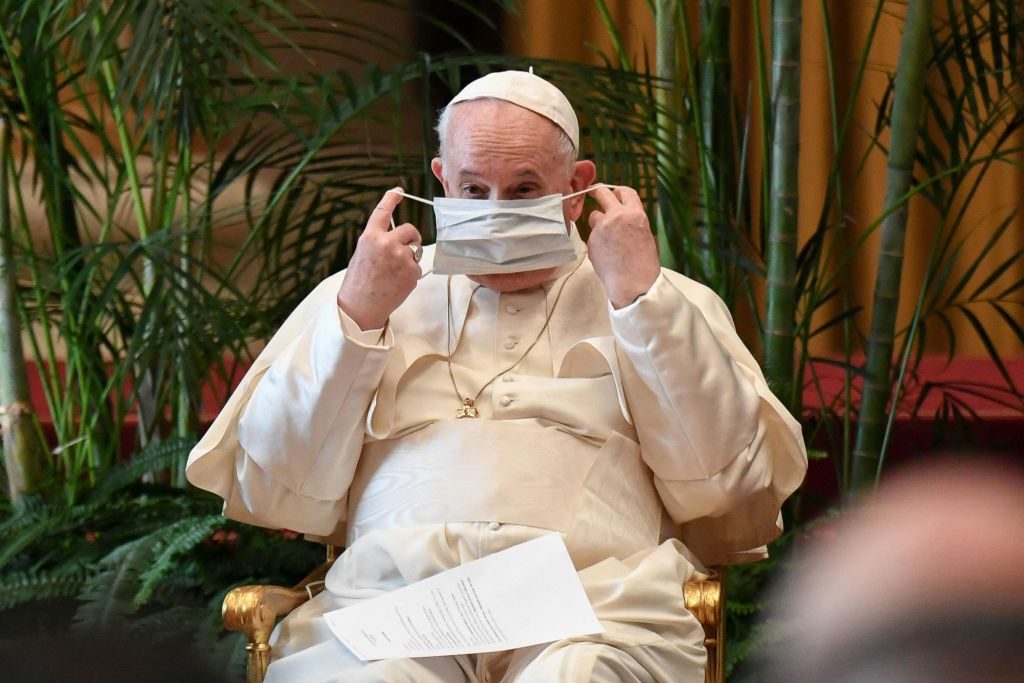 Pope Francis holds his face mask during the meeting “Faith and Science: Towards COP26” on October 4, 2021 in The Vatican, sending an appeal to participants in the 26th United Nations Climate Change Conference, also known as COP26, scheduled from November 1 to 12 in Glasgow, Scotland. (ALESSANDRO DI MEO/POOL/AFP via Getty Images)

In 2019, Francis noted signs of hope for the environment and the climate change battle, “especially in the movements of young ecologists, such as the one led by Greta Thunberg, ‘Fridays for Future.’”

“I saw one of their signs that struck me: ‘We are the future!’” he said.

Earlier that year, the pope had met Thunberg during one of his audiences in the Vatican, and urged her to continue her crusade against climate change. The young Swede was seated in the VIP section in St. Peter’s Square, and the pope recognized her, exclaiming in Spanish “La famosa!” before congratulating her for her work.

Again in 2020, Francis said that young people “have much to offer, thanks to their enthusiasm and commitment,” especially by “calling the attention of political leaders to the issue of climate change.”

Environmental action “ought to be a concern of everyone and not the object of ideological conflict between different views of reality or, much less, between generations,” the pope declared. “The protection of the home given to us by the Creator cannot be neglected or reduced to an elitist concern.”

“Young people are telling us that this cannot be the case, for at every level we are being urgently challenged to protect our common home and to bring the whole human family together to seek a sustainable and integral development,” he continued.

“They remind us of the urgent need for an ecological conversion, which must be understood in an integral way, as a transformation of how we relate to our sisters and brothers, to other living beings, to creation in all its rich variety and to the Creator who is the origin and source of all life,” he said.