Australian Cardinal George Pell has come out against climate alarmism in the third and final volume of his Prison Journal, published this month.

In Pell’s analysis, the hysteria of climate alarmists assumes a distinctly religious ardor, filling a void in the post-Christian West.

“When God is out of the equation and hell is banned from the public imagination, catastrophic climate change fills the gap as the current fear, and many are reluctant to concede that we are powerless in the face of the millennial patterns of climate change,” he asserts.

“But many neo-pagans do finish up fearing something which is not too demanding on them personally,” he suggests. “An atomic war has been replaced by the hypothesis of damaging climate change. It doesn’t seem to matter that even if we did know cause and effect accurately in the climate world, we in Australia could do nothing to change any end result.”

Much ignorance accompanies climate alarmism, Pell proposes, but pandering to fanaticism is never a good plan. 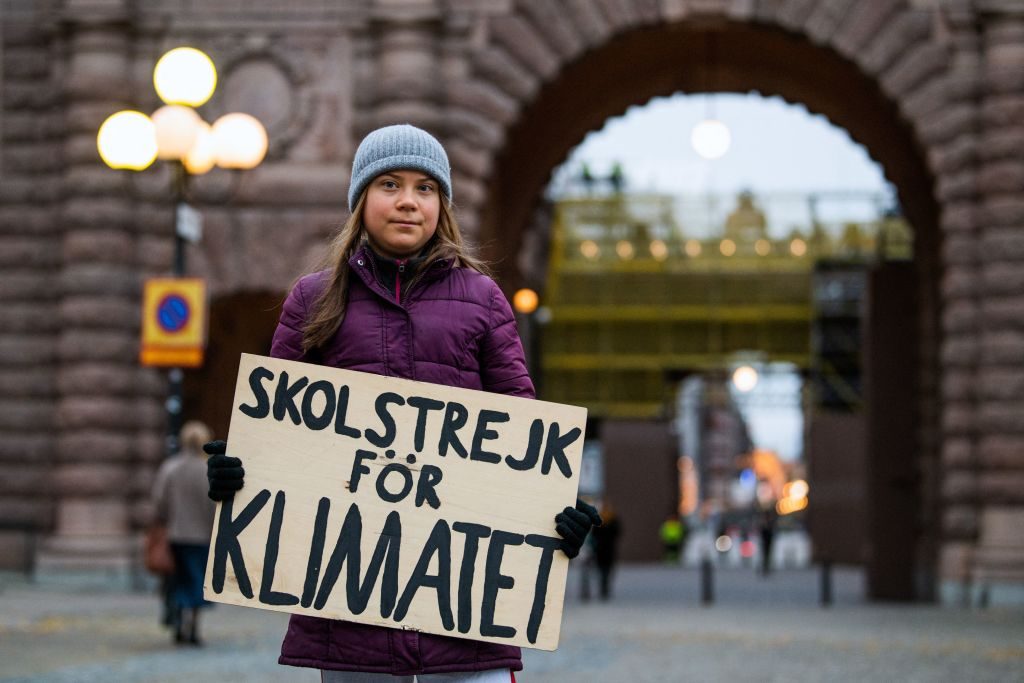 Swedish climate activist Greta Thunberg poses for a picture holding a sign reading “School strike for Climate” as she protests in front of the Swedish Parliament (Riksdagen) in Stockholm on November 19, 2021. (JONATHAN NACKSTRAND/AFP via Getty Images)

“I am not sure how many community leaders, including the politicians, know the basics of the history and science of climate change, understand the uncertainty of the diagnoses and the uselessness of the proposed remedies,” the cardinal states.

“The average world temperature has been increasing in fits, starts, and stops since the Little Ice Age and over the last two hundred years,” he observes. “No computer model so far has predicted accurately future temperature changes or patterns.”

“Billions of dollars are expended on the climate change academic-industrial complex, one of the most expensive follies in history,” he continues. “Somehow it is symbolic that children are not being led up the garden path by the Pied Piper; rather, gullible or cynical adults are being led by a sixteen- year-old girl.”

“What cost increases for electricity, how many power blackouts will be needed before this madness is curbed?” he asks. “The pagan Greeks were onto something when they claimed that those whom the gods wanted to destroy they first made mad.”

Pell also notes that “weather predicting is not an exact science for the weeks or months ahead and even more uncertain when we speak of ‘climate changes,’ which are constituted by blocks of weather for thirty years.”

“Boris Johnson disappointed me by coming out to acknowledge the cloud of carbon dioxide enveloping us, foreshadowing electric cars and announcing a claim to leadership for Britain in this climate-change era,” Pell declares. “He has captured the ‘zeitgeist’ for the moment, but I hope he doesn’t believe the pseudo-science behind it.”

This is not the first time Cardinal Pell has criticized climate change alarmism and the bizarre trappings of the movement.

“I still believe the climate change debate proceeds on the wrong premises, i.e., that increases of carbon dioxide certainly raise the temperature and that we have the human capacity to modify climate (weather over a thirty-year period),” he wrote in the first volume of his Prison Journal, which was released last December.

“We should remember King Canute, who realised he couldn’t stop the incoming tide.”

Pell also expresses concern over the Vatican’s marriage to climate change, noting that it could wind up looking like the Galileo affair in hindsight.

“The climate change movement is now a worldwide financial colossus, ruthless and intolerant, colossally expensive, a useful substitute for religion for too many,” he observes. “Unfortunately, many in the Vatican have jumped onto the climate change bandwagon, despite the encyclical Laudato si’ twice acknowledging that the Church should leave science to the scientists. It could be a mistake like the one the papacy made with Galileo.”

“I suspect history will judge the emphasis on the threat of climate change as bizarre. The climate is always changing, and, despite the bluster, we don’t know what raises global temperatures,” he declares.

And while “it is political suicide to be sceptical of or hostile to the climate-change movement,” he quips, “someone will cry out eventually that the emperor has no clothes.”