The Athens suburb of Nea Smyrni was described as a “war zone” this week as police clashed with far-left rioters for hours, leading to at least 10 police officers being injured and 16 arrests.

The clashes broke out following a protest against police brutality that was attended by around 5,000 people and was supported by the leftist party SYRIZA, which called for and participated in the demonstration.

According to a report from the Greek newspaper Proto Thema, 10 officers were injured after groups of hooded men attacked them with firebombs and rocks. A mob of hooded men pulled one officer off his motorcycle, resulting in the policeman being seriously injured, leading to hospitalisation.

Footage of the mob throwing the officer from his motorcycle and beating him was also caught on camera. Police stated the officer was continuously beaten with sticks for at least two and a half minutes and was kicked while on the ground.

The 24-year-old officer was left motionless in the street for half an hour before an ambulance was able to arrive, as far-left extremists had barricaded the area and set multiple fires. While severely injured, the officer is not in critical condition but is recovering at a local hospital.

Police trade unionist Stavros Balaskas commented on the violence, saying at least 60 people took part in the assault and vowed that the individual who pulled the officer from his motorcycle would be found.

“They wanted him dead,” Balaskas said.

George Kalliakmanis, president of the Police Association of Southeast Attica, said that if support had not arrived to retrieve the injured officer, “he would be dead, and that is exactly what they want. They want a dead policeman.”

Stavros Tzoulakis, the mayor of Nea Smyrni, stated that rioters had damaged several cars, destroyed all the ATMs in the area, and smashed up at least two shops, describing the events as being like a “war zone”.

However, Tzoulakis claimed that as many as four in five of the violent rioters were not locals and that residents of the area were not responsible as they are “civilised and democratic”. 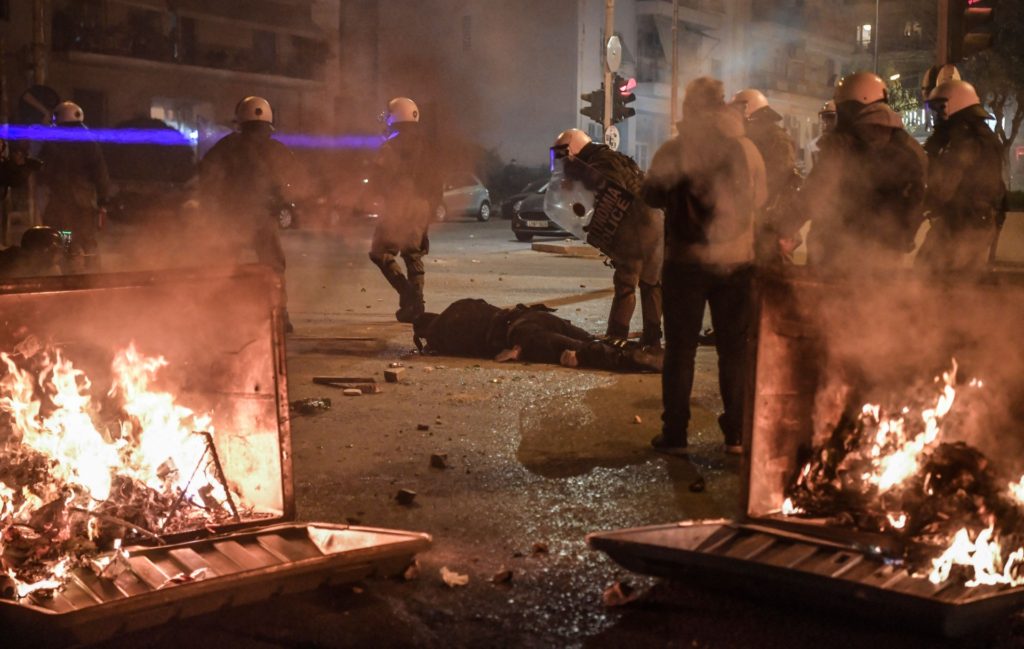 Police stand near burning trash bins as their injured colleague lays in the street during clashes with protesters at a demonstration against police violence in an Athens suburb on March 9, 2021.  (Photo: LOUISA GOULIAMAKI/AFP via Getty Images)

Tzoulakis, along with Greek Prime Minister Kyriakos Mitsotakis, criticised the protest organisers for holding a large demonstration during the Wuhan coronavirus pandemic.

“SYRIZA’s official call for participation in citizen protest rallies in the midst of the pandemic is an act of great irresponsibility,” Prime Minister Mitsotakis said.

The riots were not the only attack on police this week as a group of around 12 people threw at least 20 Molotov cocktails at vehicles in a police parking lot in Patras, Greece’s third-largest city and regional capital of Western Greece, causing damage to both police vehicles and cars that had been impounded.