French President Emmanuel Macron visited Paris’s Notre Dame Cathedral on the second anniversary of its near-total loss to fire, calling for it to reopen for 2024, apparently whether it was ready or not.

Speaking to the workers and craftsmen who have toiled around the clock since the April 2019 fire that gutted Notre Dame, President Emmanuel Macron congratulated those present — remarking “bravo” — but said “very demanding” work lay ahead because “we will have to meet our targets”.

The target the French president refers to is April 15th, 2024, exactly five years after the cathedral started to burn, a mandatory target he himself set in 2019. The date would coincide with the Summer Olympics being hosted by France. 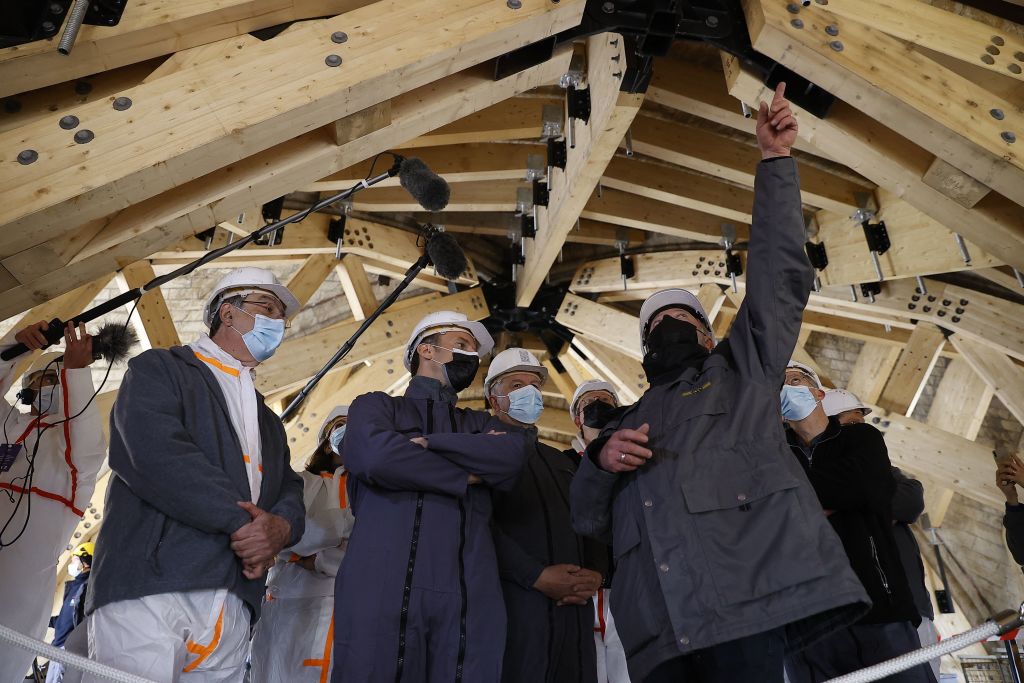 TOPSHOT – French President Emmanuel Macron (2nd L) listens to the architecte in charge of the restoration Philippe Villeneuve (2nd R) next to Jean-Louis Georgelin (C), a former general leading the restoration efforts, Paris’ Archbishop Michel Aupetit (L), and Paris’ mayor Anne Hidalgo, during a visit of Notre-Dame de Paris Cathedral marking two years since the blaze that made the spire collapsed and destroyed much of the roof, in Paris on April 15, 2021. – The actual restoration work has yet to begin as time up until now has been spent on securing the building, and the full restoration works should begin early next year. (Photo by Ian LANGSDON / POOL / AFP)

While the Cathedral may be ‘open’ by presidential decree on that date, those familiar with the project say the rebuild will be far from complete. Two years after the fire, and rebuilding work has not actually commenced yet, as the process of stabilising the stone structure of the church from collapsing after being weakened by the intense blaze is still ongoing.

The actual rebuilding is due to begin by the end of 2021. Retired French General Jean-Louis Georgelin, who is in charge of the rebuild and accompanied President Macron on his tour, underlined this by confirming that Notre Dame would indeed host a Te Deum service of thanksgiving on April 16th 2024, but that building work would still be ongoing at that date, reports Le Parisien.

The Daily Telegraph reports the general’s words to a French radio station when he said: “The goal is to celebrate a service in 2024. Which does not mean that everything will be finished, far from it… We will meet the deadline. We are reaching a critical point in the construction work, the end of the securing phase.”

Notre Dame’s rector Rector Patrick Chauvet said earlier this month that rebuilding the church fully would take “15 to 20” years. Over €800 million (£694m/$957m) has been raised worldwide for the effort. 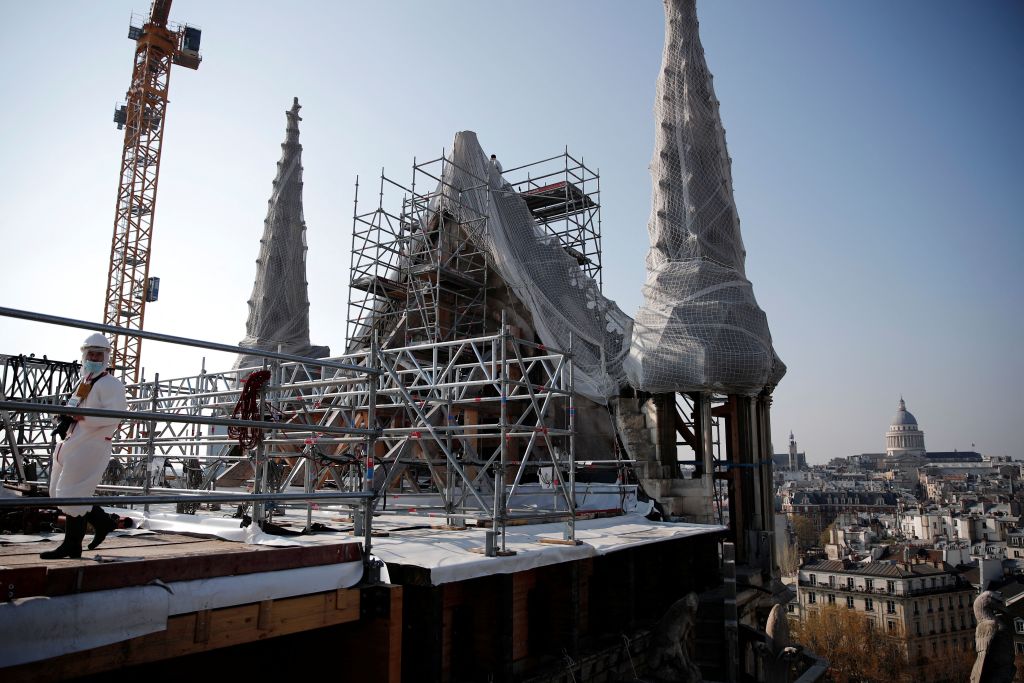 This view partially shows the roof of the Notre-Dame de Paris Cathedral during a visit of French President marking two years since the blaze that made the spire collapsed and destroyed much of the roof, in Paris on April 15, 2021. (Photo by BENOIT TESSIER/POOL/AFP via Getty Images)

While President Macron is pushing to have his 2024 goal honoured, some of his other desires for the rebuild have already been overruled. The French premiere was among the first to support a ‘creative’, non-faithful rebuilding of Notre Dame in the days after the fire. Modernist architects leapt at the chance, proposing a series of major changes including a glass roof and even a crystal spire to replace the timber one that had been destroyed.

The plans were eventually defeated, however, after a bill on the rebuild was bounced between two houses of the French Parliament — with one house in favour of a modernist redesign, the other for a faithful rebuild. The final decision to stick with tradition would annoy “the concrete lobby and iron lovers”, a French newspaper noted at the time. The roof is to be rebuilt in oak and lead, not steel and glass. 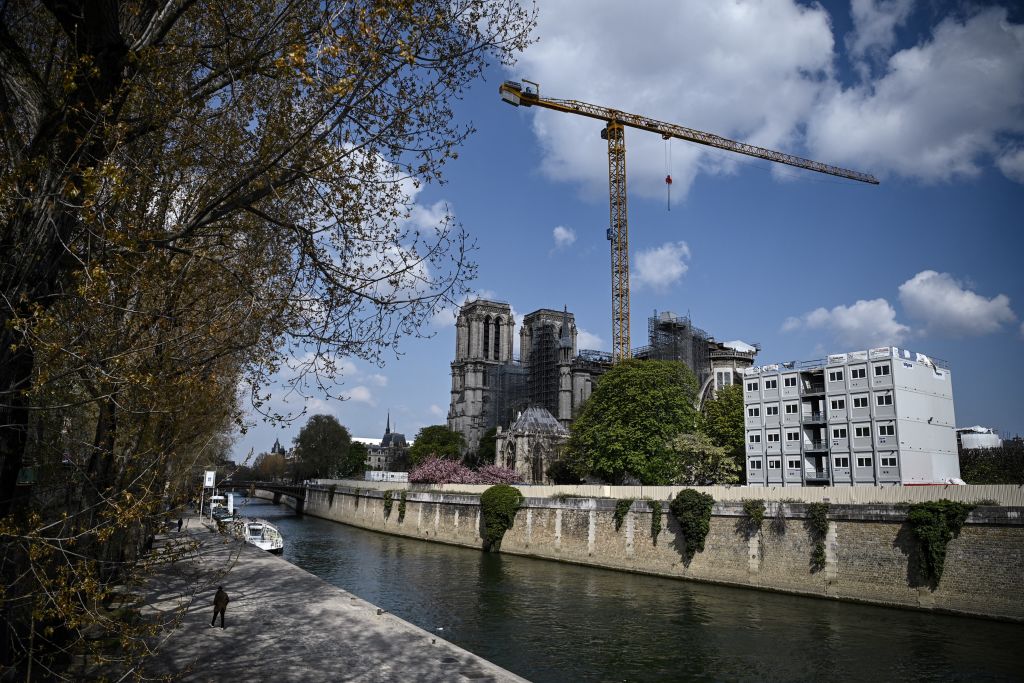 A man walks by the Seine river, near Notre-Dame de Paris cathedral, on April 14, 2021, during the reconstruction work while April 15, 2021 will mark the two years anniversary of the fire that devastated the Cathedral, in the centre of the French capital Paris. (Photo by Anne-Christine POUJOULAT / AFP) (Photo by ANNE-CHRISTINE POUJOULAT/AFP via Getty Images)