The Independent falsely claimed that Kyle Rittenhouse “shot three black men with rifle” after he was cleared of two charges of murder, one charge of attempted murder, and two charges of reckless endangerment in Kenosha, Wisconsin.

The legacy British news outlet, which no longer publishes a print edition but retains an online audience and influence in the UK media and political sphere, led with ‘Full story: Teenager who shot three black men with rifle found not guilty on all charges” as the top subheadline of its front-page coverage of the verdict.

In fact, Rittenhouse’s three assailants — Joseph Rosenbaum, a 36-year-old convicted paedophile who chased Rittenhouse through the streets during a Black Lives Matter riot on August 25th, 2020; Anthony Huber, a 26-year-old with convictions for strangulation and suffocation and domestic abuse who bludgeoned Rittenhouse in the head with a skateboard and appeared to try and grab his rifle; and Gaige Grosskreutz, a 28-year-old with a range of convictions for offences including striking his grandmother, felony burglary, and prowling who himself testified that Rittenhouse did not shoot him until he pointed an unlawfully-carried handgun at him — were all white. 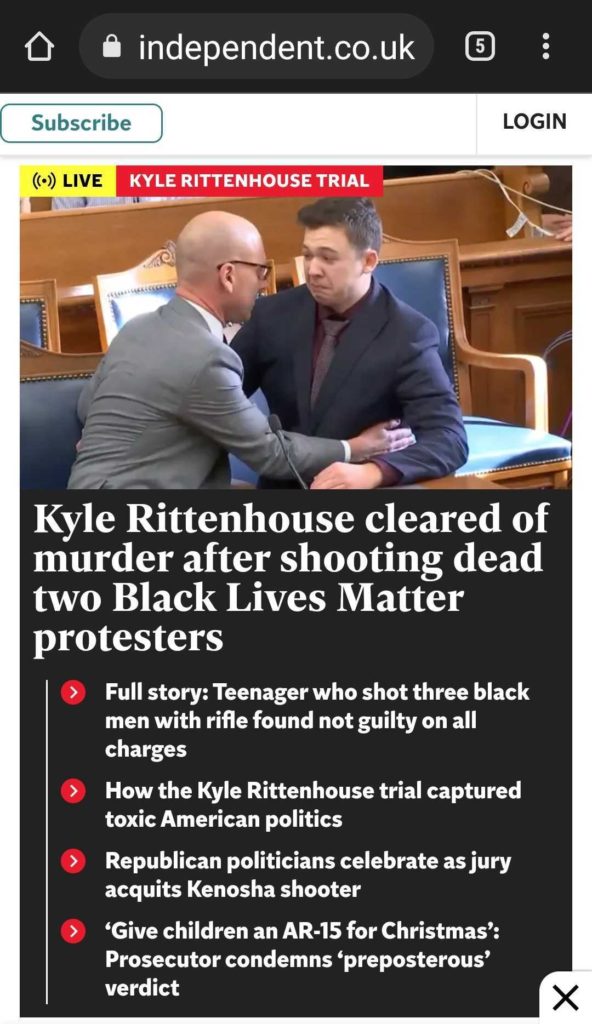 The Independent is not the first high-profile organisation or individual to make erroneous claims about the night Rittenhouse, then aged 17, exercised his right to lawful self-defence, with no less a person than now-President Joe Biden having intimated — without any evidence — that the teenager was a “white supremacist” to a mass audience.

Kyle Rittenhouse’s mother, Wendy, has slammed the 78-year-old Democrat for having “defamed” her son, telling Fox News: “President Biden don’t know my son whatsoever, and he’s not a white supremacist… [Biden] did that for the votes.”

Breitbart London has contacted the Independent to ask if it would be issuing a formal retraction or otherwise commenting on its own claims about Rittenhouse, but received no answer as of the time publication.

Kyle Rittenhouse Collapses as He Is Found Not Guilty pic.twitter.com/jQUxH6jJ3o