Thousands of people marched through central London on Saturday to protest against the impending vaccine mandate for healthcare workers in England.

While Prime Minister Boris Johnson announced the end of most Chinese coronavirus restrictions earlier this week, some measures remain in place, including the April 1st deadline for frontline National Health Service (NHS) and care home staff to be fully vaccinated as a condition of employment.

It is believed that over 80,000 frontline NHS staff remain unvaccinated, representing some six per cent of the entire workforce for the socialised healthcare system.

In a defiant move, hundreds of NHS workers were seen throwing down their uniforms outside Number 10 Downing Street and in Trafalgar Square as they marched alongside ‘World Wide Rally for Freedom’ protesters in the British capital.

Speaking to ITV, one protester, a mental health bank nurse said: “I will lose my job and I am happy for that because I believe in the principles of why we’re all here… informed choice.”

Huge protests in London today. Powerful image of NHS staff throwing down their uniforms. I wonder if we’ll see this on MSM later? pic.twitter.com/jdjnRi0GZW

A midwife at the demonstration told the news outlet: “We’re not going to be bullied or coerced into having something that we don’t want.” 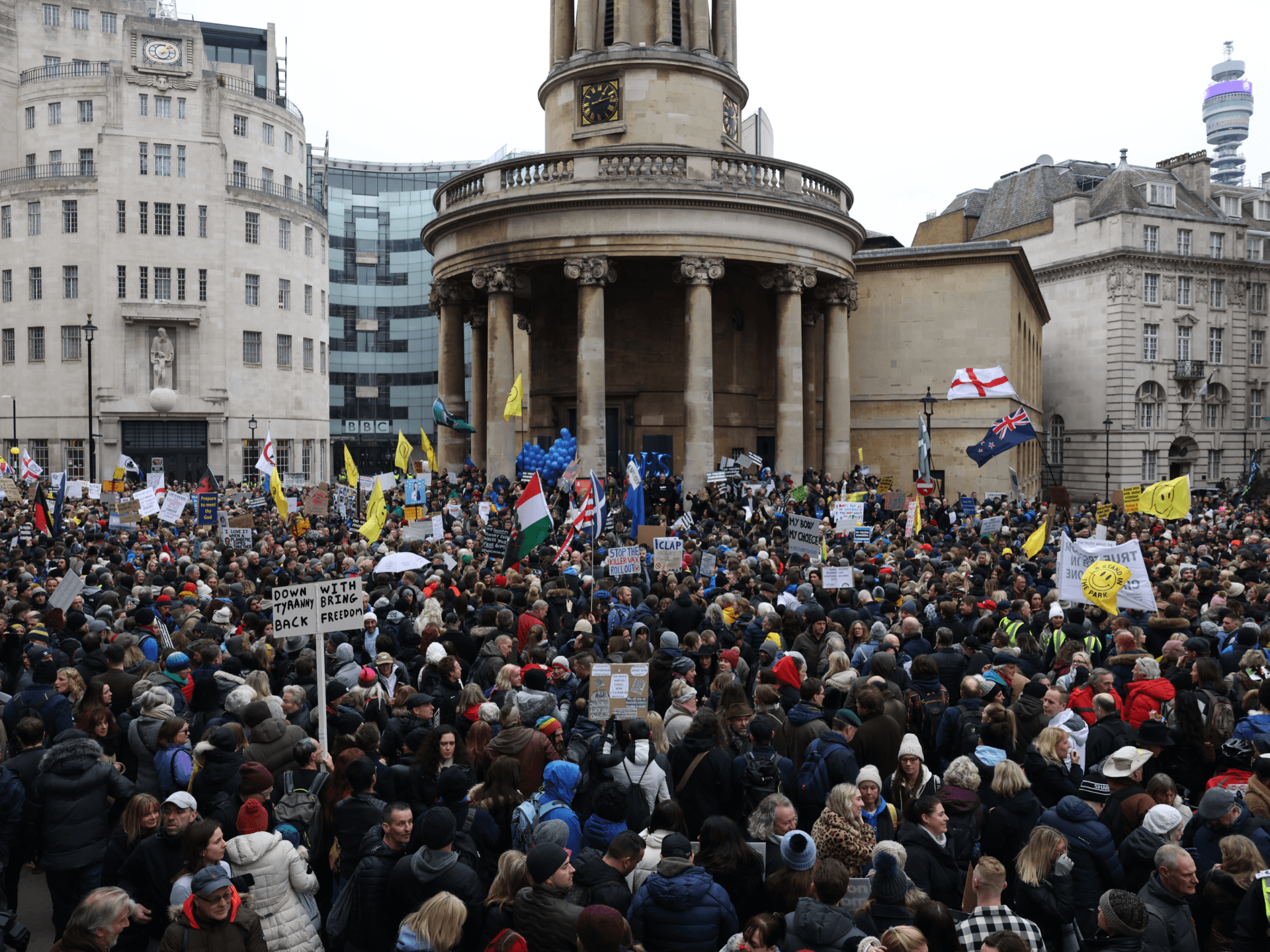 LONDON, ENGLAND – JANUARY 22: Activists take part in the World Wide Rally For Freedom protest outside BBC Broadcasting House on January 22, 2022 in London, England. Despite the government abandoning Plan B restrictions next week protesters are also demanding a stop to covid vaccines for children and vaccine mandates. (Photo by Hollie Adams/Getty Images)

Following the protest, a report in the newspaper considered most closely connected with the Tory government, The Daily Telegraph, claimed that the government is considering pushing back the date of enforcement of the vaccine mandate by six months.

The broadsheet claimed that the move is seen as an attempt to appease Conservative backbenchers who oppose the mandate in general. It is believed by some that if the mandate is pushed down the road, it becomes less likely that it would actually be enforced should the virus continue to wane.

Prime Minister Boris Johnson has been attempting to sure up elements of his party amid a political crisis after numerous leaks revealed his government partied in Downing Street while the rest of the nation was forced to abide by lockdown rules.

Facing a potential challenge to his leadership, on Wednesday, the PM announced the end of mask mandates and coronavirus passports by next week and an end to self-isolation requirements from March.