ROME — The former head of the Vatican’s powerful doctrinal office (CDF), Cardinal Gerhard Müller, said Catholics have an obligation to resist the ideology of the LGBT lobby as something contrary to the dignity of the human person.

In an interview published this week by The Irish Rover following a lecture he gave in late October at the University of Notre Dame, Cardinal Müller was asked about the use of the term “dignity” by the LGBT movement, to which he answered that LGBT ideology is very different from wrestling with one’s sexuality.

“We must absolutely say no to LGBT propaganda, absolute no against LGBT ideology because it’s absolutely wrong,” the cardinal stated. “It is absolutely against our natural, philosophical, and theological anthropology.”

“If one struggles, one is invited to consult God in one’s conscience, to discuss one’s problems with the help of a good advisor and pastor in the church, but not to instrumentalize all forms of sexuality for an ideological program,” he insisted.

“God loves every human being — regardless of sexual orientation,” he noted. “But we know from reason and revelation that God has a plan for how humans should live.” 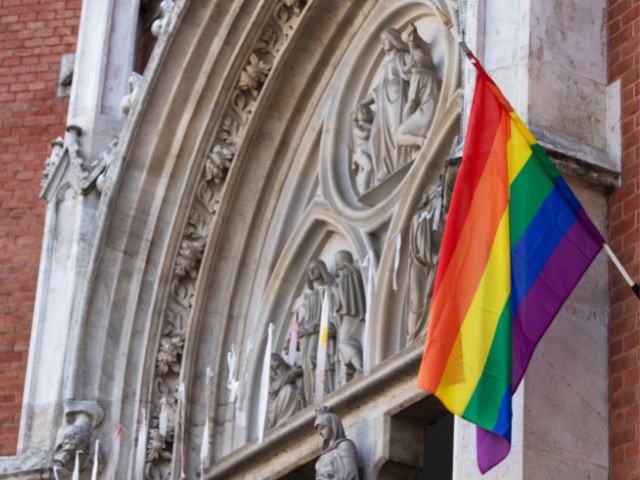 A LGBT rainbow flag hangs outside St Elizabeth Church in Wieden, Vienna, on March 25, 2021. As a protest against the decision of the Vatican Congregation for the Doctrine of the Faith to bless homosexual partnerships, two Viennese churches display the rainbow flag. (ALEX HALADA/AFP via Getty)

The cardinal touched indirectly on the issue of transgenderism, underscoring the importance of the distinction between men and women.

“If you are Catholic, you believe that God has created human beings male and female,” he said. “Moreover, reason tells us that the distinction between the two sexes is the absolute condition for the existence of mankind and consequential generations.”

It is, moreover, important “for children to grow up with parents of both sexes, between the two poles of maternal and paternal orientation,” he added.

Müller went on to note that “not only do people who identify as LGBT wrestle with their sexuality, but also heterosexuals do. They face challenges and need to develop themselves in good spirit.”

It is important to learn to become responsible and let one’s sexuality mature, he said. “I cannot say, ‘I’m a man, I will do what I want.’ The goal is to find a woman and to form a family with her. Or, if not, you may have a priestly vocation or a vocation to a religious order, or a vocation to chaste single life.”

“And we should not forget that matrimony cannot survive without chastity,” he stated. “After all, both partners exclude all other sexual partners, and they learn to live responsibly with their sexuality within marriage.”

Parents should be “educated” on the benefits of LGBT lessons for young children, pollsters say, after 40% disagreed with new teaching policy. https://t.co/nRAu7VQRqb

“They have become one flesh and one mind. That is chastity within marriage,” he said.

“We all must learn faithfulness to another person and to never treat another person as a means for personal, sexual gratification,” Müller concluded. “For us as humans, our highest goal is love of the other person, not using other people for our own desires—that is also true in marriage.”