In a potential post-Roe v. Wade America, a national pro-life leader said her organization is committed to “creative solutions” to protect both mothers and their babies, while the CEO of Planned Parenthood is vowing to use government-eased restrictions on abortion-inducing drugs to ensure women can end the lives of their unborn children at home.

“In a post-Roe America, pro-life leaders in the states and in Congress will forge consensus and work to enact the most ambitious protections yet for unborn children and their mothers – saving millions of lives,” Susan B. Anthony List President Marjorie Dannenfelser said in a statement sent to Breitbart News.

The pro-life leader observed that, “despite the hostility of the Biden administration, life is winning,” and noted a new poll released on the eve of the March for Life that found 71 percent of Americans support legal limits on abortion.

“The pro-life movement’s efforts to build and strengthen the safety net for women and families are more crucial now than ever,” Dannenfelser explained. “We’re committed to finding creative solutions that involve both private sector initiatives, like America’s 2,700 pro-life pregnancy centers, and public sector ones like Texas’ $100-million-per-year state Alternatives to Abortion program that prove we can love and protect both mother and child.”

More Republican-led states have either passed or are considering abortion restrictions that could be enforced should the U.S. Supreme Court’s anticipated ruling in Dobbs v. Jackson Women’s Health Organization return many decisions about abortion back to the states. 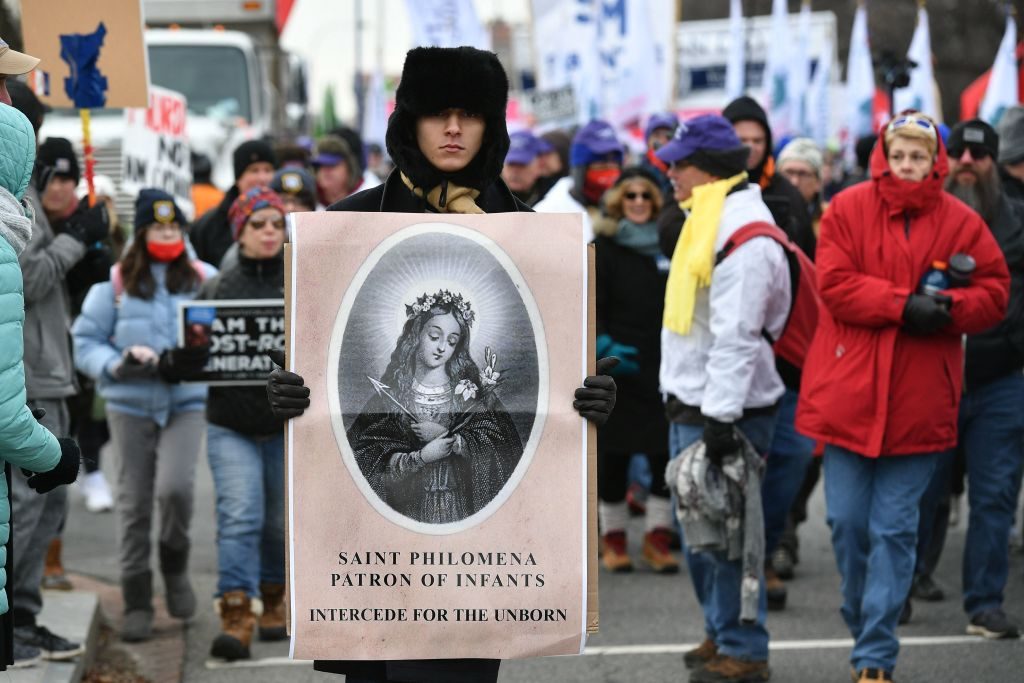 Pro-life activists march during the 49th annual March for Life, on January 21, 2022, in Washington, DC. ( MANDEL NGAN/AFP via Getty Images)

At the same time, the Court has allowed to stand the Texas Heartbeat Act, which bans abortions in the state once a fetal heartbeat can be detected, while lawsuits proceed against it in the Texas Supreme Court.

As pro-life leaders work to prepare to provide support for both mothers and their families, Planned Parenthood CEO Alexis McGill Johnson told MSNBC’s Ayman Mohyeldin over the weekend the abortion industry giant is “exploring all options” to continue to perform abortions.

Aided by the leftist media, the abortion lobby’s narrative is that motherhood prevents women from achieving success and happiness.

On Friday, for example, with the March for Life underway in D.C., Washington Post columnist Monica Hesse wrote pro-life activists “should be ready to help shoulder the burdens they’ve created.”

She continued her tirade against the pro-life community:

I hope you’re ready for your odious brave new world. I presume each and every one of you is planning to adopt several kids. Those chia seed-size embryos that you insist on calling pre-born children eventually will be born to parents who never wanted to be parents, and someone will need to step up to the plate. Since “adoption” has been your solution, you’re up, slugger. Surely you can spare the extra $233,000 that the U.S. Department of Agriculture in 2015 estimated it takes to raise a child from birth to age 18. (If the cost sounds steep, one of your crisis pregnancy centers might be willing to toss in a box of Huggies.)

Johnson told Mohyeldin what the plans are now for the abortion industry:

That means increasing investments in patient navigation. It means exploring all options around telemedicine abortion and more states which were, you know, allowed at the end of this year when, when expanded access, with the lifting of the restrictions around the REMS. It means bolstering supports around our affiliates to ensure that, you know, those who are able, in states that are pushing the boundaries and expanding access and expanding provision, are allowing us to meet the need.

In December, the Biden Food and Drug Administration (FDA) eased restrictions on at-home drug-induced abortions by allowing women and girls to end their pregnancies via mail-order pills, without having to see an abortion provider in person.

Johnson and her organization took advantage of the Chinese coronavirus pandemic by revving up telemedicine drug-induced abortions to replace in-person appointments at abortion facilities.

Johnson, in fact, referred to telemedicine abortion as the “silver lining” of the coronavirus pandemic in April 2020.

“It is actually a silver lining in this pandemic, that Planned Parenthood and many other health providers have actually been able to really lean into telehealth infrastructure and provide service,” she told Democracy Now. 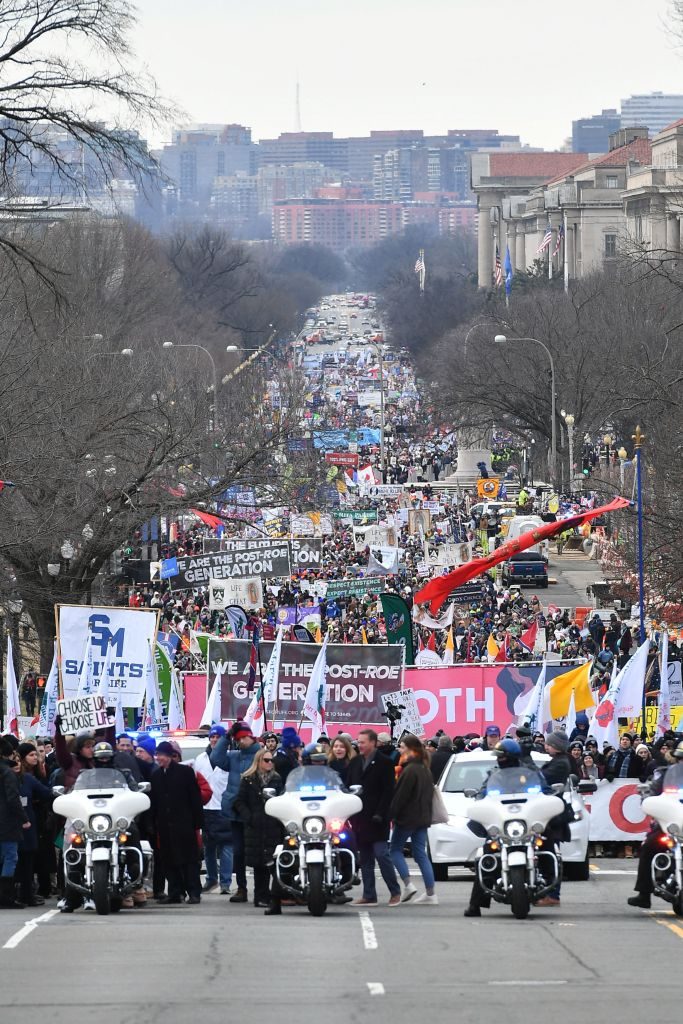 Pro-life activists march during the 49th annual March for Life, on January 21, 2022, in Washington, DC. (MANDEL NGAN/AFP via Getty Images)

That same month, Dr. Meera Shah, chief medical officer of Planned Parenthood Hudson Peconic, touted to the Associated Press (AP) that her organization’s new telemedicine abortion service is so much in demand that one mother began her drug-induced abortion “at home with her children running around behind her.”

Johnson is now looking to Democrat-led states that have expanded abortion access to allow ending the life of an unborn baby even up until the moment of birth.

In Illinois, for example, where Gov. J.B. Pritzker (D) even signed legislation repealing the state’s last pro-life law by allowing minor girls to obtain abortions without their parent’s knowledge, Pritzker touted Friday a new joint effort with Planned Parenthood to create a regional logistics center to provide greater abortion access, including funding, to women traveling to Illinois from other nearby states for abortions.

Pritzker said, according to the Associated Press, he wanted to ensure Illinois becomes “a refuge for reproductive rights.”

“[T]he fact that we know that the people who will be most impacted by the Court decision, and currently by the bans that are being enacted across the country,” Johnson told Mohyeldin, “are the people who will be most marginalized people who are trapped or who are grappling with, you know, low income, who are marginalized because of their, you know, race, their gender identity, a number of things.”

Pushing a narrative of “reproductive justice,” Planned Parenthood continues to market itself to the black community and, now, as the second largest provider of transgender hormones in the United States, to those who claim to be unhappy with their biological sex.

I'm excited to share my 2nd interview with @aliciagarza on the @lady_take podcast! We're talking about the forces of white supremacy that seek to rob us of choice and what we can do to resist. Tune in here: https://t.co/ggtnST7azw. #DoWhatchaLike #LadyLike #AlloftheReal

This is part of America's long-overdue racial reckoning, while we continue to grapple with ongoing violence against Black lives, COVID's disproportionate impact on Black, Indigenous, and Latino communities, and constant barriers to health care due to systemic racism + oppression.

Mohyeldin quickly moved to the Biden and the Democrats’ attempt to allow the federal government to take over elections in the United States. He asked Johnson if her organization would join with Emily’s List and NARAL to end funding the campaigns of Sen. Kyrsten Sinema (D-AZ), who, along with Sen. Joe Manchin (D-WV), refused to join with her colleagues in the Senate to kill the filibuster rule to allow so-called “voting rights” legislation to pass.

I think we have to connect the dots here, right, the same states where we are seeing these egregious restrictions all across the country, particularly in the South, in the Midwest, are also the same states that are enacting the most egregious voting restrictions. And, so, we have to connect the dots here and say that it’s not possible for us to continue to fight for ensuring that we have access in our own states and our own zip codes to get health care that we, that we need, and require, without actually having the same fight for, for democracy.

In a recent op-ed at Newsweek, however, Dannenfelser explained that, should the Supreme Court overturn Roe, much of the debate about abortion will move to the states, where “[p]ro-life advocates must take the initiative in every state.”

In addition to federal legislation to protect the unborn, Dannenfelser wrote:

Pro-life advocates must continue serving mothers and families in need by strengthening the pro-life safety net, which presently includes 2,700 pro-life pregnancy centers nationwide. This also entails making it easier to adopt and foster young children in stable, nurturing homes. The fight for life does not end at birth, and in a post-Roe America, these children and mothers will need our support as urgently as ever.

The pro-life leader sees a post-Roe America as “our greatest opportunity yet to change hearts and minds and save countless lives.”

“Now is the time for all who care about life to prepare for that moment, employing all our creativity and fortitude to restore the right to life to its central place in American law,” she asserted.