TEL AVIV, Israel — Indiana Governor Eric Holcomb joined over 40 ministers of agriculture from around the world on Tuesday at the Agritech Israel conference, a triennial showcase of Israeli innovation in agricultural technology.

Holcomb was not the only American presence at the conference. The State of Iowa commanded two booths, just opposite a pavilion of 20 Israeli startup agricultural companies chosen by organizers to exhibit their innovations.

U.S. states are not just interested in expanding the global profile of their agricultural industries, but also want to bring home the latest in Israeli technology, much of which has developed to meet the challenges of a dry climate.

One company, Supplant, uses sensors to measure plant data and feed them to a computer interface, also available as a smartphone app, that allows farmers to intervene immediately — with additional irrigation, for example.

Other companies exhibiting at the conference specialize in ideas as diverse as seed development, compost management, advanced hydroponic systems, and even the use of drone technology to measure crop conditions in real time. 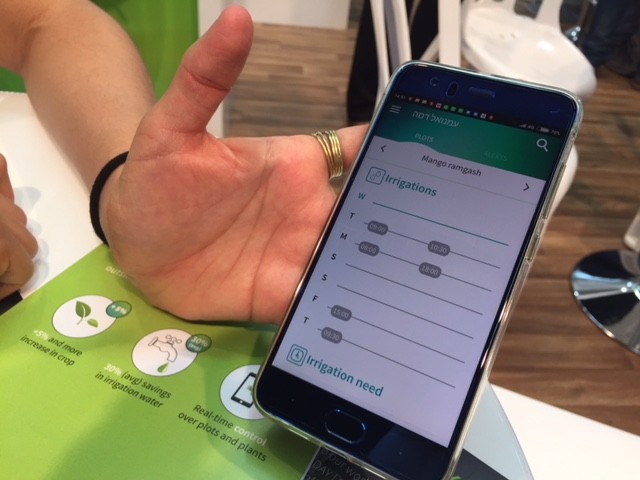 “No other single country – certainly not one as young and as tiny as Israel – has contributed more breakthroughs in [agricultural technology] than Israel,” the conference website boasts. “Since the 1950s, Israelis have not only been finding miraculous ways to green their own desert but have shared their discoveries far and wide… Situated in one of the world’s most arid regions, it was Israel that pioneered and led the concepts of drip irrigation, recycling, purifying and reuse of wastewater for agriculture purposes.”

The conference includes presentations on the latest in Israeli scientific research, plus innumerable pavilions where delegates and company representatives meet and mingle. The hope is to encourage business deals as well as the exchange of ideas — and leading U.S. agricultural states clearly do not want to be left behind.

Joel B. Pollak is Senior Editor-at-Large at Breitbart News. He was named to Forward’s 50 “most influential” Jews in 2017. He is the co-author of How Trump Won: The Inside Story of a Revolution, which is available from Regnery. Follow him on Twitter at @joelpollak.