TEL AVIV — Egypt, France, Germany and Jordan warned Israel on Tuesday against its plan to annex parts of the West Bank, saying that doing so could damage bilateral relations.

“We concur that any annexation of Palestinian territories occupied in 1967 would be a violation of international law and imperil the foundations of the peace process. We would not recognize any changes to the 1967 borders that are not agreed by both parties in the conflict,” top diplomats Sameh Shoukry, Ayman al-Safadi, Jean-Yves Le Drian and Heiko Maas said in a statement issued discussing the matter via videoconference.

“We also concur that such a step would have serious consequences for the security and stability of the region, and would constitute a major obstacle to efforts aimed at achieving a comprehensive and just peace. It could also have consequences for the relationship with Israel,” they added.

“We underline our firm commitment to a negotiated two-state solution based on international law and the relevant U.N. resolutions. We discussed how to re-start a fruitful engagement between the Israeli and the Palestinian side, and offer our support in facilitating a path to negotiations,” the joint statement concluded.

Jordan, Germany and France have been vocal regarding their opposition to the plan, but Tuesday’s statement marked the first public condemnation on the matter by Egypt. 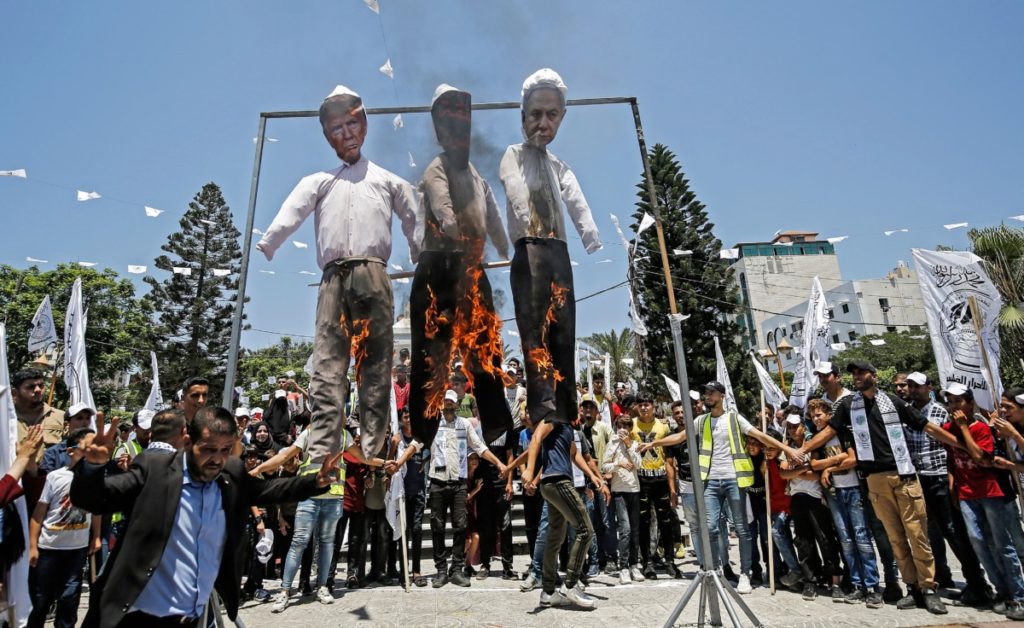 Palestinian supporters of al-Ahrar movement burn effigies depicting (L to R) U.S. President Donald Trump, Trump’s Middle East peace plan dubbed as the “Deal of the Century”, and Israeli Prime Minister Benjamin Netanyahu, during a demonstration against Israel’s plans to annex parts of the West Bank, in Rafah in the southern Gaza Strip on July 7, 2020. (MOHAMMED ABED/AFP via Getty Images)

Jordan’s King Abdullah II has warned of a “massive conflict” if Israel proceeds with plans to apply law to parts of the West Bank, raising concerns that the Hashemite Kingdom may even cancel its peace treaty with the Jewish state.

President Donald Trump’s so-called Vision for Peace sees Israel annexing 30 percent of the West Bank and the Jordan Valley. It also delineates a demilitarized Palestinian state established on most of the West Bank with parts of eastern Jerusalem that are outside the Israeli security fence as its capital.

If Israel goes ahead with the plans, the Palestinian leadership warned it would unilaterally declare a state based on the pre-1967 lines.

Separately, Prime Minister Benjamin Netanyahu spoke with the UK’s Boris Johnson and stressed Israel’s readiness to “conduct negotiations on the basis of President Trump’s peace plan, which is both creative and realistic, and will not return to the failed formulas of the past,” according to a statement provided by Netanyahu’s office on Tuesday.