Florida Governor Ron DeSantis has issued a 90-day ultimatum to Unilever, the parent company of Ben & Jerry’s ice cream, demanding that it reverse a boycott of Israel or else face the penalty of divestment by state-controlled funds.

Ben & Jerry’s stirred controversy and outrage last month when the company announced that it would no longer allow its products to be sold in “Occupied Palestinian Territory.” It is not clear what that territory is; Palestinians who reject Israel’s right to exist consider all of Israel to be “occupied,” and the Obama administration notoriously allowed the UN Security Council to declare eastern Jerusalem, including the ancient Jewish Quarter, to be illegally occupied territory. 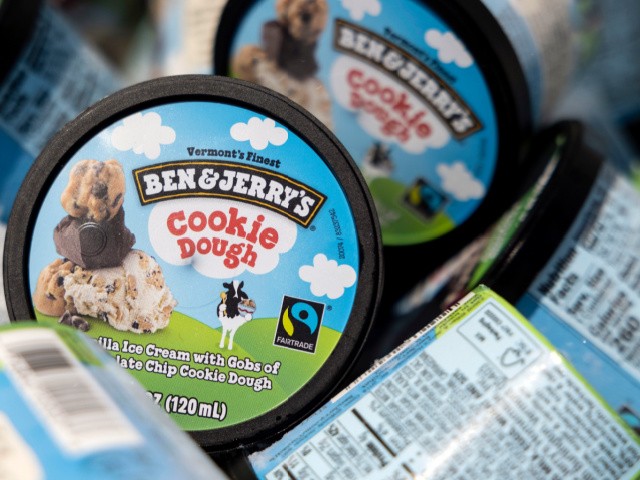 WASHINGTON, DC – MAY 20: Ben and Jerry’s ice cream is stored in a cooler at an event where founders Jerry Greenfield and Ben Cohen gave away ice cream to bring attention to police reform at the U.S. Supreme Court on May 20, 2021 in Washington, DC. The two are urging the ending of police qualified immunity. (Photo by Kevin Dietsch/Getty Images)

On Tuesday, he took the next step, the Algemeiner noted:

Governor Ron DeSantis’ office announced Tuesday that the Executive Director & Chief Investment Officer of the Florida State Board of Administration (SBA), Ash Williams, had informed the governor that Unilever has been added to Florida’s List of Scrutinized Companies that Boycott Israel.

Under Florida law, if a listed company does not cease boycotting Israel within 90 days, it will face an investment prohibition and the state of Florida will no longer contract with the company or any of its subsidiaries.

Florida’s SBA was in contact with Unilever’s investor relations team before the decision to list the company, and was told Unilever would take no action against Ben & Jerry’s boycott.

Governor DeSantis stated, “As a matter of law and principle, the State of Florida will not tolerate discrimination against the State of Israel or the Israeli people.”

Other counter-boycotts have been private, with many grocery store chains in New York and Florida — two states with large Jewish populations — refusing to stock Ben & Jerry’s products in response to the boycott. The “woke” company still does business in countries that have tyrannical governments that routinely violate human rights, such as China.

Joel B. Pollak is Senior Editor-at-Large at Breitbart News and the host of Breitbart News Sunday on Sirius XM Patriot on Sunday evenings from 7 p.m. to 10 p.m. ET (4 p.m. to 7 p.m. PT). He is the author of the recent e-book, Neither Free nor Fair: The 2020 U.S. Presidential Election. His recent book, RED NOVEMBER, tells the story of the 2020 Democratic presidential primary from a conservative perspective. He is a winner of the 2018 Robert Novak Journalism Alumni Fellowship. Follow him on Twitter at @joelpollak.