Israeli Defense Minister Benny Gantz has come under fire from his coalition partners for hosting Palestinian Authority President Mahmoud Abbas at his home in on Tuesday night, marking the first time the Palestinian leader has held talks with a senior Israeli official in Israel in over a decade.

According to Gantz, the meeting discussed cooperation on the security front and preventing terrorism and violence.

Gantz also told Abbas that he wished to continue promoting cooperation on economic and civil matters.

The two previously met in Ramallah over the summer.

This evening I met with PA President, Mahmoud Abbas. We discussed the implementation of economic and civilian measures, and emphasized the importance of deepening security coordination and preventing terror and violence – for the well-being of both Israelis and Palestinians.

The two-and-a-half hour meeting was also attended by Israel’s military liaison to the Palestinians Ghassan Alian, Palestinian Authority intelligence chief Majed Faraj, and Abbas adviser Hussein al-Sheikh who said the two discussed a “political horizon leading to a political solution,” as well as the recent spike in violence by Israeli settlers in the West Bank. Recent weeks have also seen a sharp increase in terror attacks by Palestinians.

Kan news reported that Abbas pledged that as long as he was in power, he wouldn’t permit the use of violence or terror against Israelis. 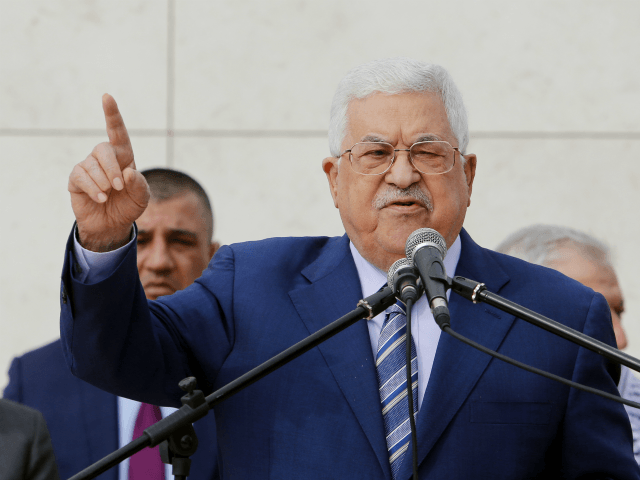 Palestinian President Mahmoud Abbas speaks after laying a wreath at the tomb of late Palestinian leader Yasser Arafat on the 14th anniversary of his death, Sunday, Nov. 11, 2018. (AP Photo/Nasser Shiyoukhi)

According to Israeli media reports, Abbas and Gantz exchanged gifts. At one stage during the meeting, Gantz’s son, an Israeli soldier, and Abbas commented: “I hope peace comes out of this house.”

Israeli Prime Minister Naftali Bennett was said to have criticized Gantz for holding the meeting, in particular in his home.

Gantz’s coalition party, Housing Minister Ze’ev Elkin of the right-wing New Hope, slammed Gantz for hosting Abbas, who has pledged to pay salaries for terrorists and their families under the PA’s so-called “pay-for-slay” scheme — a policy the aging Palestinian leader has said was “noble.”

Elkin also noted that Abbas has pushed for senior Israeli security officials, including Gantz himself, to face prosecution by the International Criminal Court for war crimes.

MK Yoaz Hendel, also of New Hope, said that despite ongoing security ties with the PA, he would have never agreed to meet with Abbas, whom he described as a “Holocaust denier [who] is playing a very strange double game.”

As the Times of Israel notes,  Abbas’ history of Holocaust denial dates back to his 1980s doctoral dissertation – in which he refuted the six million figure and claimed that Zionist leaders cooperated with the Nazis – until as recently as 2018, when he said that the Holocaust was caused not by antisemitism, but by the “anti-social behavior” of the Jews, such as money-lending.

The opposition, led by former prime minister Benjamin Netanyahu, slammed the meeting, warning that “it’s only a matter of time until there are dangerous concessions to the Palestinians.”

Following the meeting, the Defense Ministry announced several “confidence-building” steps, including the transfer of $32.2 million in tax payments and several thousand resident permits for the PA as well as entry permits into Israel.