Former British Army Col. Ash Alexander-Cooper, who served as an adviser to the Afghan Ministry of Interior Affairs, reported on Tuesday that an Afghan sniper who worked with British special forces was hunted down by the Taliban and brutally executed in front of his family in Kabul.

Alexander-Cooper told the Times of London the slain sniper was a 28-year-old father of five who had been hiding in Kabul since the Taliban takeover. The victim, identified only as “N” to protect his family from further brutality, belonged to an elite Afghan military unit that was “very effective and mentored by the British.”

Alexander-Cooper said the victim was “shot multiple times, executed in front of his family” when the Taliban found him. He noted all of N’s children are under 9 years of age, and the youngest is a ten-day-old baby.

“For those leaders still unsure, this is not a game, ‘N’ was executed by the Taliban in cold blood just a few hours ago. His crime? Years of loyal and professional service, mentored by British units,” he said on Twitter:

For those leaders still unsure, this is not a game. ‘N’ was a executed by the Taliban in cold blood just a few hours ago. His crime? Years of loyal & professional service, mentored by British units. There is no ‘amnesty’. Abandoned by us, this murder will not be the last. 1/ pic.twitter.com/tP4uxWtY6x

“There is no amnesty. Abandoned by us, this murder will not be the last,” Alexander-Cooper warned.

“This is the reality of the ‘new’ Taliban. Talk of inclusivity, diversity and amnesty is a joke and some are falling for it. Wake up,” he said.

A second source, a former Afghan interpreter named Rafi Hottak now living in the United Kingdom, confirmed the details about “N” and said he was a member of an Afghan special forces unit designated CF333.

Hottak said “N” was on his list of “700 Afghans who wanted to come to Britain but had been left behind.”

The Times of London additionally reported a former interpreter who worked with British forces, a 25-year-old father of four named Sharif Karimi, was kidnapped and beaten by Taliban fighters when he tried to reach the Kabul airport for an evacuation flight. Karimi was released after local elders helped his family pay a $21,500 ransom. 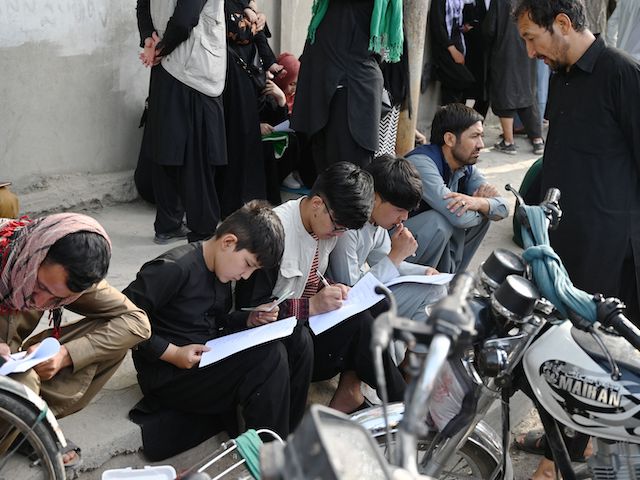 Afghan people fill up their details on a sheet of paper to register their name in order to leave the country in front of the British and Canadian embassy in Kabul on August 19, 2021, after the Taliban’s military takeover of Afghanistan. (Wakil Kohsar/AFP via Getty Images)

The UK Daily Mail on Monday reported a “former frontline interpreter with UK troops” named Mohammad Khan was able to escape from Afghanistan by crossing into Pakistan with his wife and three children, aided by Japanese officials instead of the British government.

“Mohammad said Japanese officials – he had worked with Tokyo-backed aid programs – helped orchestrate his escape and, unlike the British, had been in regular contact with him,” the Daily Mail wrote.

The Taliban constantly promises it will not engage in “reprisal killings” to keep international aid flowing, and tells Afghans who worked with Western governments they have no reason to flee the country, even as accounts of vicious retaliatory assaults, kidnappings, and murders pile up.

On Monday, a group of Western-trained Afghan pilots who fled to Afghanistan began relocating to the United Arab Emirates, evidently unconvinced by Taliban promises they would be welcomed if they returned home and have no reason to fear retaliation.