The Algerian government announced Wednesday that its airspace will no longer be open to civilian or military aircraft from Morocco, the latest development in a growing dispute between the neighboring nations.

Algeria’s High Security Council said the ban on all aircraft with a Moroccan registry number was imposed “in view of the continued provocations and hostile practices on the Moroccan side.”

Reuters reported no immediate official response from Morocco, but an unnamed source at the state-owned national airline, Royal Air Maroc, breezily dismissed the Algerian action as “insignificant” because only 15 flights a week would be affected, and those flights could avoid Moroccan airspace without much trouble by flying over the Mediterranean.

In addition to closing Algeria’s airspace, the High Security Council said it would intensify security along the border with Morocco, which has been closed in both directions for almost 30 years.

The long-simmering feud between Algeria and Morocco erupted in August, when Algeria accused Morocco of assisting a “criminal network, classed as a terrorist organization” in starting deadly forest fires in northern Algeria. 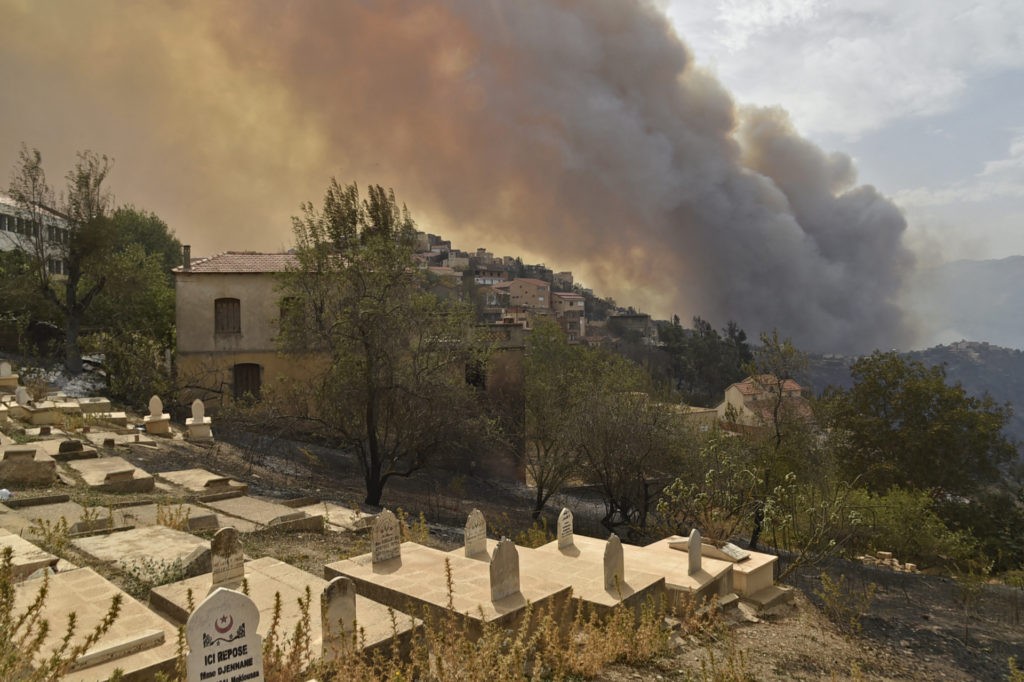 Smoke billows from a wildfire in the forested hills of the Kabylie region, east of the capital Algiers, on August 10, 2021. – Wildfires fanned by blistering temperatures and tinder-dry conditions have killed at least seven people in Algeria, the interior minister said, adding the fires had criminal origins. (Photo by Ryad KRAMDI / AFP) (Photo by RYAD KRAMDI/AFP via Getty Images)

The network in question was a separatist group called the Movement for Self-determination of Kabylie (MAK), a name that refers to the Mediterranean coastal region that desires autonomy from the Algerian government. The MAK believes ethnically-distinct Kabylie should never have been incorporated into Algeria when it won independence from France in 1962.

Numerous human rights groups have criticized the Algerian government for discriminating against the people of Kabylie, who refer to themselves as Kabyles or Amazigh, a much older name for the non-Arabic people of the region. The common Western term for them is “Berbers,” a name derived from the Greek term for “barbarians.”

Algeria was enraged in July when the Moroccan representative to the United Nations expressed support for the “Kabyle people’s right to self-determination,” denouncing the Moroccan statement as “reckless, irresponsible, and manipulative.”

Algeria unsuccessfully demanded Morocco apologize and retract its statement. When none was forthcoming, Algeria cited the “incessant hostile acts carried out by Morocco” to suspend diplomatic relations on August 24.

Among those “hostile acts” was Morocco’s rapprochement with Israel, which Algeria accused of supporting the MAK and supplying Morocco with cyberweapons to use against Algeria.

Morocco dismissed Algeria’s accusations as “fallacious and even absurd,” and said in August it regretted the “completely unjustified” decision by Algiers to break off diplomatic relations. France, the former colonial power in both nations, implausibly described them as “two friends and two essential partners,” while other Western and Middle Eastern powers worried their feud could jeopardize counterterrorism efforts in the region.

Morocco has a grievance against Algeria that mirrors the MAK controversy: Algeria supports a Western Saharan independence movement called the Polisario Front that seeks autonomy for an area Morocco annexed in 1975.

On Tuesday, Morocco accused Algeria of allying with the Lebanese terrorist organization and political party Hezbollah to support the Polisario Front.

Morocco severed diplomatic relations with Hezbollah’s patron Iran in 2018, accusing the Iranians of using Hezbollah to funnel weapons to the Saharan separatists. The new allegation was that Hezbollah instructors are training Polisario terrorists at a refugee camp near the Algerian town of Tindouf.

The Algerian Ministry of Foreign Affairs denounced Morocco’s allegations as “lies” and “gross manipulation” of the international community, intended to distract from Morocco’s “human rights violations.”