The House on Thursday made special visas, reserved for Afghans who can get refuge in the U.S. for aiding the American war effort, available to non-governmental organizations (NGOs) and other groups.

The visa eligibility expansion that will increase the pool of potential applicants was added to a bill as an amendment introduced by Democrat leaders at the last minute, Rep. Chip Roy (R-TX) revealed during a speech on the House floor before voting no.

“We have got to restore regular order in this body,” Congressman Roy declared in response to the Democrat leaders’ move to amend the bill without allowing lawmakers to debate the changes.

“We didn’t have a hearing on this specific manager’s amendment … It was just added, put on the floor, and put under the title of something that everyone supports,” he added

The legislation, introduced by Rep. Jason Crow (D-CO) with 24 bipartisan members of Congress, passed overwhelmingly in a 407-16 vote, with 192 Republicans voting in favor. All “no” votes came from Republicans. The bill will now go to the Senate. 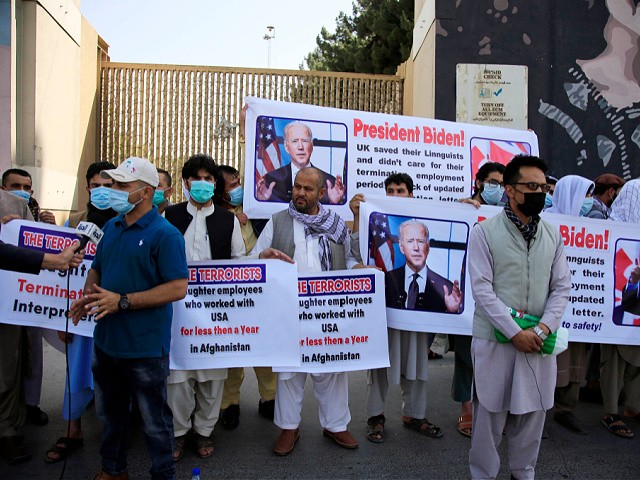 Former Afghan interpreters hold placards during a demonstrations against the US government, in front of the US Embassy in Kabul, Afghanistan, Friday, June 25, 2021. (AP Photo/Mariam Zuhaib)

“We should be standing with Afghanis who stood with our men and women in uniform. There is zero question that we should do that, and every veteran that I represent in the district in Texas 21 shares that,” Congressman Roy said on the House floor.

He went on to say the last-minute amendment prevented him from voting in favor of the bill.

The bill also expands eligibility for SIVs to family members of killed applicants.

It also authorizes 8,000 additional SIVs even though the existing reserve of available visas, estimated at 10,000 as of early this year, is far from exhausted given the slow visa process that has required some Afghans to wait for years.

The Biden administration is also considering granting 2,000 additional visas to women vulnerable to reprisals from the Taliban after the U.S. military leaves.

Early this month, President Joe Biden told reporters his administration had identified American facilities outside the continental United States and in third countries to host about 4,000 Afghans with pending SIV applications and their family members who chose to evacuate.

At the time, he did not explicitly say where the Afghans would go, saying that his administration would begin evacuation flights this month.

According to the State Department, the Afghans eligible for evacuation must make their own way to the capital of Kabul, given the limited U.S. presence. 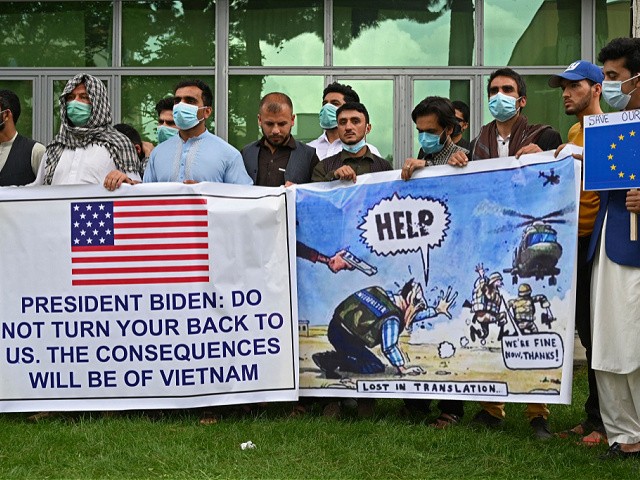 Afghan former interpreters for the US and NATO forces gather during a demonstration in downtown Kabul on April 30, 2021, on the eve of the beginning of Washington’s formal troop withdrawal — although forces have been drawn down for months. (Photo by WAKIL KOHSAR/AFP via Getty Images)

This week, President Biden went back on his word of keeping the Afghans evacuees outside the continental United States.

An unnamed senior State Department official revealed that Afghans who have completed most of their SIV process would be evacuated to a U.S. Army garrison in Virginia, adding that the Afghans and their families would remain at Fort Lee for approximately seven to ten days.

Some officials have expressed concerns that if Afghans with pending visa applications end up in U.S. territory, it would be impossible to deport them if the United States denies their SIV applications.

Tajikistan, which has already received Afghan civilians and security forces fleeing an aggressive offensive launched by the Taliban as the U.S.-led NATO forces withdraw, announced it is ready to take 100,000 Afghan refugees.

The Biden administration had been lobbying Afghanistan’s Central Asian neighbors — Tajikistan, Kazakhstan, and Uzbekistan — to take 9,000 Afghans waiting for SIVs.

Tajikistan is the first one to agree to help. The Biden administration has reduced the applicant backlog from 18,000 to 10,000. That number reportedly excludes tens of thousands of family members.