Restaurants, stadiums, and stores across the nation are reserving areas to honor the 13 U.S. troops who were killed in Afghanistan last week after suicide bombers in Kabul blew up at least 170 people.

Thad Doumar, owner of Doumar’s Cones and Barbecue in Norfolk, Virginia, told Breitbart News the display in his restaurant is “just a tiny gesture” of gratitude.

“We are a military town here, so we hold the military close here. They’re very important to us,” Doumar explained. Norfolk is home to the world’s largest naval base.

To honor the 13 U.S. service personnel who gave their lives at the bombing at Kabul airport, we have set up a reserved booth. #usa🇺🇸 #somegaveall #honoringthefallen

Posted by Doumar's Cones and Barbecue on Wednesday, September 1, 2021

Doumar said he wants people who pass by the table to “take a moment of reflection to think about the 13 people’s families, and all the lives that are affected by their absence.”

While he doesn’t think the situation in Afghanistan “was well handled,” Doumar said he’s not political. His father served in the military and he praised our service personnel: “They are a great part of the reason as to why we exist and why we succeed.”

In Panama City Beach, Florida, Back Beach Barbecue set a table aside to honor the fallen, complete with beers, patriotic bunting, and a list with the names of the fallen. Manager Heather Parker created the display earlier this week and plans on keeping it up through the weekend.

“We respect our military all the time” at Back Beach Barbecue, Parker told Breitbart News.  The restaurant also has daily discounts for service personnel.

Five of the Marines who died were too young to drink, but the display is about honoring the fallen and showing respect, Parker said.

Nee Nee’s Italian Steakhouse in Warsaw, Missouri, shared a photo with beers at a table to remember the fallen, using the hashtag “AfghanistanDiaster”:

We bought a round to honor our fallen soldiers….thank you for your sacrifice. #AfghanistanDisaster # # pic.twitter.com/mtmfV1GDxj

One Blackbear Diner chain location in Fernley, Nevada, reserved a table and posted a photo online with the caption, “We didn’t know them all, but we owe them all”:

In honor of those who gave all
"We didn't know them all, but we owe them all" A tribute to the 13 fallen heroes in Afghanistan. 🇺🇸 Black Bear Diner Fernley Nevada pic.twitter.com/8iR8kpwEeJ

Brother’s Bar and Grill in Indianapolis, Indiana, posted a photo of their tribute as well:

Today we will reserve this table for our 13 fallen soldiers. We will honor their ultimate sacrifice 🙏🇺🇲

"We don't know them all, but we owe them all." pic.twitter.com/ZPBdeAgrmz

Heritage Distilling, which has tasting rooms across Washington and Oregon, reserved tables at each of their locations this week:

We honor those that protect our freedom. This week, we reserve a table for our 13 fallen soldiers at each of our HDC Tasting Rooms. #13Fallen pic.twitter.com/mqO7CcsZQu

Last week, Breitbart News covered a New York brewery that set out 13 beers to honor the fallen. They also planned to donate money “on behalf of the fallen service members.”

Students remembered the heroes as well, including student council and National Honor Society members at Lampasas High School in Texas:

We saved space for 13 fallen soldiers today. NHS & StuCo put together a memorial on the stage in the cafeteria which will stay up through Friday so students and staff can honor them. @LampasasHS @LampasasISD #whatadistrict pic.twitter.com/TvMvRbORvx

Softball players at Saltillo High School in Mississippi did a workout “as a small thank you to all that paid the ultimate price.”:

Softball completed a workout to honor our fallen soldiers as a small thank you to all that paid the ultimate price. Proud of our girls and thankful for the soldiers that sacrifice so much for us to live free 🇺🇸 #LTP #13 pic.twitter.com/NnS8fwr20T

The Baker Hotel and Spa in Mineral Wells, Texas, lit up with green to honor “all of our soldiers who have made the ultimate sacrifice for our country.”:

The Baker Tower is glowing green to honor those fallen in Afghanistan and all of our soldiers who have made the ultimate sacrifice for our country. pic.twitter.com/4vQH59TxAS

Stadiums across the country also are recognizing the troops by reserving 13 seats, including the minor league baseball team Altoona Curve in Altoona, Pennsylvania:

These 13 seats are reserved at today’s game for the 13 fallen heroes who lost their lives in Kabul. pic.twitter.com/lfvcwMMZI7

The Myrtle Beach Pelicans, a minor league baseball team in Myrtle Beach, South Carolina, plans to reserve 13 seats for the remainder of their season:

For the remainder of the season, these 13 seats will be left vacated in honor of the 13 fallen US service members who made the ultimate sacrifice while serving our country. pic.twitter.com/cH0ydsqo86

In Seattle, 13 flags were laid across the seats of the Seattle Mariners and Houston Astros game. 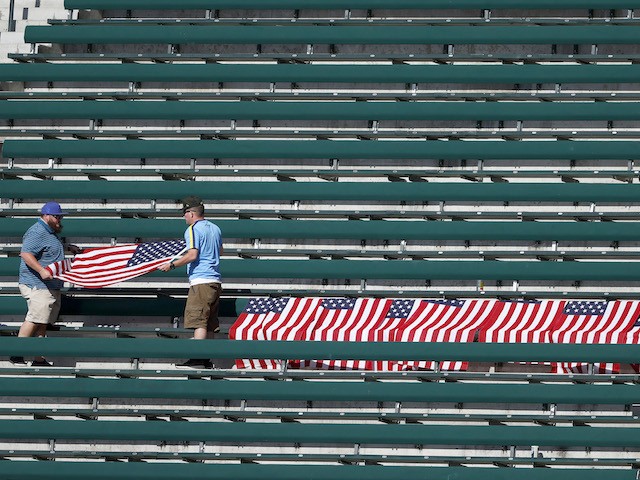 Fans fold flags to honor 13 US service members killed in Kabul airport attack after the game between the Seattle Mariners and the Houston Astros at T-Mobile Park on September 01, 2021, in Seattle, Washington. (Steph Chambers/Getty Images)

Stores have also dedicated tables and aisles to the 13 heroes who gave their lives for our country last week, including Lowes in Virginia and Michigan as well as a Home Depot in Bowling Green, Ohio:

In honor of the 13 fallen soldiers we have decorated our Aisle 13. God bless their families! pic.twitter.com/lIEKwoVtbC

In Stafford, Virginia we honor the fallen 13 soldiers. #1909squad pic.twitter.com/0GLPx8MgVR

I'm blessed to be surrounded by the best team of people. My team took it upon themselves to honor the fallen 13 by placing 13 flags down aisle 13. Who you work with makes all the difference. @BGHomeDepot3864 @DorthanalL @DebraBakerHD @THDJohnG @chris73nb pic.twitter.com/nqKaGL1jPx

Previously, the largest single-day loss of U.S. soldiers in Afghanistan occurred in 2011, when Joe Biden was Vice President.

President Biden was criticized earlier this week after video emerged of him apparently checking his watch during the dignified transfer ceremony of the Marines’ remains in Dover, Deleware.