A failed United States military drone strike that killed as many as 10 Afghan civilians, including seven children, is casting doubt over President Joe Biden’s “over the horizon” plan to keep terrorists at bay in Afghanistan.

The Pentagon is trying to take steps to find out exactly what went wrong, ordering a 45-day investigation to begin on Tuesday. 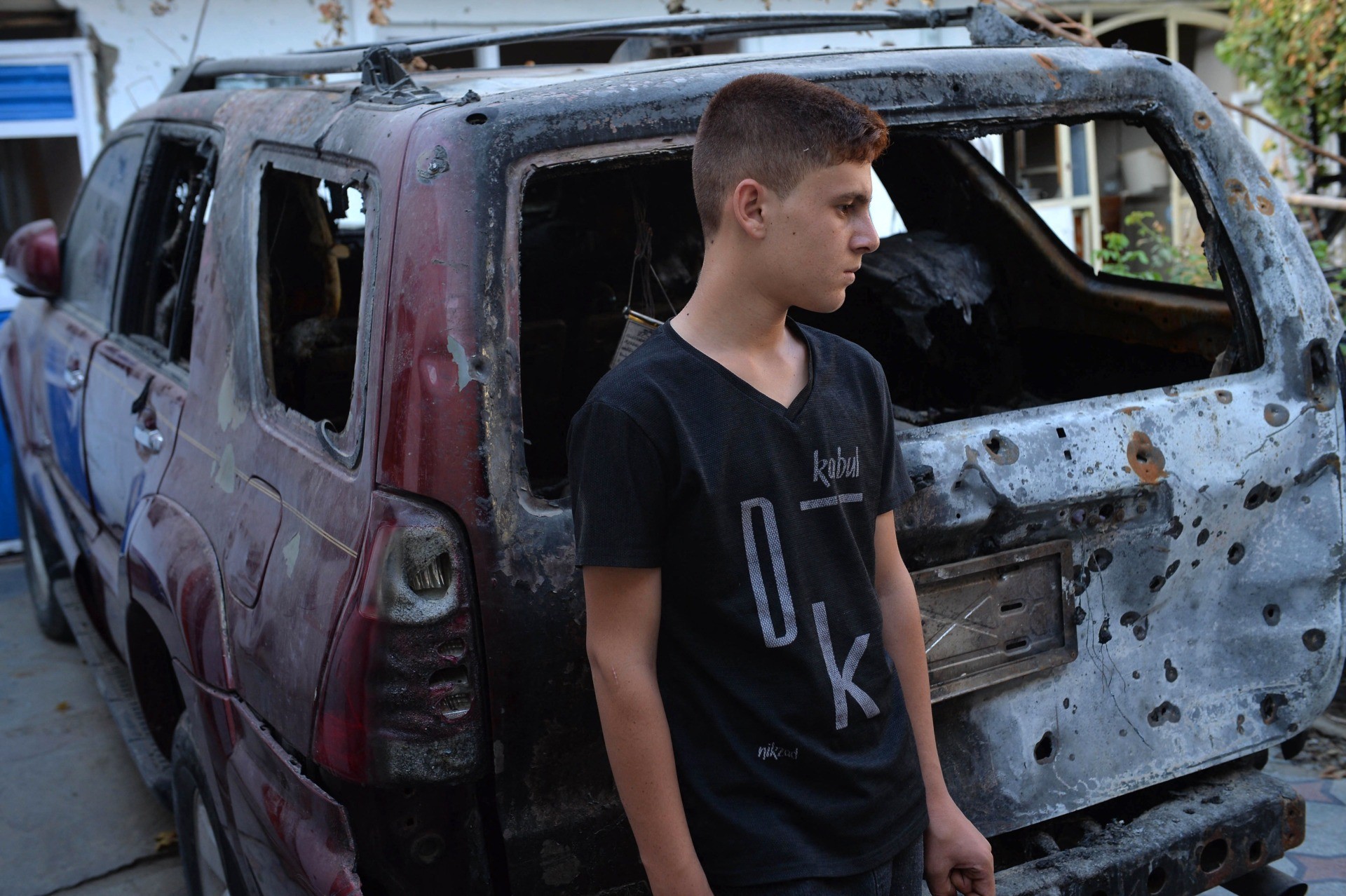 A relative of Ezmarai Ahmadi, stands next to a vehicle that was damaged in a US drone strike in the Kwaja Burga neighbourhood of Kabul on September 18, 2021. – Ezmarai Ahmadi was wrongly identified as an Islamic State militant by US intelligence, who tracked his white Toyota for eight hours on August 29 before targeting the car, killing seven children and three adults. (HOSHANG HASHIMI/AFP via Getty Images).

However, questions have already risen over whether the U.S. military can continue to mount an effective plan to prevent al Qaeda, Islamic State, and other terrorist groups in Afghanistan from regaining a foothold from which to launch attacks against the U.S. 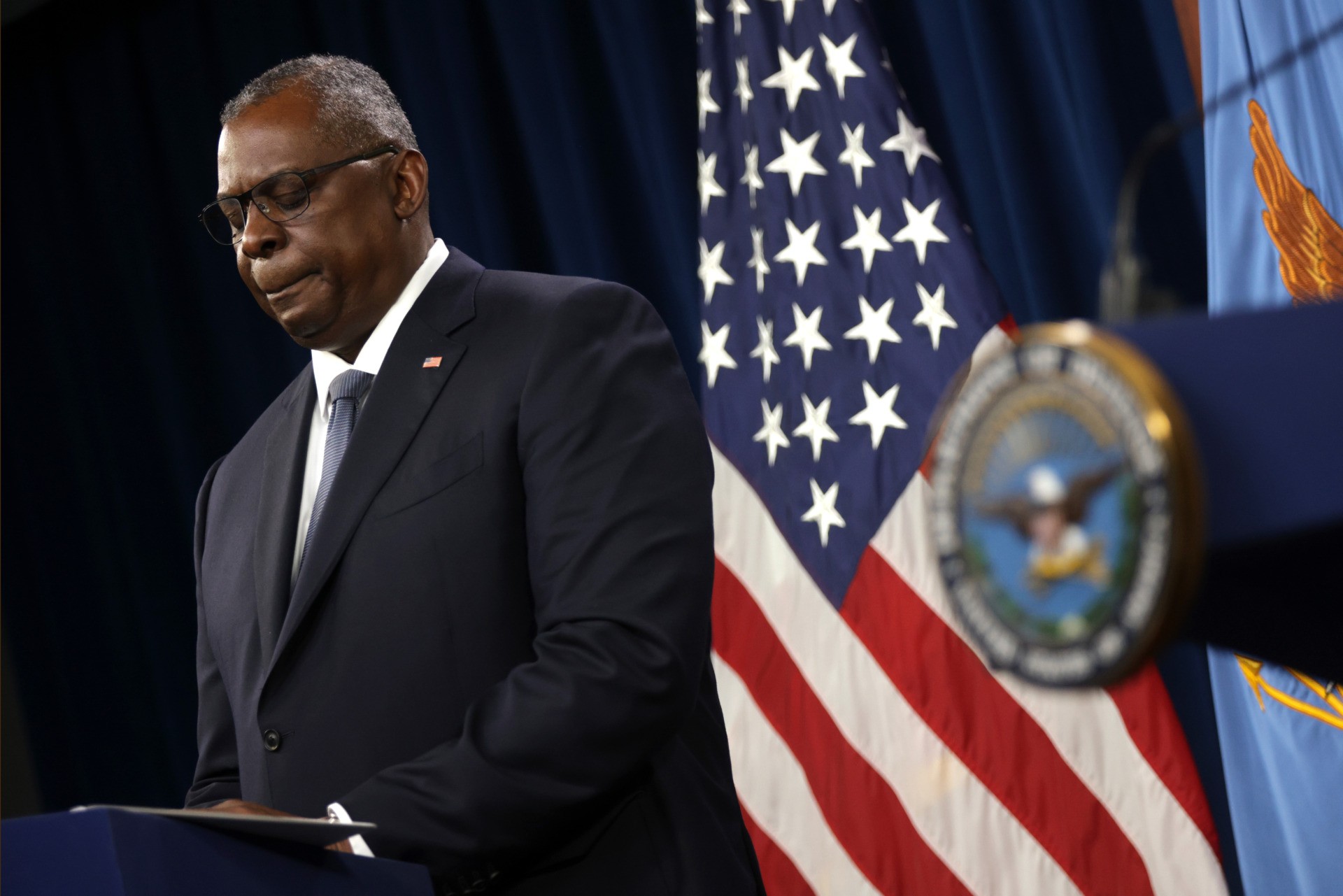 White House Press Secretary Jen Psaki on Monday tried to say there was a difference between the August 29 drone strike that killed Afghan civilians and the president’s “over the horizon” plan to strike terrorists using military assets from outside of Afghanistan.

Psaki said, “You know there’s a difference between a self-defense strike based on an imminent threat to U.S. forces [who] were obviously on the ground, and these were threats [and] an over-the-horizon strike, where we typically expect to have more time to assess both the threat and the potential target,” she told reporters during a briefing. 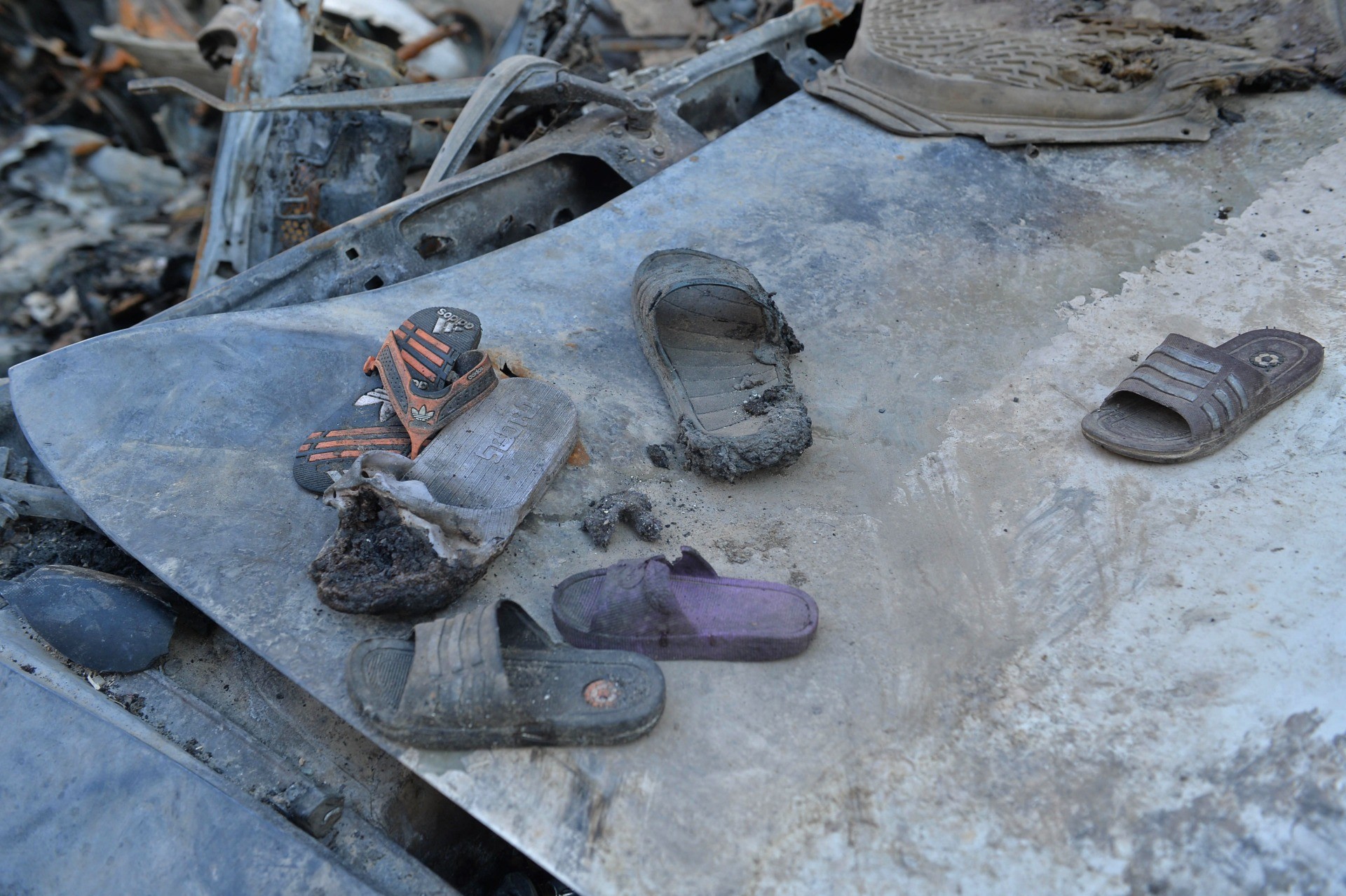 Partially burnt footwears are pictured amid the debris of the house of Ezmarai Ahmadi that was damaged in a US drone strike. (HOSHANG HASHIMI/AFP via Getty Images).

However, Chairman of the Joint Chiefs of Staff Army Gen. Mark Milley told reporters at a briefing on September 1 that the process was the same as in the past for drone strikes and that nothing was rushed.

A reporter asked him, “Because of the urgent threat environment at the time, did preliminary assessments indicate that we may have rushed, relaxed or waived altogether some of the normal checks and balances that we do before a strike like that?” 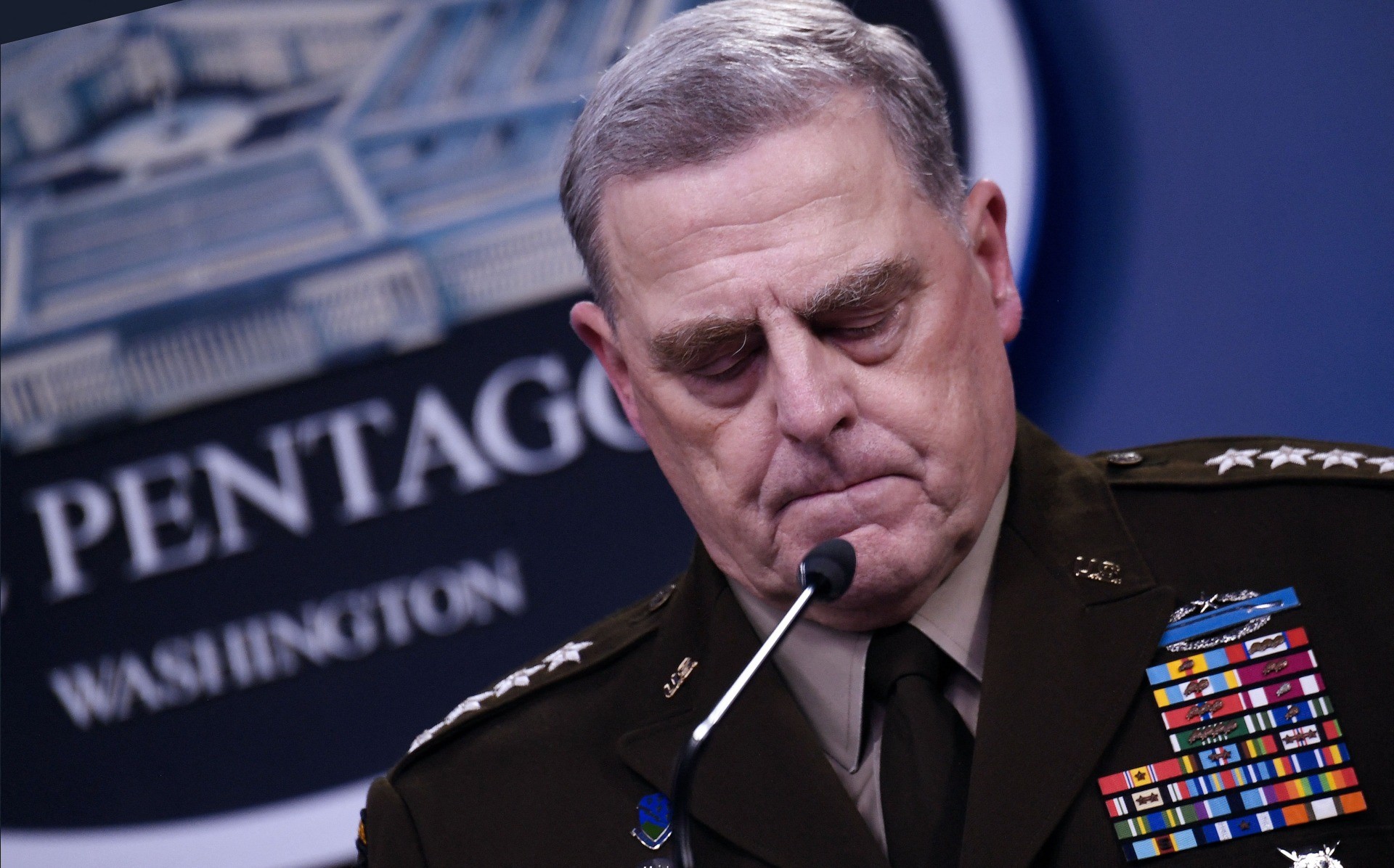 Chairman of the Joint Chiefs of Staff, General Mark Milley, speaks during a press conference about the situation in Afghanistan. (OLIVIER DOULIERY/AFP via Getty Images).

Milley responded, “We had very good intelligence that ISIS-K was preparing a specific type vehicle at a specific type location. We monitored that through various means and all of the engagement criteria were being met. We went through the same level of rigor that we’ve done for years and we took a strike.”

He added, “at this point, we think that the procedures were correctly followed and it was a righteous strike.” 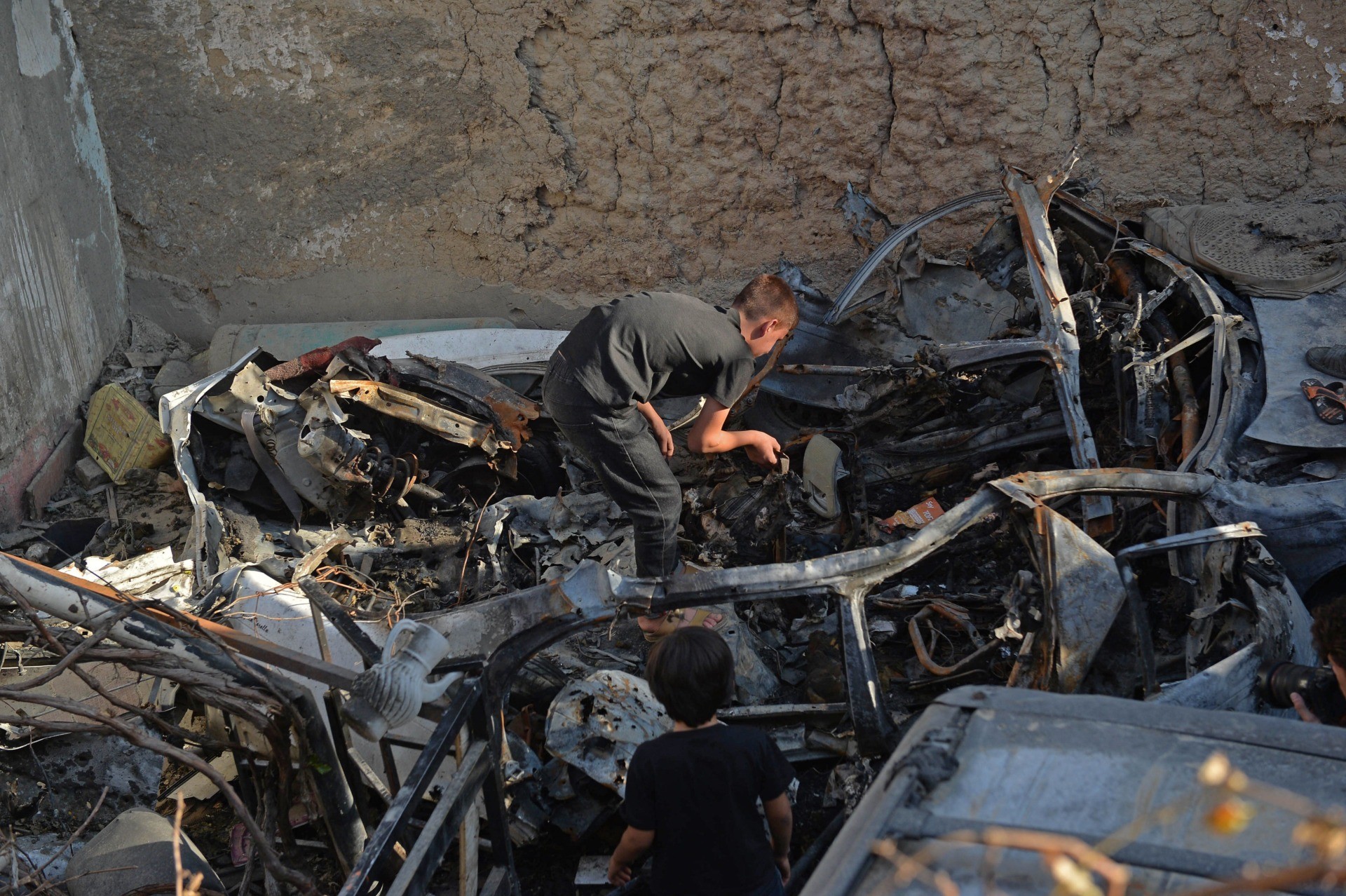 Children inspect the debris of a vehicle that was damaged in a US drone strike. (HOSHANG HASHIMI/AFP via Getty Images).

And Central Command commander Marine Gen. Kenneth McKenzie on Friday said the U.S. military had as many as six MQ-9 Reaper drones surveilling a compound it believed was an ISIS-K compound when a white Toyota Corolla arrived. The military tracked the Corolla for eight hours before striking it as it pulled into a residential driveway, believing it was an ISIS-K attacker gathering explosives for an attack at the Kabul airport.

Instead, it was an Afghan aid worker who had ferried supplies and colleagues around Kabul before pulling into his home, where his children and other family members ran out to greet him. 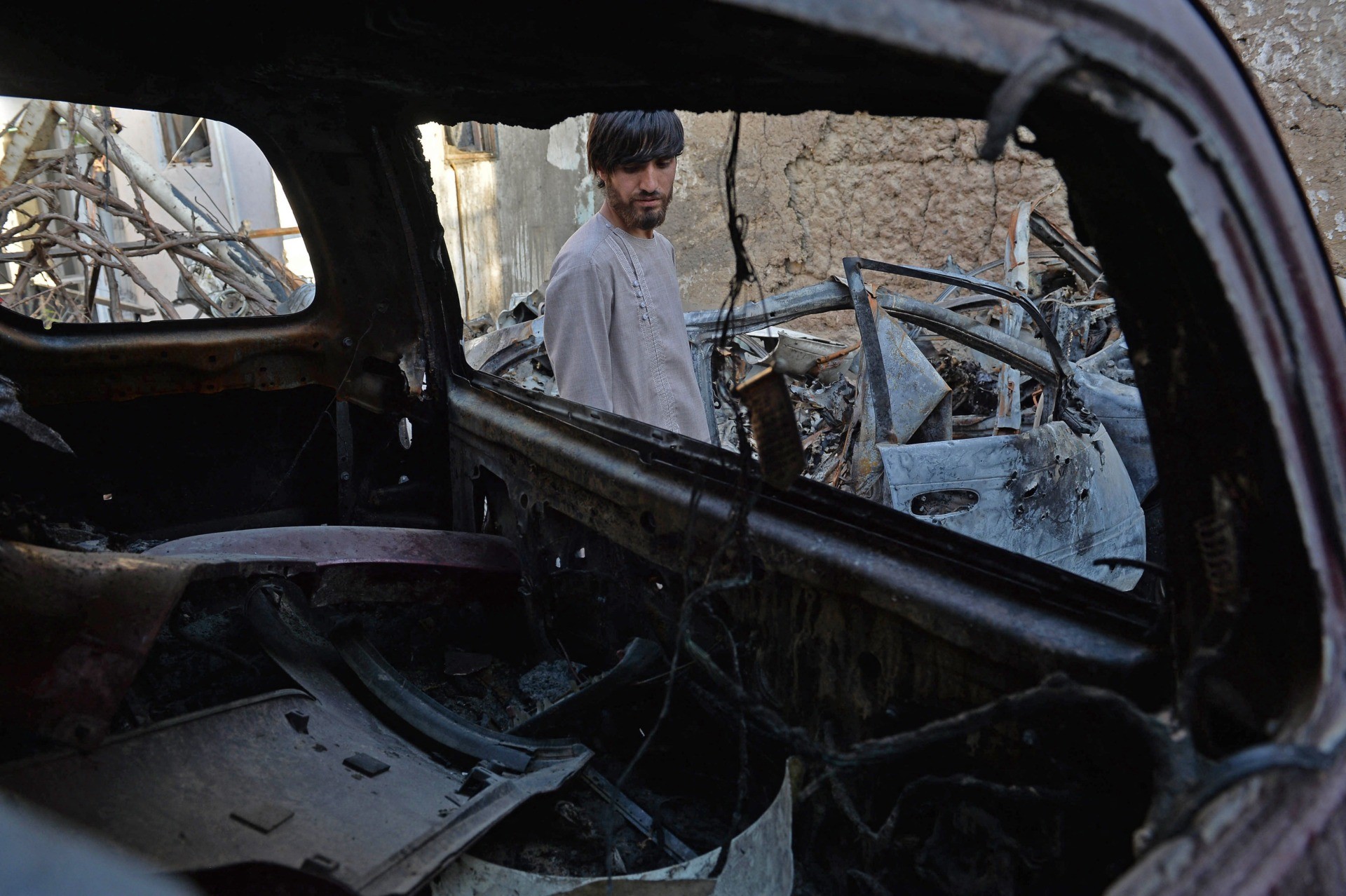 A relative of Ezmarai Ahmadi, is pictured through the wreckage of a vehicle that was damaged in a US drone strike. (HOSHANG HASHIMI/AFP via Getty Images).

When asked by a reporter how the U.S. military could follow a car for eight hours and strike it despite it not heading towards the Kabul airport and with potential civilians on the ground, Pentagon Press Secretary John Kirby said he would wait until the 45-day investigation is done.

As President Joe Biden went forward with his withdrawal of all U.S. troops from Afghanistan, the administration insisted that an “over the horizon” strategy would be effective to manage the threat of terrorism against the U.S. emanating from Afghanistan in the future. 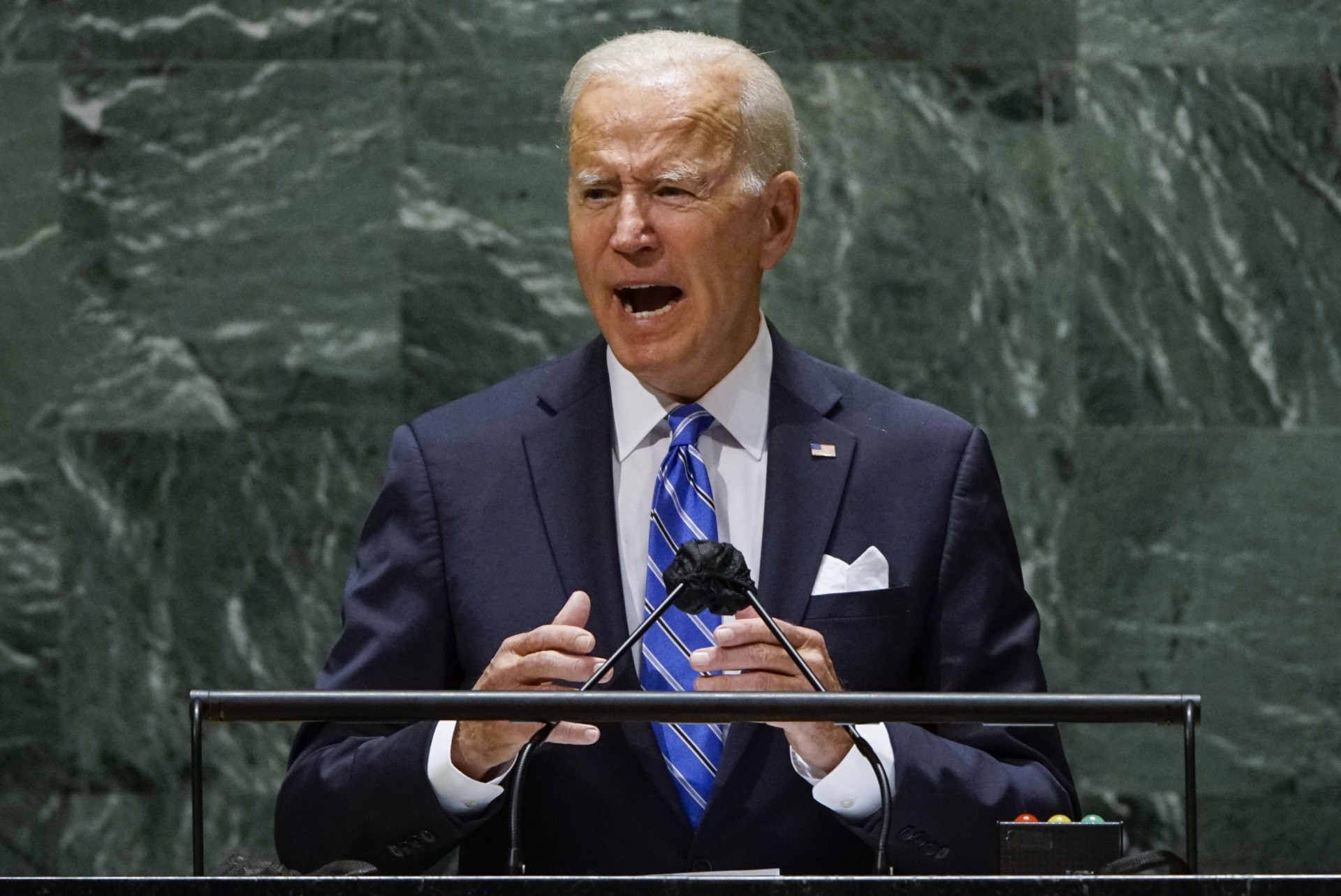 Democrats and Republicans alike have raised questions in the aftermath of the August 29 strike.

“I certainly hope they understand what happened and make sure that never happens again,” Sen. Bernie Sanders (I-VT) said September 19 on CBS’s “Face the Nation.” “This is not only a human tragedy. It reflects on U.S. before the entire world. It’s unacceptable.” 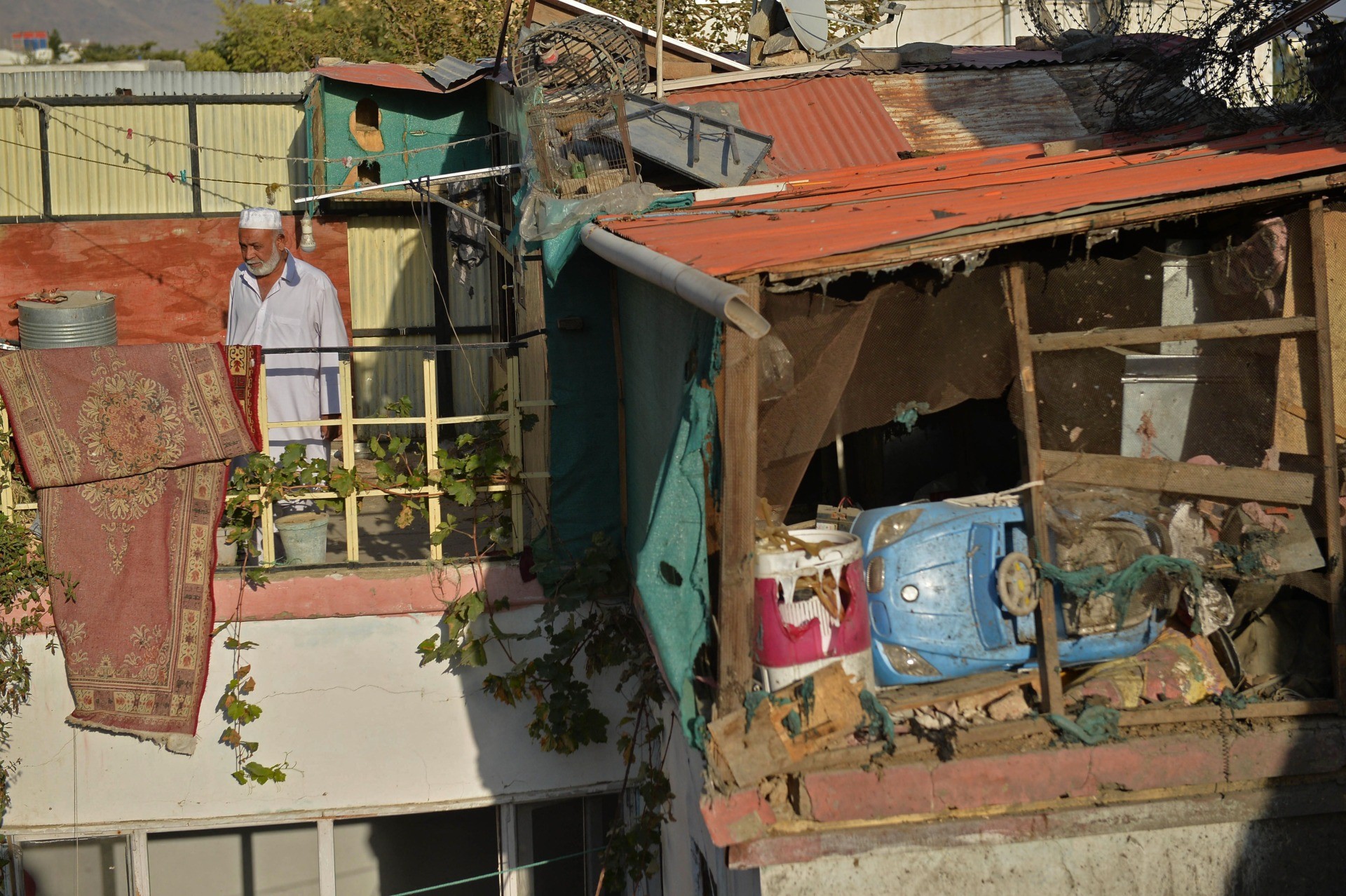 A relative of Ezmarai Ahmadi, stands near a portion of Ahmadi’s house that was damaged in a US drone strike. (HOSHANG HASHIMI/AFP via Getty Images).

Senate Foreign Relations Committee Ranking Member James Risch (R-ID) said at a committee hearing on September 14, “We have yet to receive details about how the administration’s so-called ‘over the horizon’ counterterrorism plan will succeed.”

Over-the-horizon means Qatar, UAE. That’s about a six to eight-hour flight. When I talk to senior military officials, intelligence, it is not close enough to have that eyes and ears on the ground. Remember, we have no presence in Afghanistan anymore. No more military, no more intelligence officials. We are completely dark. And that’s what worries me going back to pre-9/11 without intelligence and also the cache of weapons and cash that they inherited.

While even spy satellites have some issues in collecting intelligence on targets in Afghanistan (e.g., cloudy weather), their air-breathing cousins, who can also collect information—but more importantly, deliver weapons—have even more significant limitations.

As my colleague, John Venable, notes, “The over-the-horizon capability for U.S. assets to identify and strike threats quickly in Afghanistan is limited, constrained primarily by airspace access issues.”

As he points out, Afghanistan is a landlocked country, and overflight permission from foreign governments would be required for airborne platforms to get there. Add to that flight distances and transit times, and you have real challenges.

None of this bodes well for keeping the homeland—or American interests—safe from international Islamist terrorism rising from Afghanistan.

The administration insists that a drone strike, taken two days before the Aug. 29 strike, was successful but the U.S. military has still not released the names of the alleged high-level ISIS members it killed. 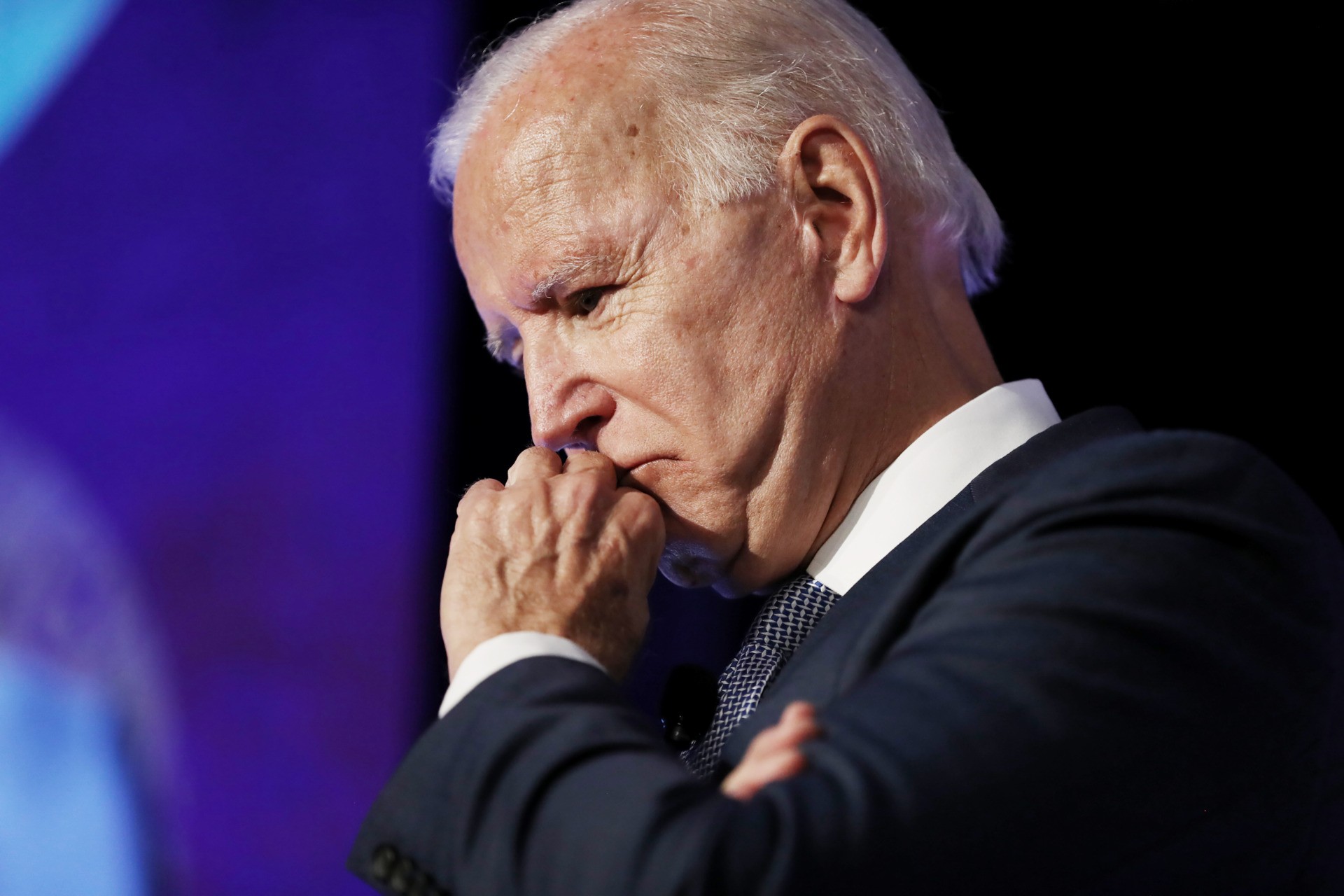 And even Defense Secretary Lloyd Austin says the military now needs to reassess whether the risk of a terrorist attack emanating from Afghanistan is still “medium.”

“Given the rapid collapse of the Ghani government, and the rapid ascendancy now to the power of the Taliban, that he believes it would be prudent to reassess his previous assessment of medium risk in terms of the return of Al-Qaeda or Al-Qaeda affiliates in Afghanistan to a level commensurate with, you know, an ability to threaten the homeland,” Kirby said Monday.