President Joe Biden’s administration reportedly intends to nearly double deportation flights to Haiti to six or seven by Wednesday to ramp-up the removal of thousands of Haitian migrants camped in southern Texas.

On Monday, Department of Homeland Security (DHS) Secretary Alejandro Mayorkas told reporters the administration was anticipating “at least one to three flights per day.”

The next day, however, the Washington Post, citing anonymous U.S. officials and international agencies, reported that DHS is planning to almost double the removal of Haitians by increasing the flights to Haiti “to six or seven per day.”

“We’re talking about potentially up to 1,000 people per day,” Giuseppe Loprete, the Haiti mission chief for the International Organization for Migration (IOM), told the Post, referring to the plans to boost deportations to Haiti. “This is our understanding. This is our challenge.” 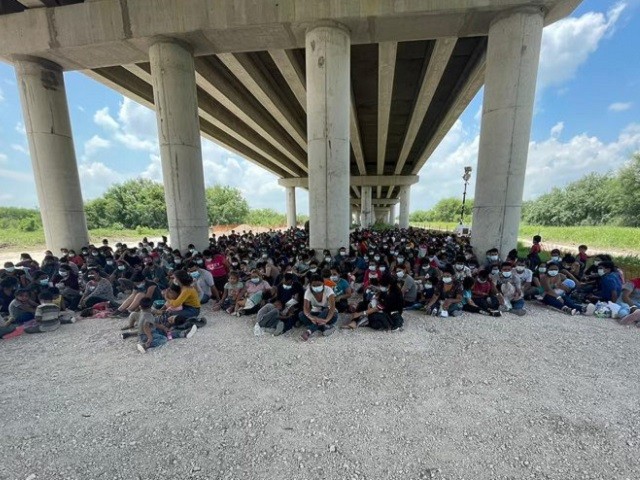 On Saturday, DHS announced it was accelerating “the pace and [increasing] the capacity of removal flights to Haiti and other destinations in the hemisphere within the next 72 hours.”

Between Sunday and Tuesday afternoon, Immigration and Customs Enforcement (ICE), a component of DHS, had removed several hundred migrants daily on an estimated total of nine flights, Tom Cartwright, who tracks repatriation flights for the immigration advocacy group Witness at the Border, revealed via Twitter. Three deportation flights arrived in Haiti from Texas Sunday, two on Monday, and up to four on Tuesday. As of Wednesday morning, ICE had scheduled three removal flights to Haiti.

The total number of passengers flown to Haiti so far is unknown. However, several news outlets learned from DHS and the manifest that the three flights on Sunday, the only day for which a passenger count is available, carried 327 Haitians, providing an idea of the load capacity of each plane. Some reports have indicated that each plane is typically able to carry 100-120 passengers.

Sunday there were 3, yesterday 3 were scheduled but only 2 actually left the US. Today 4 scheduled and as of now 2 have arrived and one in the air. So far, all to Port-Au-Prince. There were also 2 lateral flights from Laughlin AFB .. https://t.co/HhEZWN0vZm

Update. 2 of the 4 flights from Harlingen to Port-Au-Prince have landed and the other 2 should land within the next 90 minutes. As of now I see no others scheduled to arrive anywhere in Haiti today. pic.twitter.com/jyj7gh7zRx

Cartwright has acknowledged that if ICE uses military aircraft to repatriate Haitians, he may not be able to track those flights.

In recent days, estimates for the number of predominantly Haitian migrants gathered at a makeshift camp under the Del Rio International Bridge on the portion of the U.S.-Mexico border in Texas have ranged from 10,000 to 15,000.

The Biden administration is stepping up the deportation of Haitians to deter mass migration into Texas. DHS paused removal flights to Haiti after a devastating earthquake struck the country in August. However, the thousands of Haitians crossing the Rio Grande into Texas each day in recent weeks has prompted the administration to change course.

Mayorkas traveled to the Del Rio region Monday to address the camping situation, reportedly described by some U.S. agents as an unprecedented humanitarian and logistical challenge for immigration officers.

“We anticipate at least one to three flights per day,” Mayorkas told reporters. “The Biden Administration is working with source and transit countries in the region to accept individuals who previously resided in those countries.”

On Monday, Mayorkas also told reporters that his department moved over 6,000 migrants from under the bridge to processing centers.

This Administration is dedicated to developing safe, legal, and orderly pathways for migration.

Due to the influx in irregular migration to Del Rio, Texas, DHS has increased repatriation flights. pic.twitter.com/bHhxGlQT7b

The Biden administration is not deporting all the Haitians who camped in Del Rio.

Instead, it prioritizes single adult Haitians and some Haitian families while releasing unaccompanied children and some families into U.S. communities, NBC News learned from unnamed senior DHS officials. Undercutting DHS’s assertions that the thousands in the makeshift camp in Texas faced immediate deportation, unnamed U.S. officials told the Associated Press (AP) the Biden administration is releasing Haitians from the camp into U.S. communities on a “very, very large scale” with notices to appear at an immigration office, rather than in court.

Nevertheless, left-leaning news outlets, such as the Intercept, have reported that the repatriation effort could amount to the “largest mass expulsion of asylum-seekers in recent history.”

Biden’s plan to repatriate thousands of Haitians has drawn the ire of human rights advocates who say such returns are inhuman given Haiti’s ongoing political, economic, and environmental disasters. Haiti is the poorest country in the Western Hemisphere.