The Marine who pulled an Afghan infant over the Kabul airport wall was honored by Former President Donald Trump during a rally in Perry, Georgia, Saturday evening. Lcpl. Hunter Clark was invited on stage to speak because of his heroic actions in Kabul following President Joe Biden’s botched withdrawal from the now-terrorist-controlled country.

Trump also mentioned how he reserved 13 seats at the front of his rally in memory of the U.S. service members killed in an ISIS-K suicide bombing August 26. “Our hearts go out to families of every service member that we’ve lost and I’ve spoken to a lot of them and these are great, great people,” Trump said.

Introducing Clark, the former president said, “And we’re also honored to be joined by one of the Marines who bravely served in Kabul during the withdrawal and helped evacuate children… over the airport wall… He did a great job.”

Trump shook hands with Clark, asking, “Want to say something? Go ahead.”

Clark, a Georgia native, said, “I am the guy that pulled the baby over the wall and it’s definitely probably one of the greatest things I’ve ever done in my entire life.”

A US Marine, now identified as Lcpl. Hunter Clark, grabs an infant over a fence of barbed wire during the evacuation of Afghanistan at Hamid Karzai International Airport in Kabul on August 19, 2021. (Omar Haidiri/AFP via Getty Images)

“I just want to thank all of the support from all y’all it just means a lot. I’m glad to be home now today, thank you,” Clark concluded.

After Clark left the stage, Trump criticized Biden’s withdrawal strategy, or lack thereof, in Afghanistan. “Biden surrendered our forts and our airbase in Bagram, you know we wanted to keep the airbase because it’s right next to China,” he said. “We were gone and we didn’t even turn out the lights.” 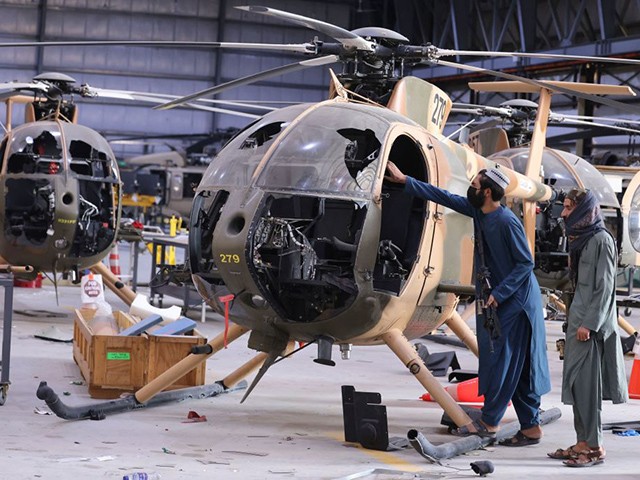 Taliban fighters check the cockpit of a damaged Afghan Air Force helicopter at a hangar at the airport in Kabul on September 14, 2021. (Karim Sahib/AFP via Getty Images)