The office for Vice President Kamala Harris has reportedly reached out to multiple pro-Israel groups and a member of Congress to “clarify” how Harris handled herself after applauding a student who accused Israel of “ethnic genocide.”

A report from Politico laid out what the vice president’s office is doing behind the scenes to control the situation, in addition to looking to “mend relationships with pro-Israel Democrats” after she applauded the remarks made by a student at Virginia’s George Mason University during a Q&A session accusing Israel of “ethnic genocide” instead of pushing back. 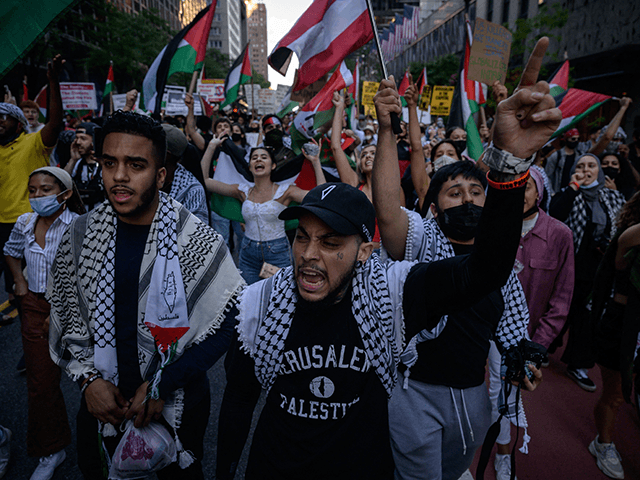 Demonstrators shout slogans and wave flags as they march during an ’emergency rally to defend Palestine’ in Manhattan, New York on June 15, 2021. (Ed Jones/AFP via Getty Images)

The report noted that a senior staffer for Harris contacted Democratic Majority for Israel — an advocacy group that supports pro-Israel policy in the Democrat party in the Congress and the executive branch. Democrat pollster and president of the group Mark Mellman, said, “We were pleased Vice President Harris’s senior staff reached out to us today to confirm what we already knew: Her ‘commitment to Israel’s security is unwavering.'”

When speaking to Politico, Mellman also quoted Harris’s staff, saying the vice president “strongly disagrees with the George Mason student’s characterization of Israel.” Looking to move on, Mellman also mentioned, “The Biden-Harris Administration, as well as President Biden and Vice President Harris personally, have exemplary pro-Israel records, for which we are immensely grateful.”

Another source familiar with the damage control told Politico that Harris’s office reached out to Rep. Ted Deutch (D-FL), a prominent pro-Israel member of Congress and the co-chair of the Bipartisan Anti‐Semitism Taskforce, his office did not comment to Politico on the record. Still, a source said, it was “fair to say that the group of House Democrats that super care about this noticed it and talked about it.”

The report indicated that the vice president’s office also reached out to the CEO of the Anti-Defamation League, Jonathan Greenblatt.

The incident happened on Wednesday, where Harris applauded a student who accused Israel of “ethnic genocide.” 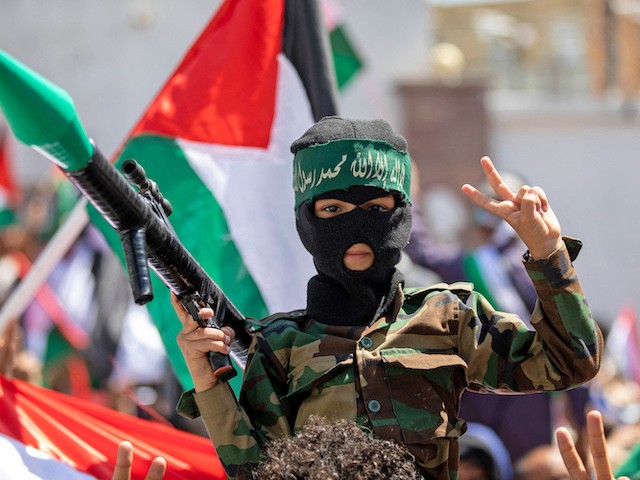 A Yemeni boy holds a mock rocket launcher during a demonstration in Taez, Yemen, on May 22, 2021, celebrating “the victory of the Palestinian resistance” against Israel following a ceasefire. (Ahmad Al-Basha/AFP via Getty Images)

“I see that over the summer, there have been protests and demonstrations in astronomical numbers standing with Palestine,” the student said to Harris during the Q&A session. “But then, just a few days ago, there were funds allocated to continue backing Israel, which hurts my heart because it’s ethnic genocide and displacement of people, the same that happened in America, and I’m sure you’re aware of this.”

The vice president said she was “glad” that the student spoke up, saying, “your voice, your perspective, your experience, your truth, cannot be suppressed and it must be heard.”

On Thursday, the social media account for Iranian state media promoted a clip of the exchange between Harris and the student who accused Israel of “ethnic genocide.”

“Americans are struggling because of a lack of health care, public health care, lack of affordable housing and all this money ends up going to Israel..” the student said at an event on VOTING RIGHTS! pic.twitter.com/n2lTSU4qp3

Towards the beginning of the week, a report from the Washington Examiner revealed that Harris had hired two public relations gurus to repair her “long-term planning” outlook. Breitbart News report:

Lorraine Voles, dubbed a “crisis communications expert,” and former Obama speechwriter Adam Frankel, who worked with the vice president during the presidential transition, have experience drumming up public relations constructs for the White House and the business community.

The White House told the Examiner the two “offered to be of assistance” and will concentrate on “organizational development, strategic communications, and long-term planning.” The White House did not note how long Harris would need the crisis management team but said the two “are on temporary assignment.”

The Hill also reported that Democrats “expect” to see Harris play a significant role in the midterms. The vice president will supposedly be “revving up the party’s liberal base ahead of next year’s midterm elections” in the Democrats’ fundraising and campaign rallies.