The American republic depends on public confidence in election integrity, Mollie Hemingway, senior editor at the Federalist, a Fox News contributor, and the author of Rigged: How the Media, Big Tech, and the Democrats Seized Our Elections, said on SiriusXM’s Breitbart News Sunday with host Joel Pollak.

Hemingway remarked, “You cannot have a republic if you can’t have confidence in elections. If you don’t have free and fair and trusted and transparent elections, you don’t have a republic. This is an existential threat. Everybody needs to care about it and not make it a partisan issue. It needs to be something that everybody understands. Democracy depends, not just on the winner, but on the consent of the loser, and you’re not going to have that if you have corrupted elections.”

Pollak, author of Neither Free nor Fair: The 2020 U.S. Presidential Election, praised Hemingway’s research of the 2020 presidential election in her latest book. He described it as the definitive account of the election’s political corruption.

“You really go into the weeds here, and that’s why this book is so great,” he said of Rigged. “This is really going to be the reference, I think, going forward.”

Hemingway stated, “The mail-in ballot operation was about so much. It was about changing the laws governing how we vote, about flooding the elections with ballots that were going to addresses that maybe weren’t tied to the actual voter, and then also decreased scrutiny aligned with those mail-in ballots — [such as] not having voter ID or not having appropriate signature matches, or allowing ballot harvesting — all these other issues are brought in with this flood of mail-in balloting.”

She highlighted how changes to election laws in various states were implemented, ostensibly, as public health measures to reduce coronavirus transmission.

“I think chaos was the actual goal [of the mail-in ballot operation],” Hemingway stated. “The Democratic operation [is] about changing laws in every state that they can, and just making it difficult to know what the law is, expanding the fear of possible litigation, and then having different standards for the scrutiny applied to ballots.”

She emphasized, “The chaos was the design. That’s what Democrats wanted. They wanted a mess of election laws that they could litigate better or have more opportunities for litigation.”

She continued, “There are a lot of things that can go wrong without [the counting of a ballot] being fraud, but it can still be illegal. … Mail-in balloting [has] much less oversight than day-of-election in-person voting.”

Facebook CEO Mark Zuckerberg’s funding of election operations amounted to a private corruption of what should be an exclusively public endeavor, Hemingway determined.

Mark Zuckerberg spent $419M on nonprofits ahead of 2020 election — and got out the Dem vote https://t.co/XqdjA3oCQm via @nypost

“We had a private takeover of government election offices, funded to the tune of $419 million by Mark Zuckerberg, which brings in an army of left-wing activists to handle everything from voter registration to ballot design, to ballot translation, to get-out-the-vote operations, to ballot counting,” she said.

She concluded, “All of these issues then become very important and systematically corrupt the election process.”

Hemingway assessed that state governments allowing Zuckerberg to fund election operations under the guise of a philanthropic public health endeavor was the product of a failure of imagination on the part of Republicans to envision such corruption.

She said, “[Wisconsin] was one of the states that was hit hard with the Zuckerberg funding that meant that there was a takeover of government election offices by private money, and these people [in Wisconsin] said, ‘We had no idea it was even happening. We never even thought it could happen that one tech oligarch could take over the election administration in our state,’ so they didn’t make it illegal because they didn’t even have the imagination to think it could happen.” 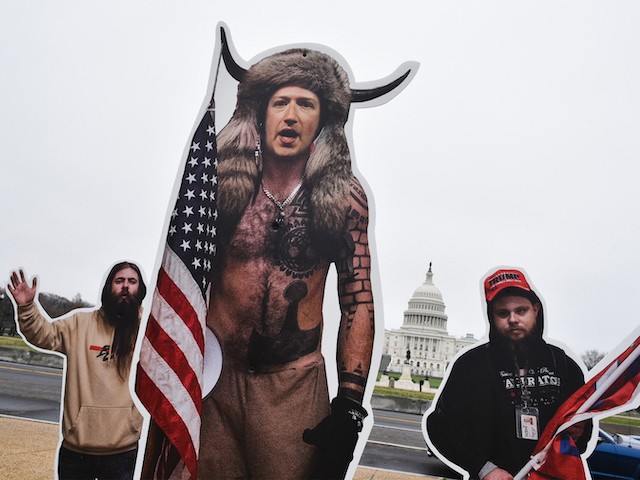 An effigy of Facebook CEO, Mark Zuckerberg (C), dressed as a January 6, 2021, insurrectionist is placed near the US Capitol in Washington, DC, on March 25, 2021. (Mandel Ngan/AFP via Getty Images)

“There was no bar — unbelievably — on private funding of government election offices, by one party or another,” she explained.

Hemingway concluded that Zuckerberg’s partisan objectives seem to have failed in purchasing goodwill with Democrats.`

She stated, “If [Zuckerberg] wanted Biden to win, and clearly he did, it was a good use of money to achieve that outcome, but why he wanted Biden to win was presumably to further entrench power and knowing that Republicans were getting very angry at the meddling and the election interference of Big Tech, the censorship that they’re engaged in, the war on freedom of information, freedom of speech, freedom of the press, [and] all these things that the tech oligarchs are going against.”

“It seems to have bought them nothing, because [Zuckerberg] is completely reviled by many people on the right,” she concluded, “but then also, the left is hankering for more censorship of their political opponents, and they don’t think that Facebook did enough, even after half a billion dollars [and] all of the censorship and the disinformation. All of the meddling wasn’t enough for the Democrats.”