Former President Donald Trump’s forthcoming photo book will include the iconic photograph of House Speaker Nancy Pelosi wagging her finger at him during a White House meeting, along with a handwritten caption from the former president, Breitbart News has learned exclusively.

“She was screaming and shaking like a leaf,” Trump writes of Pelosi in the forthcoming book. “She’s F…ing crazy—hence the name Crazy Nancy!”

The photo and the caption, contained in the book Our Journey Together and provided to Breitbart News exclusively by the former president’s team, capture a high stakes moment from Trump’s presidency just before Pelosi reportedly walked out of a meeting with the then-president. 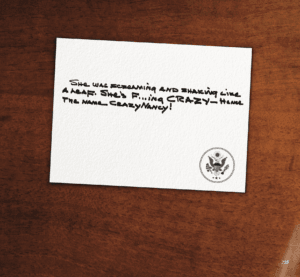 This particular photo has already been public for some time, as Trump tweeted it in 2019 after a heated meeting with Pelosi. Pelosi then tried to co-opt the image, making it her Twitter profile picture, and establishment media outlets praised her for it, framing her as some sort of hero standing up to Trump. It quickly became a Rorschach test, where Trump and his supporters saw what Trump said is an “unhinged” Pelosi acting psychotic in the White House, whereas Pelosi and her backers throughout the media and Democrat Party saw a courageous woman standing up to a president they thought was having, in Pelosi’s words, a “meltdown.”

It is one of more than 300 color photos in the book, and all of them include captions–all of which were written by Trump himself—including several that were handwritten in sharpie like this one. Trump also picked every single photograph in the forthcoming book, published by Winning Team Publishing.

The former president announced the forthcoming book on Friday afternoon, with a statement saying he is “thrilled to announce I will be publishing a wonderful book in time for Christmas!”

“Our Journey Together is a collection of beautiful photos captured during our very successful time in the White House,” Trump said. “From center stage to behind-the-scenes—this is a must-have for all Patriots. Every photograph has been handpicked by me and every caption is mine, some in my own handwriting. Our Journey Together features unforgettable moments from our time in Washington: building the Southern Border Wall; cutting America’s taxes; confirming almost 300 federal judges and 3 Supreme Court justices; rebuilding our military; creating Space Force; dealing with Kim Jong-Un, President Xi, President Putin, and many other world leaders; and battling liberals on two Impeachment Witch Hunts, just to name a few. These proud accomplishments stand in stark contrast to the destruction of our Country taking place right now.This fantastic keepsake chronicles the greatness of the last four years with powerful images unlike anything else that has been published. It would make a fantastic Christmas present. Our Journey would not have been possible without Patriots all across America, where this book has proudly been printed! The MAGA message is being heard—bigger and better than ever before. Remember, our journey isn’t over—the best is yet to come!”

The statement concluded by noting that the book is available for pre-order via the website 45Books.com, and will begin shipping in early December. Sergio Gor, a longtime GOP aide who is the founder of Winning Team Publishing and helping the former president roll out the book, told Breitbart News that in just the first 24 hours after the announcement the former president has sold more than 9,000 copies, pulling in more than $1 million in sales already—and the book is not even live on Amazon yet, only on Trump’s website. Hardcover copies are selling for $74.99 while signed copies go for $229.99.

Congrats to our #1 author! President Donald Trump's new book OUR JOURNEY TOGETHER, over $1M in sales in just the FIRST 24 HOURS! (Over 9k hardcover copies) Avail now at https://t.co/WBzRJw8G95 All without any TV, radio or Amazon sales. Only President Trump could do this! pic.twitter.com/TtwjXrfKbh

“President Donald Trump delivered results for America unlike anyone else, and no other book captures those accomplishments,” Gor told Breitbart News.

The particular Trump versus Pelosi moment contained in this photograph came amid a crucial time in Trump’s presidency, and when Democrats began their concerted push to try to take him out. Pelosi, who had just reascended to the House Speakership after the 2018 midterm elections after eight years of Democrats being in the minority, was meeting with Trump about a number of things, including most notably Trump’s decision to withdraw U.S. forces from northern Syria. On a bipartisan basis, the House voted after that decision to denounce Trump’s move. Democrats and some establishment Republicans charged that Trump was opening the U.S. up to vulnerability from terrorism, but Trump was insisting on ending U.S. involvement in endless war, and he was committed to keeping people safe, arguing that he had already decimated the Islamic State of Iraq and Syria (ISIS) so it was time to bring the troops home from there.

Trump reportedly called Pelosi a “third-rate politician” during the meeting, and bashed his former Secretary of Defense Jim Mattis as the “world’s most overrated general.”

As an angry Pelosi marched out of the room, according to several reports, Trump yelled at her: “See you at the polls.”

History, of course, has proven Trump right and those who criticized him wrong about this decision to withdraw from Syria, but nonetheless at the time Pelosi claimed that Trump was having a “meltdown” over the House vote.

“He just couldn’t handle it, so he kind of engaged in a meltdown,” Pelosi said to media after the meeting. “I think now we have to pray for his health, because this was a very serious meltdown on the part of the president.”

After Pelosi made those comments, Trump tweeted the photo of Pelosi wagging her finger at him—accusing her of having her own “unhinged meltdown.”

The October 2019 incident came at the beginning of the House Democrats’ push to impeach Trump for the first time, as they had launched an “impeachment inquiry” just days earlier that later led to the actual impeachment charges passing the U.S. House in December 2019. Trump was acquitted by the U.S. Senate in early 2020, which in his first impeachment trial saw a majority of senators dismiss the charges. Pelosi would later lead a second push to impeach Trump at the end of his term as president after the election, which also saw Trump acquitted in the Senate. 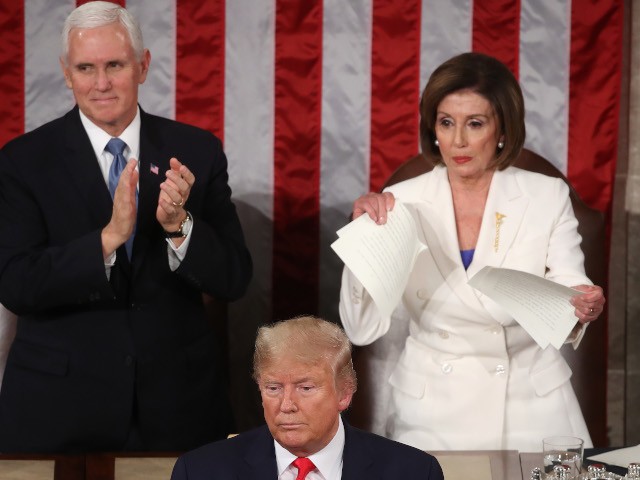 But this iconic meeting was arguably the end of any productive relationship between the then-President and Speaker of the House. From that point forward, the relationship between the two leaders had devolved so badly that they bashed each other repeatedly and Pelosi even on live television ripped up a copy of Trump’s State of the Union address in 2020 when the president delivered the speech to Congress.