Former U.S. Secretary of State Mike Pompeo boasted of the Trump administration’s achievements in the Middle East, including brokering monumental peace accords between Israel and Arab states while bringing Iran “to its knees,” as he condemned antisemitism and claimed standing with Israel is a “means to defend American heritage.” He warned that the Biden administration is seeking to “reverse the historic progress we brought to the Middle East.”

Appearing at the Zionist Organization of America’s (ZOA) annual gala on Sunday evening, former Secretary of State Mike Pompeo, who was being honored at the event, detailed his “proud” achievements in his previous role while expressing his desire to continue serving as secretary of state, seeing that there is “much work” remaining.

“I was proud to lead in the fight in the defense of Israel, the Jewish people, and the perennial cause of religious liberty,” he said. “You should know I’m going to continue to do so.”

Pompeo told attendees of the virtual event that their “work in support of Israel has never been more important.”

“Every time I travel to Israel, I’m always overwhelmed by the country and its people,” he said. “It also reminded [me] why it’s so important that we stand with Israel.”

Claiming there is “no more important task of the secretary of state than standing for Israel,” Pompeo claimed his work remained unfinished.

“I’d like to still be secretary of state,” he said. “There was much work to continue to do.”

Expressing his strong belief in supporting the Jewish state, he cautioned over a decline in supportive policies by the current administration.

“I believe strongly in our support for Israel because of our Judeo-Christian heritage, and I’m proud of the tough choices we made to support Israel,” he said. “But I see them today being eroded relatively quickly.”

Noting that he had the “enormous privilege” of being the first-ever secretary of state to visit the Western Wall with an Israeli Prime Minister, as well as “our embassy in the eternal capital of the Jewish state, Jerusalem,” Pompeo stated he was “proud of the record we had in standing with Israel.” 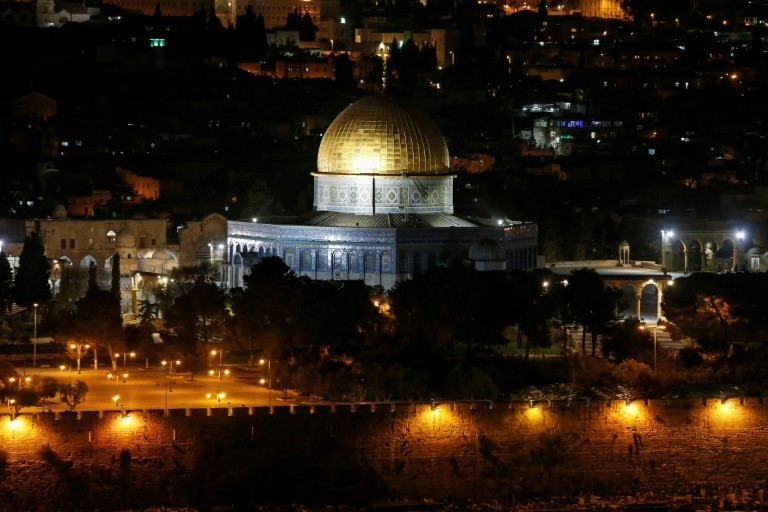 U.S. to open Jerusalem embassy in May for Israel’s 70th anniversary. (AHMAD GHARABLI/AFP)

“We were told, ‘you can’t move the U.S. embassy in Israel to Jerusalem, there’ll be war,’” he recalled. “Well, we did and there wasn’t.”

Pompeo also addressed the Iranian threat as President Biden and his administration attempt to renew the Obama-led nuclear deal which offers Iran sanctions relief in return for promises to temporarily avoid enriching uranium beyond a certain level, following the Trump administration’s withdrawal from it in 2018.

“We were told in the administration, ‘You can’t end the terrible Iran deal because it will make it more likely that there would be war; that Iran would obtain a nuclear weapon,’” he said.

“But we ended our participation in that terrible deal. We applied maximum economic pressure to Iran and to its leadership,” he added. “We brought Iran to its knees.”

He also noted that “ridding the world of [slain Iranian Gen.] Qassim Soleimani meant much to the security of Israel.”

Pompeo also highlighted the significant changes that resulted from the Trump administration’s foreign policy, claiming, “We defended Israel and we changed the Middle East forever.”

“We were told, too, that you can’t secure peace between Arab nations and Israel without buying off Palestinian kleptocrats and starting World War III,” he said. “But we did forge real peace and there was no war.”

“The Abraham Accords rewrote decades of failed shuttle negotiations because we were willing to go against the elites of the foreign policy establishment to secure American freedom and to champion American values,” he added.

“We were told you can’t allow Israel to have its rights in Judea and Samaria and the Golan Heights,” he said. “If you do that, there will be war.”

He called attention to the reality of Israel’s place in the Middle East, claiming Judea and Samaria is “the same territory that some have in recent decades renamed, ‘The West Bank’ as part of their demand for the creation of a 23rd Arab Islamic State.”

“This all takes place in the context of a Middle East where their Arab brothers already control more than 500 times the amount of territory as Israel,” he said, noting that the country of Jordan is “three times the size of Israel — 80% of whose population [who self-identify as] part of the Arab block that officially took the name ‘Palestinians’ only in 1964.”

Claiming “Israel is not an occupier and the hundreds of thousands of Jews and Christians who call Judea, Samaria, and eastern Jerusalem ‘home,’ have a perfectly legitimate right to live there in safety under Israeli sovereignty,” Pompeo lamented “international leader[s]” who, when talking about Jerusalem and the West Bank, “accuse our ally Israel of occupation and of illegal settlement.”

“[Former] President Obama [and former Secretary of State Hillary] Clinton, did this repeatedly, and so has the new Biden administration,” he said.

“Even though these legal terms are just a casual way of calling the Jewish state of Israel a ‘thief’ in essence, they use it,” he added.

He accused “United Nations institutions” as well as the media and “political circles” of using such misinformation “to launch all manner of hostile misrepresentations and condemnations.” 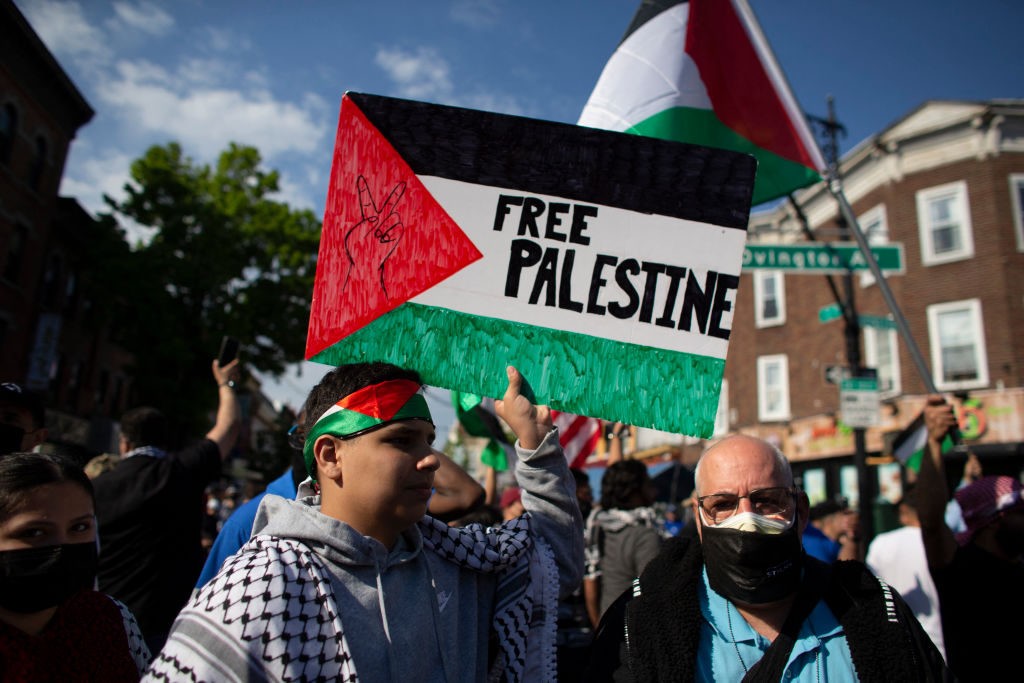 A man holds a “Free Palestine” sign during a demonstration in support of Palestine in Brooklyn, New York on May 15, 2021. (Photo by KENA BETANCUR/AFP via Getty Images)

“They do this to encourage antisemitic boycotts against the Jewish state, to suppress religious freedom for Jews and Christians and ancestral heritage site, and they do it to justify acts of terrorism and mass murder,” he said.

He blasted the notion of Israelis in “land that is rightfully theirs” being labeled an “occupying” force by “many nations and even past US administrations,” an act he said was done to “[justify] the murder of Jews, the rejection of our Judeo-Christian heritage, or even the denial of the right of the nation of Israel to exist.”

“Is there really any legal truth to the accusation that Israel is occupying Palestinian land? You all know the answer is absolutely not,” he said.

He claimed that setting the record straight “as a matter of fact and as a matter of law,” was one of his priorities as secretary of state.

“As secretary of state, I proudly directed to put the hurtful lie of ‘occupation’ to rest within our Department of State as part of a factual, strictly factual, and legal policy stance that has become known to some as the ‘Pompeo Doctrine,’” he said. “It makes clear that Israel exists within its present territory, with legal title and sovereign legitimacy as a matter of international law.”

“This includes the most important city in the history of the world: Jerusalem,” he added, “and all of Jerusalem belongs to Israel and should not be divided.”

Stating that the “pro-Israel accomplishments we’ve worked so hard to achieve in recent years are coming under attack by this administration,” Pompeo expressed his concerns that Israel was being further neglected with time.

“We know what happens when the world turns its back on Israel and her people,” he said. “I worry this is happening more and more today.”

“‘Never again’ must literally mean ‘never again,’” he added. “Not ‘maybe,’ not with any conditions.”

He also accused the Biden administration of “preparing to reverse the ‘Pompeo Doctrine’ to once again suggest somehow that the Jewish state of Israel is an illegal occupier, that the Jewish and Christian heritage there is illegitimate, and to pressure Israel into territorial concessions that threaten the free access and freedom of worship of many faithful pilgrims.”

Warning that antisemitism “is on the rise and it’s up to us to speak out against it,” Pompeo declared the U.S. must stand up against it.

“It’s because I’m a champion of religious freedom that I’m here today to tell you that the United States must stand with the Jewish people and Israel in the fight against the world’s oldest bigotry: antisemitism,” he said.

Claiming “the world’s oldest bigotry has found a new expression,” he called the masking of antisemitism as anti-Zionism “even more alarming.”

“Friends, let me go on record again: anti-Zionism is indeed antisemitism,” he said as he pointed to those who say, “I’m not antisemitic, I’m just anti-Zionist.”

“We must oppose it unequivocally [and] we must fight it relentlessly,” he added.

Pompeo stated that, far from being a target of criticism, Israel was worthy of praise.

“The nation of Israel should be admired, not attacked; embraced, not vilified; it should be emulated, not ostracized,” he said. “This is straightforward.”

Calling to “reject antisemitism here at home and around the world,” Pompeo argued that standing with Israel is a means to defend American heritage.

“When we stand with Israel, we’re defending our own — America’s — Judeo-Christian heritage, ” he said.

Claiming to be “aware of the role that I can play in confronting the classic antisemitic accusation of dual loyalty that confronts Jews around the world,” Pompeo said, “In this sense, Israel is not alone and our interests in supporting Israel are one and the same.”

He went on to highlight the similarities between both countries, claiming it was “no wonder” that Israel and America “find themselves bound together in the eyes of both our friends and of our enemies.”

“Like the modern state of Israel, the United States is a country born from righteous aspirations,” he said. “America’s forefathers expounded at great length upon the importance of ensuring the sacred freedom of heart and mind, and of guaranteeing the right of citizens to life, liberty, and the pursuit of happiness.”

“Israel too, alone among all the countries of this region, defends the rights of its citizens from all backgrounds,” he added. “These principles make our nations exceptional and will always be worth fighting for. Period.”

He also called American support for Israel “a perfect expression of American patriotism because it demonstrates our ability to recognize and defend our own democratic interests and our values with absolute moral clarity.”

“Israel teaches us that we cannot long remain a land of the free if we don’t proactively make sure to be a home of those who are patriots,” he said.

He concluded by calling to “renew our commitment to putting America and Israel and our values first,” claiming that “when we put them first, we prosper and the whole world around us prospers too — there’s more peace.” 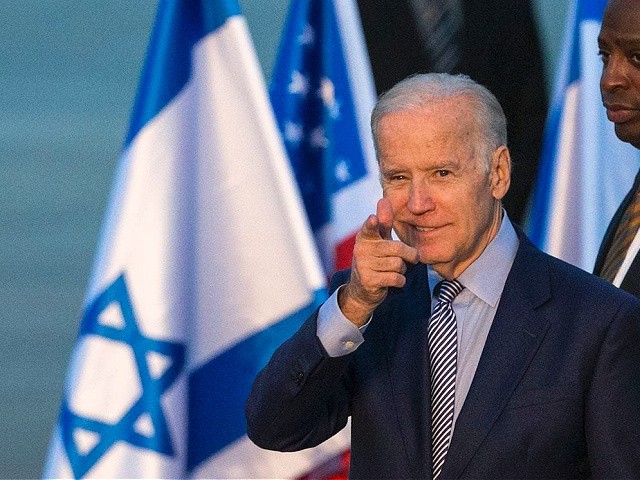 Pompeo’s message comes as an increase in antisemitism, often disguised as anti-Zionism, is seen nationwide.

Earlier this month, the executive director of the Council on American-Islamic Relations (CAIR) in the San Francisco Bay Area called to “know your enemies” as she blasted Jewish organizations, “Zionist” synagogues, and Hillel campus groups whom she accused of betrayal and supporting human rights violations.

Speaking against “Zionists,” a term historically used as a euphemism for “Jews” to avoid charges of antisemitism, Zahra Billoo, who manages one of the largest CAIR offices, called to “oppose the vehement fascists” as well as the “polite Zionists, too,” claiming they “are not your friends.”

Human rights groups and leftist activists have a history of double standards toward Israel as they obsess over Israel’s alleged treatment of Palestinians while routinely ignoring Palestinian oppression against their own.

Despite Israel’s depiction as an apartheid state, Arab citizens enjoy the same rights guaranteed to Jewish and other citizens and are represented in all the branches of government, currently holding a prominent position in the government coalition.

Palestinians, on the other hand, are deprived of basic freedoms — freedom of religion, freedom of the press, freedom of speech, freedom of assembly, LGBTQ rights, and women’s rights — under the Palestinian Authority in the West Bank and under Hamas in Gaza.