President Joe Biden’s long-touted Build Back Better agenda is officially “dead,” according to a recent statement released by Rep. Mike Gallagher (R-WI) who chastised Democrats for erroneously assuming they could initiate “unprecedented progressive change” in Congress, while calling to work together to solve America’s burning issues.

Gallagher released a statement Sunday addressing the “death” of President Biden’s radical Build Back Better framework after Sen. Joe Manchin (D-WV) announced he would not give his support to the act.

“For months, common sense Americans made clear they did not want to create a Civilian Climate Corps bigger than the Marine Corps, double the size of the IRS, and destroy U.S. energy production,” he wrote.

“Joe Manchin listened, and has now put this crazy bill where it belongs: in a fiery (but mostly peaceful) dumpster,” he added.

Calling out the “foolish” assumption that such a bill would easily pass, Gallagher urged Democrats to work together with Republicans to fix crucial issues currently facing America.

“Democrats who foolishly interpreted a narrow majority in Congress as a mandate for unprecedented progressive change made a huge mistake,” he wrote. “Now that their crazy bill is dead, I hope they come to the table to work with Republicans on getting the border crisis under control, strengthening our defense, and getting Americans back to work.”

On Wednesday, Gallagher joined other Republican lawmakers in expressing his hopes that Manchin will leave the Democratic Party for the GOP.

Gallagher acknowledged it was “unlikely” Manchin would do so, but suggested the possibility in the event the far-left continues its “relentless demonization” of him.

“Well, I think it’s unlikely. It is Christmas, so anything is possible. But I suspect even Santa is not that generous to us,” he stated.

“Maybe the only thing that could convince him to switch or register as an independent and caucus with the Republicans, which is far more likely, is if the left, the far-left, continues this relentless demonization of Joe Manchin,” he added. 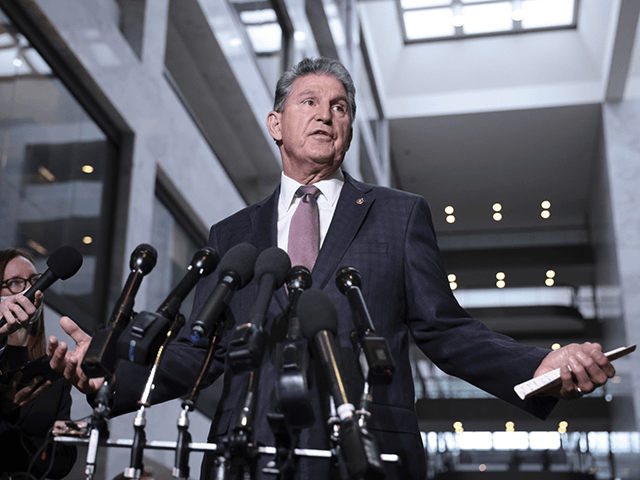 Sen. Joe Manchin (D-WV) speaks at a press conference outside his office on Capitol Hill on October 06, 2021 in Washington, DC. (Photo by Anna Moneymaker/Getty Images)

Democrats have been seeking to pass the bill using budget reconciliation, which requires every Senate Democrat to support the measure in order to pass, even as support for the bill has declined, according to a Politico/Morning Consult survey released this week.

Last weekend, Manchin dealt a potentially fatal blow to Biden’s massive multi-trillion dollar Build Back Better social spending bill after stating he would not lend it support, effectively killing it in its current form.

Manchin said he was deeply concerned about the bill, which he described as “mammoth,” while warning of its potential effects on the U.S. economy through inflation and increased debt.

The House version of the bill includes tax cuts for wealthy Democrats, a massive boost for amnesty and mass immigration, and several carveouts for the far-left’s climate change agenda, as Breitbart News detailed.

Manchin’s decision sparked outcry from members of his own party, with the White House issuing a condemnation of the West Virginia senator on Sunday.

“If his comments on FOX and written statement indicate an end to that effort, they represent a sudden and inexplicable reversal in his position, and a breach of his commitments to the President and the Senator’s colleagues in the House and Senate,” White House press secretary Jen Psaki stated.