CLAIM: White House Press Secretary Jen Psaki on Thursday suggested that Florida Gov. Ron DeSantis (R) has dropped the ball and failed to advocate vaccines for the Chinese coronavirus in his state.

VERDICT: False. While DeSantis has championed individual freedom and placed a special emphasis on lifesaving coronavirus treatment, he also promoted the widespread availability of vaccines — prioritizing seniors and the vulnerable first — earning him malicious attacks from the mainstream media. 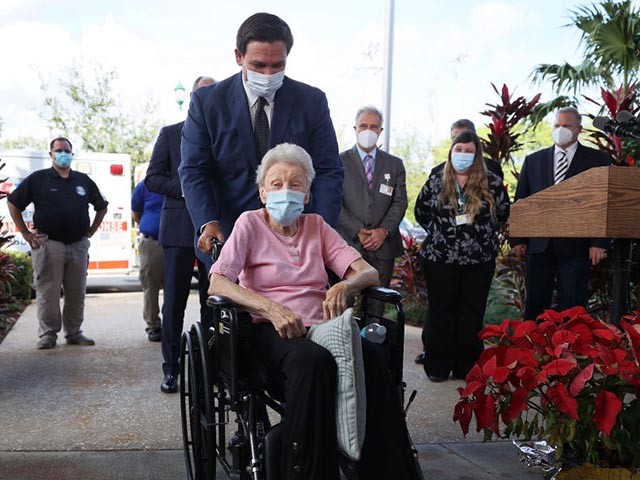 Psaki responded to DeSantis’s remarks after he critiqued the Biden administration’s strategy of mass testing rather than placing an emphasis on the vulnerable population.

“He says that he’ll be sending tests to nursing homes, long-term care facilities, and within senior communities. So, does the White House have any plans to limit tests through the website it’ll be launching to vulnerable communities? And what’s your response to Governor DeSantis?” a reporter asked Psaki, who dismissed the critique:

Well, I would first say that we have taken a number of steps to provide tests at a much larger, expansive capacity than that to vulnerable communities across the country. That has been part of the president’s effort to quadruple our testing capacity to provide the 5 million tests to community health centers, rural health centers, and to work with local health officials to ensure that we’re reaching communities that need help the most. And that is part of our commitment to approaching our effort to get the pandemic under control through — through the lens of equity.

“I would say it’s pretty rich coming from Governor DeSantis, given he is somebody who has been advocating — not exactly advocating for people in his state to get vaccinated, which we know is the way that people can be protected, ways that lives can be saved,” Psaki asserted.

“And if he wants to be a constructive part of this process, then perhaps he should encourage what scientists say is the best way to save lives, prevent and reduce hospitalization, and that is getting vaccinated and getting boosted,” she added.

However, her assertion — that DeSantis has not touted the widespread availability of vaccines — is demonstrably false. While he is not forcing individuals to get the jab, his initial vaccine rollout — prioritizing seniors — was successful and efficient, earning him smears from the mainstream media.

Last April, for example, CBS News’s 60 Minutes maliciously edited a clip of the governor to make it seem as if he dodged a question about pay for play in the state’s vaccine rollout.

“Publix, as you know, donated $100,000 to your campaign,” the outlet’s correspondent Sharyn Alfonsi said. “And then you rewarded them with the exclusive rights to distribute the vaccination in Palm Beach –”

“First, of all what you’re saying is wrong,” DeSantis shot back.

“How is that not pay for play?” Alfonsi responded.

In the segment, the outlet failed to provide his full answer, making it seem as if he dodged the question. In fact, he provided a detailed answer:

“First of all, the first pharmacies that had [the vaccine] were CVS and Walgreens and they had a long-term care mission, so they were going to the long-term care facilities. They got the vaccine in the middle of December, they started going to the long-term care facilities the third week in December to do LTCs,” DeSantis told Alfonsi. “So that was their mission, that was very important and we trusted them to do that. As we got into January, we wanted to expand the distribution points.

“So yes, you had the counties, you had some drive-thru sites, you had hospitals that were doing a lot, but we wanted to get it into communities more. So we reached out to other retail pharmacies: Publix, Walmart, obviously CVS and Walgreens had to finish that mission and we said we’re going to use you as soon as you’re done with that,” DeSantis continued.

DeSantis added that Publix was the “first one to raise their hand”  and to say they were ready to distribute the vaccine. The vaccine was then rolled out on a “trial basis” in three counties; seniors gave the rollout “100% positive” feedback.

60 Minutes’ fake news narrative was so out of line that it prompted Publix to release a statement as well, dismissing it as “irresponsible,” as well as “absolutely false and offensive.”

That aside, over the last year, DeSantis has continually promoted his simple position that the Chinese coronavirus vaccine should be “available for all, but mandatory for none,” giving Floridians the choice to get the shot — a choice the Biden administration evidently takes issue with.