Sen. Roger Marshall (R-KS) spoke to Sirius XM’s Breitbart News Daily guest host Jerome Hudson on Thursday and contrasted government imposition of mask-wearing decrees and vaccine mandates — ostensibly to combat the coronavirus transmission — with its acceptance of migrants from across the southern border without masking or testing requirements.

“We’re going to make five-year-olds get vaccines and wear three masks, but we’re not going test or even require vaccinations on people coming into our country,” Marshall said.

Hudson remarked on the Biden administration’s demand that military servicepersons receive the coronavirus vaccines as conditions of continued employment in the armed forces. 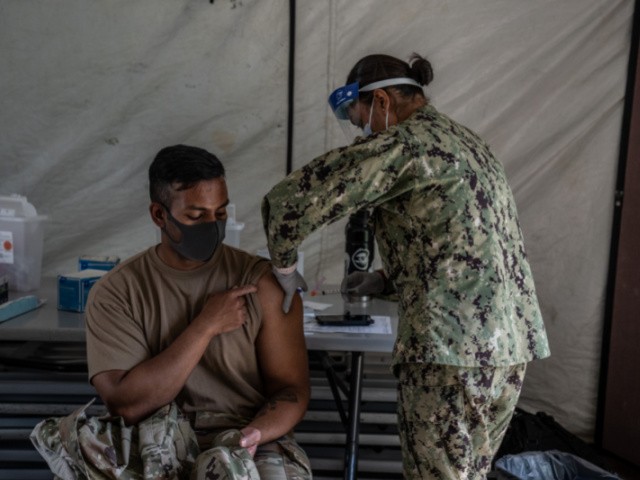 A member of the United States military receives the Moderna coronavirus vaccine at Camp Foster on April 28, 2021, in Ginowan, Japan (Carl Court/Getty Images).

“It’s absolutely despicable and disgraceful,” he remarked, “particularly now that we have over a million illegal immigrants [across the federal government’s past fiscal year] in this country that weren’t even tested for COVID-19, and Border Patrol agents who are risking their lives to keep these people out of the country are also under the same mandate by this despicable administration.”

Marshall replied, “America understands the hypocrisy. … I’ve been at the border three times, and what I’m told is about 20 percent of the people crossing the border are carrying COVID, and then what we do is we put them in a bus, let them spread it around. Then we put them…what I’m going to call a gymnasium, and then we all send them to one hotel.” 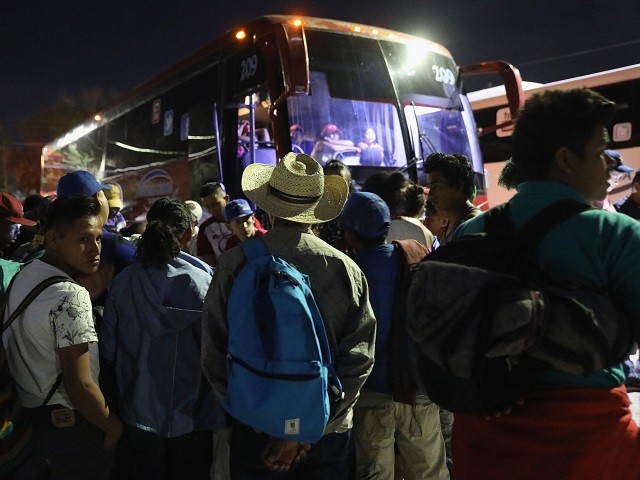 “[Migrants are] carrying the virus,” he added. “They’re bringing in variants, and, of course, it’s not just COVID that I’m worried about. A lot of these countries that people are coming from have high rates of tuberculosis, drug-resistant tuberculosis, as well as measles and mumps, and a whole host of other communicable diseases, [such as] hepatitis.”

He continued, “This is hypocrisy.  … At least a third of the people coming into the country are reducing the vaccine. It’s even worse than America knows.”