Tampa Bay Buccaneers receiver Antonio Brown allegedly sought to obtain the false coronavirus vaccine authentication card to get out from under the league’s virus protocols, the Tampa Bay Times reported.

The paper cites the claims from Brown’s former live-in chef. The chef, Steven Ruiz, shared a text message from July 2 in which Brown’s girlfriend — model Cydney Moreau — asked him if he could help Brown get a fake Johnson & Johnson single-shot vaccine card in exchange for $500.

Morgan did not strictly refer to Antonio Brown by name in the text but did use initials, saying, “Ab said he would give you $500.”

The paper added that Ruiz quit working for Brown over unpaid salary totaling as much as $10,000.

Ruiz further claimed he never did buy any fake vaccine cards but later learned that Brown found the counterfeit cards on his own. Ruiz added that he saw the cards sitting on Brown’s dining room table.

The former Brown employee went on to say that personal trainer Alex Guerrero visited Brown to help him recover from knee surgery, took photos of what Ruiz feels are fake vaccine cards, and sent them to Bucs officials to prove Brown was vaccinated. Ruiz said he didn’t believe Guerrero understood he was dealing with counterfeit vaccine cards.

“Antonio Brown appreciates the severity of the pandemic, which is why he got the vaccine and supports everyone for whom it is advisable to get the vaccine. Coronavirus has hit close to home as it took him out of a game. He is healthy, vaccinated, and ready to win another Super Bowl,” attorney Sean Burstyn told the paper.

“One of the worst parts of the pandemic has been a movement to cast doubt on our country’s vaccination programs with baseless, vindictive tabloid gossip,” he added.

Brown has not made a statement on the matter. But Bucs coach Bruce Arians told the media that his team and his front officers are “100 percent vaccinated,” so it appears that the team assumes Brown has had a legitimate vaccination. 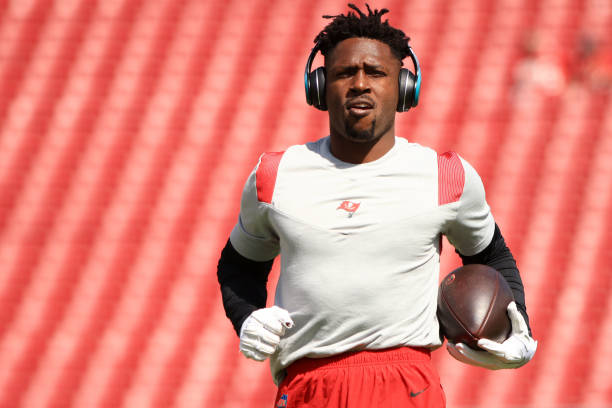 TAMPA, FLORIDA – OCTOBER 10: Antonio Brown #81 of the Tampa Bay Buccaneers warms up prior to the game against the Miami Dolphins at Raymond James Stadium on October 10, 2021 in Tampa, Florida. (Photo by Mike Ehrmann/Getty Images)

The 33-year-old player is recovering from a foot injury sustained on October 14 and will be sitting on the sidelines during Thursday night’s game.

Brown already missed one game this season after testing positive for the coronavirus, which forced him to sit out the team’s game in Week 3.

Brown, who has a long history of troubles with the league over his often wild behavior, was suspended for the first eight games of the 2020 season for violations of the NFL’s personal conduct policy.